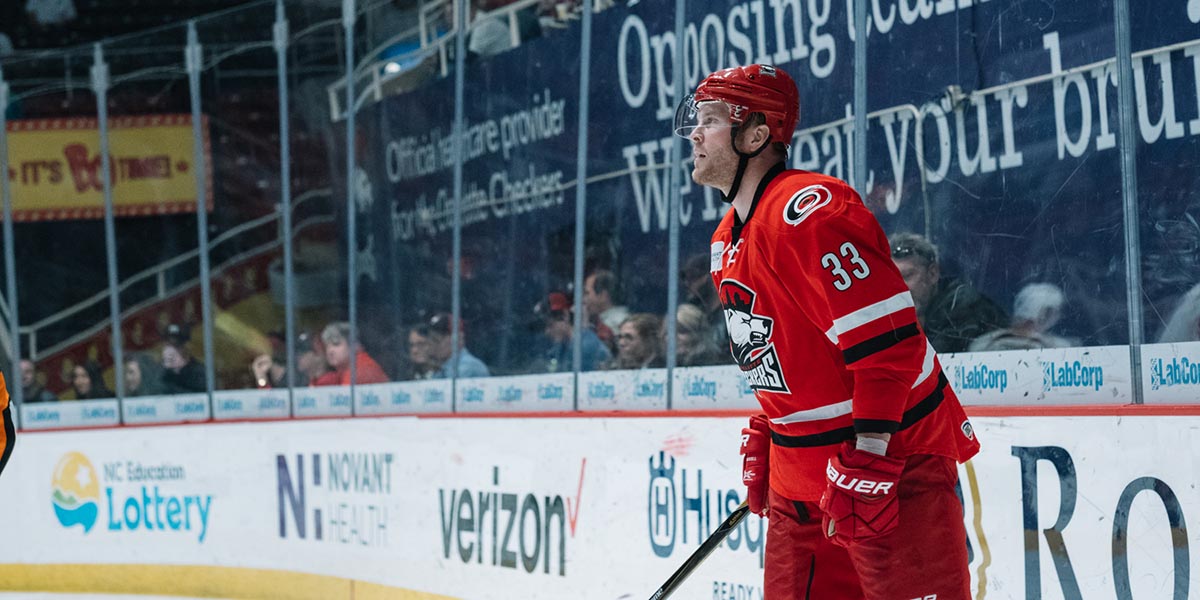 “I am hopeful I will be able to return to the ice and continue playing the game that I love."

In a Nov. 11 statement to announce his recent diagnosis with multiple sclerosis, Bryan Bickell made clear his intentions to keep his career going. Four months later in Charlotte, he did just that.

“It was a long wait to get that game, but that first game’s over with,” he said following Saturday’s contest. “It feels pretty good.”

Bickell’s last game prior to Saturday came with Carolina on Oct. 30. It was following that game that he would receive the diagnosis.

“I didn’t really know much about MS,” said Bickell. “I knew when the doctor brought me into his office and how his body language was that something was wrong. When he told me, I didn’t know much about it. And then over the weeks I learned a lot about it because of the circumstances.”

Bickell saw somewhat of a silver lining in the news, in that the unknown issues that had been lingering with him had finally been identified.

“I knew something wasn’t right for a year or so, so getting the news was deflating but also relieving at the same time to get the results and to move on,” he said.

Since last appearing for Carolina and making his diagnosis public, Bickell worked diligently toward that goal of returning until, finally, it was within reach.

“I’d say probably a month ago,” said Bickell of when he turned the corner and saw the comeback as a reality. “Physically I was getting back. I didn’t work out for a couple months and it’s true that if you don’t use it you lose it. I was kind of fading away. But to get back into on-ice shape and lifting weights and feeling good on and off the ice was about a month ago. Mentally, it was a hard task, but I think I attacked it the right way.”

The 30-year-old was eventually able to rejoin the Hurricanes at practice and then, with that first hurdle out of the way, he and the organization began to set a plan.

“We’ll see how I feel getting some games here because it’s been over four months,” said Bickell. “I’ve been practicing and working out for the last couple of months in Raleigh, but to get in some games and get some timing and the feel is the biggest thing. [Hurricanes GM] Ron [Francis] just wanted me to get comfortable and get my game back. They want to give me a shot back up there hopefully as a part of their run. They’re still not out of it, there’s still some fight left, but for me to feel comfortable here is important.”

Before hitting the ice, Bickell found a confidant in former Minnesota Wild netminder Josh Harding, who was similarly diagnosed with MS during his playing career. Aside from sharing support and stories, Bickell learned some key knowledge to take into his comeback.

“I’ve talked to Harding on the phone and through text just to see the experiences he went through,” said Bickell. “A big thing is overheating. He always talked about the things that he did between periods and during TV timeouts that helped him cool down. I haven’t had too many symptoms but I haven’t played too many minutes yet. I’m sure if I get up in the minutes I’ll have to do something. But for him I know he had one of the better years in his career after his diagnosis, so if I can progress like that and get better that’s a step in the right direction.”

In his first game since the diagnosis Saturday, Bickell filled in on the left wing of Charlotte’s fourth line, easing his way back into game action. The veteran forward has a knack for scoring at the AHL level, with 140 points in 275 career games to his name, and, despite comparing the nervousness he felt to his NHL debut, Bickell was a difference maker for the Checkers, picking up a primary assist along the way.

“It was nice to get that feeling,” said Bickell. “I know I was a little rusty out there but to get the feel and the timing back was special, especially not knowing if this day was ever going to come. It was kind of rough, but we got that through and we got the win, which was the most important thing. “I don’t want to say I felt good that night, but I felt OK and hopefully we’ll make progress.”

Bickell’s journey back to the ice has been an endearing one that has drawn him support from across all fandoms. Now he’ll get to hone his game in the friendly confines of Bojangles’ Coliseum, as the Checkers continue their extended home stand.

“It worked out that we had just home games so I don’t have to go on the road for a while,” said Bickell.

“Hopefully we progress in the right way and it’s nice to get a couple of home games in front of my wife and my two kids to come watch this game. I know they’re excited, and I got a couple of texts from family and friends who are posting tabs and wanted to see how this game went.”

Bickell also extends gratitude toward the Carolina organization for their handling of his situation.

“They’ve been really supportive,” he said. “Ron and the training staff have been great with their communication and the things that they’ve let me do to get better. Obviously it’s a different circumstance for a lot of teams, they don’t see this that much. But overall we’re very thankful to have the doctors and the people that are around the Canes to help me and my family out through the hard times. It was overwhelming.”

While there’s still plenty of work ahead, Saturday saw Bickell take that first step in making true his proclamation from November.

“There are long ups and downs, but it’s nice to put a uniform on, play with the team and do what I’ve been doing my whole life,” said Bickell. “It was pretty scary in the first month about if this day was going to come, but I’m happy that it came.”

If anything can be taken from the last four months, it’s to not count Bickell out.

“A few months ago I was thinking about what’s next, but now it’s about how much longer I can go and how I can help whatever team I’m on. From the first month where I didn’t know if I was ever going to lace up the skates and play again to where I am now, I’m definitely relieved. I’m happy to be where I am now. My goal is to play in the National Hockey League again. Whether it’s this year or next year, we’re taking it day by day.”