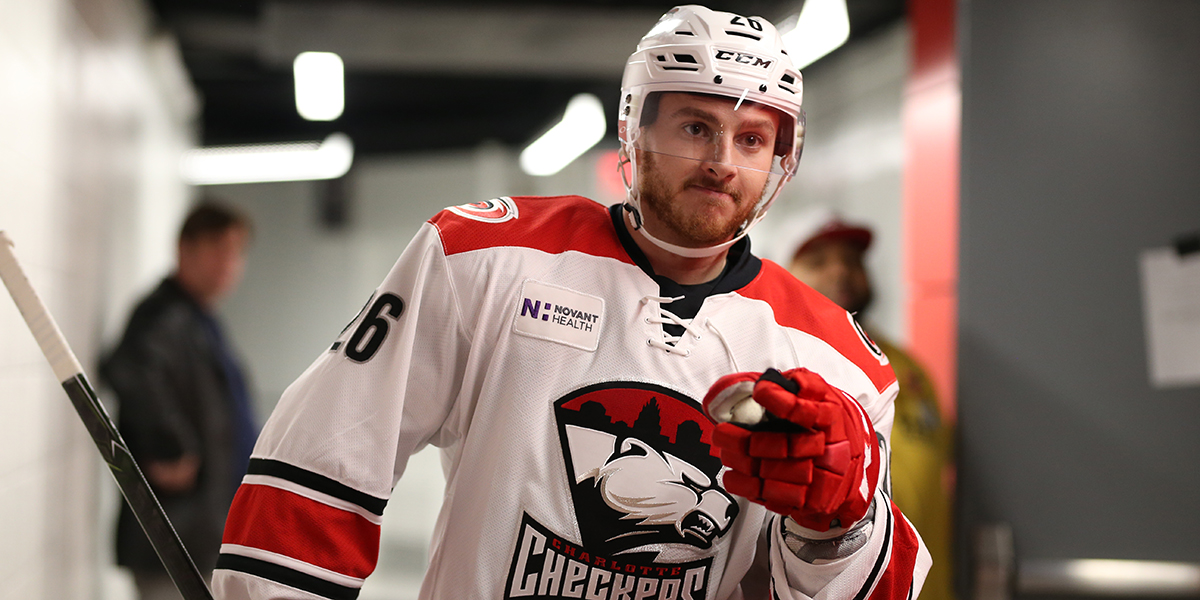 After a scary situation that left fans and players alike concerned, Connor Brickley has good news.

The third-year pro, who has missed the last seven games for Charlotte, joined his team for morning skate and will be in tonight’s lineup.

“I didn’t make the road trip so I had about two weeks to recover and have a lot of rehab,” said Brickley. “I feel good and I’ve progressed really well so I’m going to give it a shot tonight.”

The cause of Brickley’s absence came on Nov. 26, when the forward was knocked unconscious during a fight. He lay motionless on the ice for several minutes while medical staff attended to him and eventually transported him from the ice to the hospital.

Fortunately, nothing was as serious as it initially seemed or could have been. Brickley was alert and moving upon arriving at the hospital and was back at the rink that same night to watch his team play, although sidelined with a concussion.

While things ended up being fairly fine, the medical staff from the team and the building showed great poise and preparedness in dealing with the situation.

“You try to do as much in the offseason as you can because that’s the time when things are quiet and you can plan for something like that,” said Checkers head athletic trainer Brian Maddox. “We talk to Novant Health and get everyone on the same page with the protocol. We also go through it with the Hurricanes guys to see how they do it up in Raleigh with their emergency management. They always do a mock event right before the season starts and I usually attend and try to get as many ideas of the best ways to do things.”

Brickley didn’t escape the incident completely clean, however, as a concussion can be a serious injury. The forward spent the last few weeks rehabbing in Charlotte while the team was playing in California, working his way back to being 100 percent, but even as he began to feel better, there is a stringent system put together to make sure he is completely cleared before returning to action.

“I think the biggest advancement in the past four or five years is just having the tools where it’s not just reliant on the athlete saying, ‘Yes I feel good’ or, ‘No, I don’t’ and them being honest with you,” said Maddox. “We have a lot more tools that different practitioners have used, from vestibular to eye movement, and we work with different health professionals to look at what occurs during a concussion and then making sure we have objective measures to make sure the guys are back to normal.”

“They take it out of the player’s hands,” said Brickley. “Players always want to be out there and playing, but there comes a point where the doctors are in charge and you have to do what they say.”

Brickley is now completely cleared and skated with the team for the first time this morning. The next step for the forward is getting into a game.

“You just have to gain that confidence back,” said Maddox. “There’s only so much I can do in the training room. They have to go out on the ice and perform the task to realize that they’re back to normal and this will be fine.”

“There’s an adjustment with any kind of injury that you have, especially the more time you miss,” said head coach Ulf Samuelsson, who logged a long NHL career. “You need to be back on the ice and get your confidence back once you’re 100 percent again. It takes a hit or two before you really trust what was hurt before.”

For Brickley, who hasn’t had any prior head injuries, the key will be returning to his normal thought processes come game time.

“This is the first concussion I’ve had, so I think the best way to approach it is to hit the ground running from my first shift and play the way I would normally play and see how it goes from there,” said Brickley. “You can’t suit up if you’re afraid. You just have to go out there like nothing happened before. That’ll be my approach.

“I play a certain style. I play physical every night and things like that happen because of it. In my career so far I’ve been more than willing to drop the gloves and that’s going to keep happening.”

In terms of the Checkers’ roster, Brickley returning is a welcome addition. Joining him as a new face up front tonight will be Phil Di Giuseppe, who was assigned from Carolina yesterday. The third-year pro racked up seven points in eight games during his last stint with the Checkers and should provide a jolt for an offense that has been anemic over the last few weeks.

“He’s an NHL/AHL player right now just trying to take that last little step to be a full-time NHLer,” said Samuelsson of Di Giuseppe. “So he’s obviously going to be a big boost for our team.”

While they received an influx of two incoming forwards, the Checkers also lost a piece in Kris Newbury. The veteran PTO-signee missed the California trip finale in Ontario and will not be in the lineup tonight, though Samuelsson indicated he is just day-to-day with an upper-body injury.

The blue line has been an especially banged up are for the Checkers as of late, and tonight will be no different, with the team receiving some good and bad news this morning.

The good news is that Haydn Fleury will be making his return to action tonight after missing the last seven contests with an upper-body ailment.

“He’s good to go, he got the greenlight from the doctors,” said Samuelsson. “We’re excited to have him back. He’s having a tremendous year. He’s learning how to be an everyday player, compete every shift and really increase his battle level. He’s developing really nice.”

The bad news is that fellow rookie Roland McKeown is sidelined. The defenseman left the bench during last Saturday’s loss to Ontario and did not return.

“He’s out,” said Samuelsson of McKeown. “He’s out for probably a couple weeks here at least, maybe a little longer. That’s a big blow for us.”

While the two rookie blue liners swap positions, the Checkers will still be without Trevor Carrick, who did not make the California trip and is yet to rejoin the lineup.

“He’s not back on the ice yet, he’s still nursing an injury,” said Samuelsson of Carrick. “It’s tough to put a timeline on him, but I’d say he’s week-to-week.”

In one final lineup note for tonight’s meeting with Manitoba, Samuelsson tipped his hand in terms of the coaching staff’s plan for netminders Alex Nedeljkovic and Daniel Altshuller. The rookie Nedeljkovic has taken the bulk of the starts as of late (eight of the last ten to be exact), but there could be a bit of a shake up ahead.

“Altshuller is in net tonight,” said Samuelsson. “Going forward it’s one of those things where it’s not really a clear plan yet. We have some ideas of what we want to do looking at the schedule here, but a lot of it will be performance based right now.”