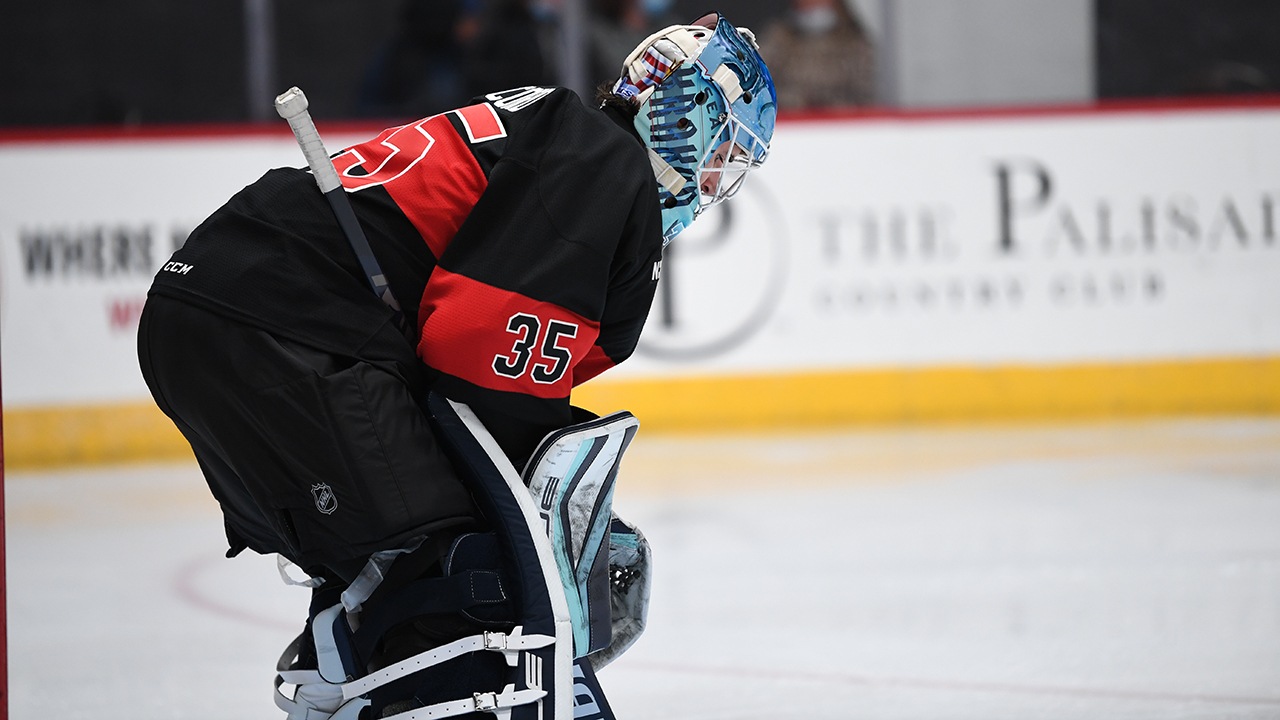 Joey Daccord’s pro career may be relatively young, but it’s been a journey.

The winningest goalie in program history at Arizona State wrapped up his senior year and immediately made his pro debut at the NHL level with the Ottawa Senators. Then he spent his first full season split between the ECHL and AHL. Then he worked his way back into the picture in Ottawa last season, appearing in eight contests.

Then came the expansion draft, where he was selected by Seattle and all of a sudden became a part of the goalie platoon for the league’s newest club.

While the selection certainly shook up Daccord’s whole world, it also offered a rare chance to start fresh in a brand new market that has been waiting years for this moment.

“I was super excited,” said Daccord. “To be a part of a new team is incredibly cool. Especially Seattle, people up there are going nuts for hockey. It was really cool to be a part of that.”

The fanfare of the expansion draft process quickly gave way to the grind of preparing for a season. After partaking in NHL training camp, Daccord came to Charlotte with the Kraken’s message at the forefront of his mind.

“Just work my butt off,” said Daccord. “They want me to work hard, play a lot of games and get better. Basically be ready for when they need me, is what I was told.”

As it turns out, they needed him pretty quickly.

After logging one game with Charlotte, an injury up top had Seattle summon Daccord on October 19. That same night he would make his Kraken debut.

“That’s one of the first things that [Seattle Goalie Coach] Andrew Allen told me,” said Daccord. He said ‘Hey, when you come up we’re not afraid to put you in there.’ Which is awesome.”

Daccord would make one more appearance for Seattle before returning to Charlotte, where he has worked in a rotation with Christopher Gibson and Antoine Bibeau.

“We’re only a couple weeks into the NHL season and I’ve already got two NHL games and a couple down here,” said he said. “It’s great. I just want to play.”

While it can feel like the 25-year-old has been around for some time - he was taken in the 7th round of the 2015 draft and made his NHL debut in the 2018-19 season - Daccord is still looking to put some games under his belt.

“I think I just hit 50 pro games in the last couple weeks here,” said Daccord. “I’m in my third pro year but because of Covid and stuff I haven’t played a ton of hockey. So I just want to keep playing, keep developing and get more experience.”

Early on in his tenure with the Checkers, Daccord has put up strong performances and exuded confidence from the crease to a newly assembled team working to find their identity.

“He has a great command back there,” said Head Coach Geordie Kinnear. “He brings a lot of swagger to the group. He comes to work every single day and he makes us a better team when he’s on top of his game.”

With a taste of the NHL already this season, Daccord’s play in a Checkers sweater is indicative of someone who is not only primed to be a standout in Charlotte, but someone who is ready to take that next step.

“That’s why we’re all here - to get to the NHL,” said Kinnear. “The drive has to be there, it doesn’t matter what has happened to you in the past, you need the drive to get better every single day. You look at [Daccord], he’s probably the last guy to leave every day. He’s got a lot of drive to get to the National Hockey League, but he also has the drive to help us down here to win hockey games.”

Daccord’s whole world may have changed when Seattle called his name at the expansion draft, but with that change came a once in a lifetime chance.

“That’s all professional hockey is, you just want an opportunity,” he said. “They’re giving me one and I’m really appreciative of that.”