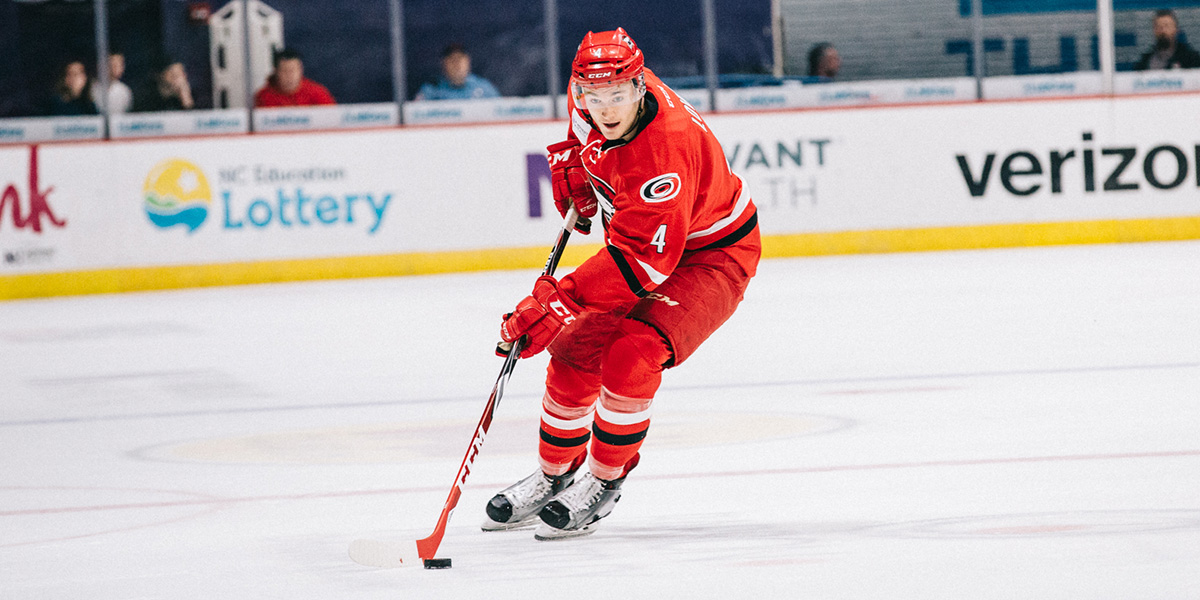 Don’t look now, but Keegan Lowe might be quietly on his way to another career year.

After setting a career high with 14 points last season, Lowe is on pace to top even that this year, picking up 11 points through just 40 games to rank second among team defensemen.

But while his offensive prowess has continued to grow, it’s a different aspect of Lowe’s game that has taken center stage.

With four pro season under his belt, Lowe is the most experienced player on a very young Charlotte blue line. A veteran of over 200 AHL games, the 23-year-old has become a stabilizing force of leadership on the Checkers’ back end, something he embraces.

“It’s a role that I love playing,” said Lowe. “Leading by example and saying the right things when you can, but at the same time showing with your work ethic and how you play and what you do in the room. I think that shows more than talking and screaming all the time.”

Charlotte’s defensive corps has seen its fair share of adversity so far this season, with injuries causing all kinds of turmoil across the roster. In fact, of the seven defensemen currently on the Checkers’ roster, three – Haydn Fleury, Roland McKeown and Trevor Carrick – have all missed at least five games due to injury through the first half of the season, while Matt Tennyson, originally slated to be a top defenseman for the team, was recalled to the NHL on Nov. 11 and hasn’t been back since. Those losses forced the other skaters to raise their level of play.

“Everyone’s done a good job,” said Lowe. “We’ve had a lot of healthy bodies and then no healthy bodies. It’s seemed to come in waves this year. But I’ve always been a guy who likes to see those minutes and thrives when I get those minutes. You just take it as an opportunity. Anytime a guy goes down, everybody has to step up. We have seven capable bodies and everybody is confident in everybody.”

Selected in the third round of the 2011 NHL Draft, Lowe is the eighth-longest tenured player in Checkers history. After his entry-level deal expired following last season, the blue liner was qualified and re-signed by Carolina. Now on a one-year contract for the first time in his career, things are a bit different for Lowe, but his goal remains unchanged.

“It’s a little bit of a different feeling, but I’m playing the same way,” said Lowe. “When I’m on the ice it’s not on my mind at all. As far as I’m concerned I’m in the same place I was and I’m trying to get to the same place I was. The work will continue to be there and it’s going to get harder and harder, but I’m going to continue to work harder and harder until I get what I want, which is to play in the NHL regularly. It’s not changing my mindset.”

Similar to his head coach's outlook, Lowe is prepared to help lead the Checkers to a second-half surge.

“We’re a young team and we got off to a quick start and got a little bit complacent,” said Lowe. “We had a bit of a tough stretch there but as of late, if you look at the last 10 games, our record speaks for how we’ve been playing and the work we’ve put in.

“I just want to continue to play my solid, competitive, hardworking style of hockey and be there for my teammates with my whole 100 percent every shift. Do whatever I can to help the team win, that’s what I can do.”