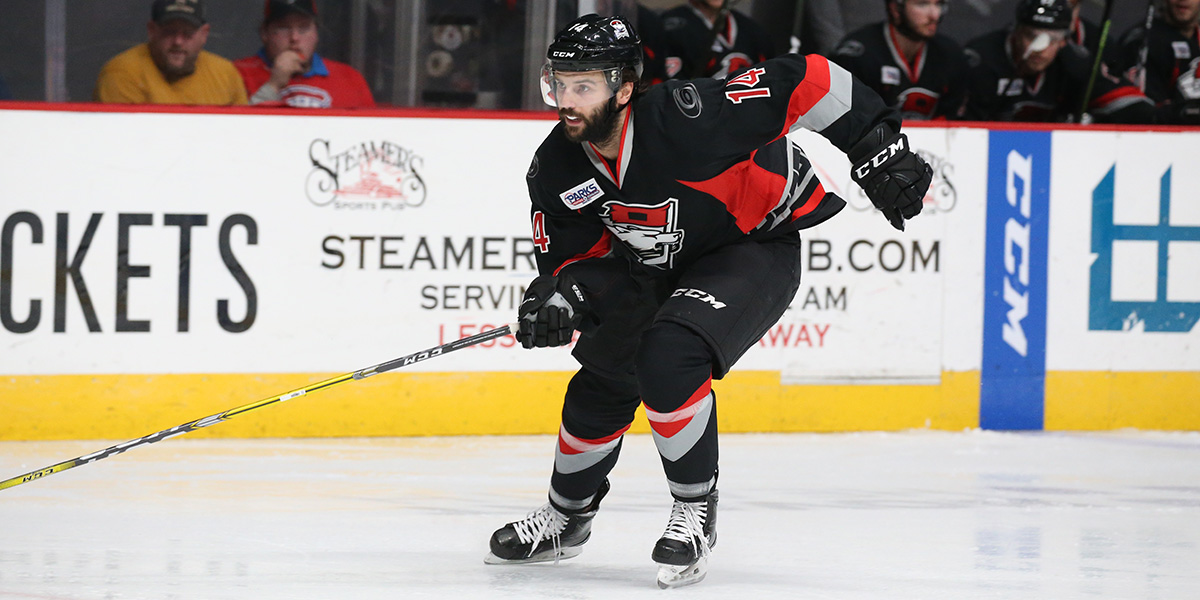 The nature of an AHL roster is one of constant change.

Injuries and recalls can leave a trail of holes in an AHL team’s roster, and the typical way that is combated is by calling up players from an ECHL affiliate or signing players to professional tryouts. Whatever the method used is, those additions are more often than not quick fixes, with the players filling in the gaps for a short period of time before the shuffle begins again.

That hasn’t been the case with Charlotte and two of its most recent contributors.

Levko Koper inked a two-way AHL contract with the Checkers over the summer after completing his Canadian collegiate career at the University of Alberta. The 26-year-old rookie competed in Charlotte’s training camp before being assigned to start the season in the ECHL with the Florida Everblades. Koper enjoyed a strong start with Florida, picking up five goals and eight points in his first 13 games. Then, with the Checkers looking for additional forwards to fill out a roster that had lost its top two performers in Derek Ryan and Brock McGinn to the NHL, they turned to the ECHL, recalling Koper on Nov. 21. The forward picked up a helper in his Charlotte debut and hasn’t looked back since.

Koper has appeared in all but three of the Checkers’ games since he was recalled, and has played in each of the last 20. The rookie brings a lot to the table, and his strong play has now made him an everyday player.

“His number one asset is his speed,” said head coach Ulf Samuelsson. “But he also has the ability to score when he has the opportunity.”

Koper has accumulated 10 points during his 29-game stay with the Checkers, including six goals, the sixth-highest total on the team. The forward has carved himself a spot in the team’s bottom six and has thrived there, giving the Checkers a legitimate scoring threat on the fourth line.

“He doesn’t get a ton of ice time, but the amount of goals he has relative to his ice time is terrific,” said Samuelsson.

The decision to recall Koper from within as opposed to bringing in a player on a PTO is a relatively unique one – last season the only under-contract forward to be recalled from Florida was Carter Sandlak, who bounced up and down to start the season before eventually spending the majority of his time in the ECHL. But Samuelsson wanted to make sure to start his search within.

“First of all, you want to give a chance to the players in your organization,” said Samuelsson. “If they can do it, they can have it. If not, you’re going to try to look elsewhere. So it’s a combination, but you always try to look in your own house first.”

Circumstances can arise that go against that philosophy, however, like the opportunity to bring in one of the league’s most established forwards.

Fresh off a tryout stint with the Bakersfield Condors, Kris Newbury wasn’t looking for a team for very long before the Checkers offered him a PTO of their own. The 34-year-old has had a historic run in the AHL, recently becoming just the 37th player in league history to appear in 800 games, but his start with the Checkers wasn’t easy.

“It’s been tough,” said Newbury after returning to game action from an injury that caused him to miss 10 straight games in December. “In the last year and a half to two years, I’ve dealt with a lot of injuries whereas in the first 12 years of my career I didn’t really deal with much. It’s kind of the breaks of hockey but you’ve got to come back as healthy as you can and not too early where you don’t help the team out in any way. I bided my team, and then when I get in there I want to help as much as I can.”

Now healthy, Newbury, whose 571 AHL points stand as the second-most by any active player, has helped to solidify the bottom half of the Checkers’ lineup.

“He’s a smart veteran player,” said Samuelsson. “He’s good positionally and he plays with some bite in his game, so he’s added all of that to our team.”

The emergence of Koper and Newbury as everyday players is a much-needed boost for the Checkers, who will be without two other bodies this weekend. Second-year forward Sergey Tolchinsky, who has missed the last four contests due to injury, will remain sidelined for the time being.

“Tolchinsky won’t be available for the weekend, that’s pretty much all we have on him,” said Samuelsson.

Kyle Hagel, who took a shot to the face at practice last week and missed the team’s trip to Tucson, appears to be on a longer timeframe than his forward counterpart.

“He had surgery on his teeth and I’m not sure what the time frame on him is but it’ll probably be a while,” said Samuelsson.

Tolchinsky and Hagel join Brendan Woods as the injured contingent for Charlotte. Woods, who has been out since Nov. 2, has spent the last few weeks skating with the team, but has no timeline on his return.

Some other news and notes from this week:

While the young guns have been battling atop the team scoring lead and garnering a lot of the attention, a familiar face to the organization has found his groove as of late and continues to propel the offense.

After seven season in the NHL with the Carolina Hurricanes, fan favorite Patrick Dwyer signed an AHL deal with Charlotte prior to the start of the season to return from overseas and join the team.

Filling more of a grinder type of role in the NHL, Dwyer has no shortage of offensive skill to his game, especially at the AHL level. But it proved to be a tough start for the veteran, a situation not helped by a shortened training camp and a tough injury, and Dwyer collected three points through his first 24 games with Charlotte.

“He had a bit of an unusual, late start since he didn’t have training camp,” said Samuelsson. “He was a little bit behind and that put him not in a great spot to start off with.”

That’s not to say that the 33-year-old wasn’t a contributor early on this season, as he definitely made his presence felt on the ice. But once that offensive switch flipped, the veteran took his game to a new level.

“He was committed and he got himself in game shape and started producing,” said Samuelsson. “We always knew he was a good player, it was just a matter of him getting going.”

Dwyer immediately busted out of those first 24 games with four points in three nights, kicking off a tear that has seen him rack up 10 points in the last 15 games and become one of Charlotte’s most deadly weapons.

“He’s a complete player,” said Samuelsson. “He helps out in all situations – power play, PK and five-on-five. He’s playing on a very good line now. He’s not young but he has a lot of speed and that’s one of his biggest assets.”

After a seemingly never-ending rotation through their crease, the Checkers appear to have solidified their tandem in net for the time being.

With rookie Alex Nedeljkovic cleared to return from injury and Eddie Lack back in the number-two spot with Carolina, the Checkers have assigned Daniel Altshuller to the ECHL’s Florida Everblades, leaving Charlotte with Nedeljkovic and Michael Leighton.

“These are the two guys,” said Samuelsson. “We’re excited to have these two guys.”

Leighton’s erratic schedule, one that has seen him spend the last several months in the NHL backing up Cam Ward while occasionally traveling to pick up starts with Charlotte, appears to be settling down for now. The veteran netminder, who recently moved into sixth place on the AHL’s all-time wins list, recently snapped a four-game winless streak with the Checkers but is a proven commodity down the stretch for Charlotte as it prepare its push for the postseason.

Nedeljkovic, on the other hand, has won each of his last three appearances in goal for Charlotte, a run that the coaches hope represents the rookie turning a corner.

“Ned had a slow start, but his last three outings have been very positive for him,” said Samuelsson.