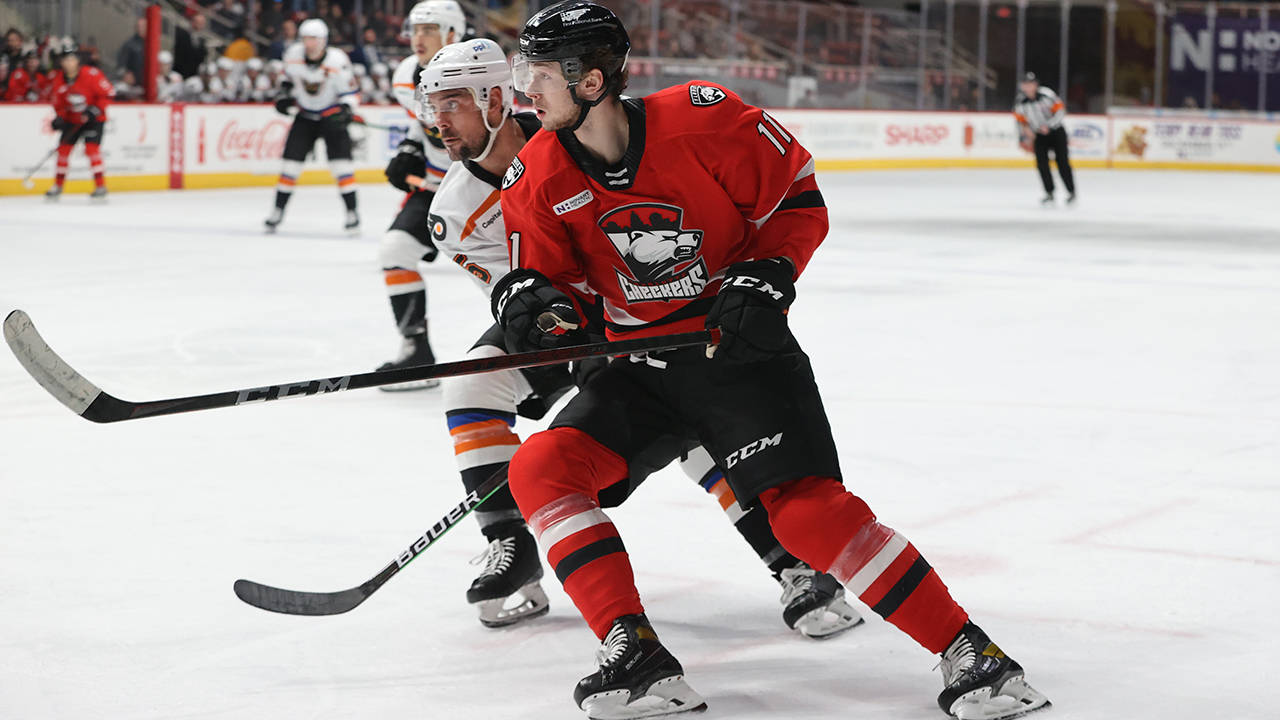 The pandemic-shortened season gave Cole Schwindt a rare glimpse of the AHL game as a teenager.

Now, at 20, the young forward is finding his stride at this next level.

“The American League is no joke,” said Schwindt. “Getting to see it a year early is going to make all the difference for me. Coming into this year I feel a lot more comfortable.”

While this is technically his second pro season, Schwindt only appeared in 10 games for the Syracuse Crunch last season, picking up a goal and an assist along the way. Picking back up in Charlotte, he went through a bit of a feeling out process early on, going scoreless through the first five games of the season.

Things clicked for Schwindt in game six, however.

The Ontario native lit the lamp and added an assist for his first pro multi-point game - doubling his career point total in the process - and has recorded a point in every game since, sitting on five points through nine games.

“Obviously you don’t pay too much attention to the points,” said Schwindt. “But getting on the scoresheet is nice. I want to keep going from there.”

While Schwindt downplays his recent hot streak, the coaching staff sees it as a product of the other parts of his game coming together.

“He’s worked hard and paid attention,” said Head Coach Geordie Kinnear. “He’s playing the right way, and when you play the right way you get rewarded.”

Among the bevy of shuffling up front, Schwindt appears to have carved out a spot in the Checkers lineup. While possessing plenty of skill in his game, the 6-foot-2 forward has been consistently playing alongside Carsen Twarynski in what has become a solid, gritty line for Charlotte’s arsenal.

“He’s come with a workman-like attitude and was rewarded with some goals, like that big goal on the penalty kill,” said Kinnear. “That’s going to kind of be his identity going forward. I’ve liked that line [with Twarynski and Henry Bowlby].”

Having a player with Schwindt’s skillset playing where he is in the lineup has helped the Checkers kickstart their depth scoring, something that the team was looking for after a start to the season propelled largely by the top line of Max McCormick, Logan Hutsko and Alex True.

“One of the biggest things that we talk about is having four forward lines and six D going at all times,” said Schwindt. “Playing as four lines with everyone moving, that’s the best way to win games. Getting your fourth line going and getting some goals is always good.”

Zac Dalpe has been a proven scorer at this level for quite some time now, consistently registering as one of the league’s premier offensive threats.

The production hadn’t quite been there to start the season, however - he had recorded one goal through his first five games. Dalpe wasn’t alone, as the Checkers searched for a way to kickstart some scoring throughout the lineup.

The Checkers captain remained positive, though, pointing to something outside of the scoresheet.

“It’s a thing I call point energy,” said Dalpe last week. “Games are obviously won or lost by what team scores more goals, but you can still find that point energy within yourself and within your game.”

The veteran must have been on to something, because the Checkers came out firing over this past weekend and saw nine different skaters light the lamp on Charlotte’s 10 total goals.

That included Dalpe, who found his stride with two goals in Saturday’s win over Lehigh Valley.

“I’ve been snakebitten a bit to start the year,” said Dalpe after the game. “I don’t want to be the old wily vet, but something I’ve learned over the years is that it’s a long season. Geordie talks about having skin in the game, and I feel like I have. If you work hard, the hockey Gods will reward you.”

Dalpe has a belief that that point energy - combined with the hard work being put in - will transition over to the scoresheet soon for his teammates as well.

“You look at Denisenko, he’s been snakebit a little bit, but he’s found that point energy,” said Dalpe last week of his fellow forward, who recorded an assist in both games over the weekend. “Hell, he was here last night at 5 o’clock shooting. I wasn’t aware of that and I love hearing stuff like that.”

Charlotte’s power play has certainly had its fair share of ups and downs this season - the unit started the year with goals in each of the first two contests before going 1-for-18 over the next five.

Heading into the series against the Phantoms, the Checkers were simply looking for a way to get a positive out of their man advantages.

“If it’s a power play, it’s about creating momentum,” said Kinnear. “It’s not always just about scoring goals. That outlook sparked something in the Checkers, who came out with a 2-for-3 showing on Saturday night en route to a blowout victory.

“I thought the power play did a great job and scored some big goals,” said Kinnear after the win. “They took the five-minute major, and you want to make sure you hold them accountable.”

The following night wasn’t quite as fruitful, with the Checkers going 1-for-4 on the man advantage and ultimately losing 5-3. But Charlotte’s conversion came at an opportune time and clearly sparked the team to a near comeback, with Connor Carrick banging home a shot from the slot to give the home team a shot in the arm.

“The power play is going to get hot and cold over the course of the year,” said Carrick after the contest. “It’s not always a reflection of the players. We have a lot of good players and a plan, but the puck just wasn’t going in for us. We needed something to break through, so that was an emotional point for us.”

While things were far from perfect, the weekend series further instilled the mindset that Kinnear and the coaching staff have been preaching since day one.

“Geordie says that the power play dictates how we play on five-on-five,” said Dalpe. “The biggest thing for me is if you’re not putting pucks in the net you better generate some momentum for your team.”