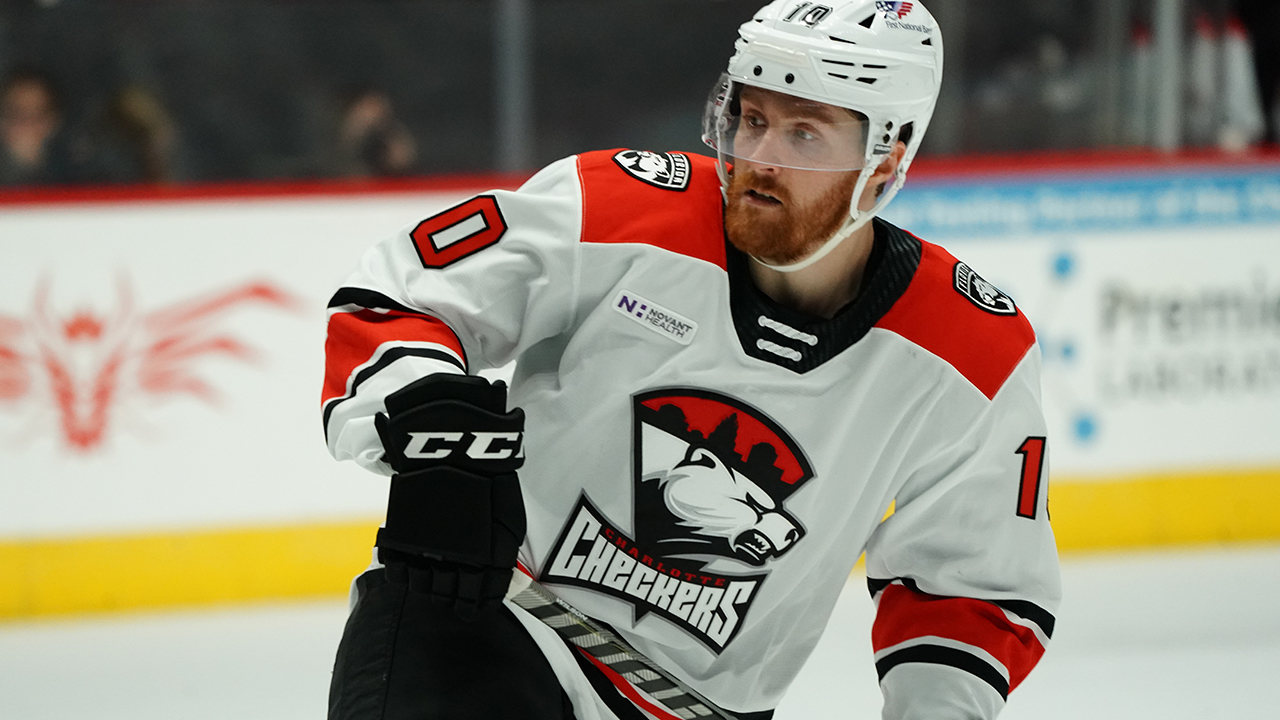 Scott Wilson has spent plenty of time in professional hockey. Whether it’s in the NHL or AHL, the 29-year old has made an impact on many different teams since being drafted by the Pittsburgh Penguins in 2011.

This season, Wilson has found himself in a new role after signing an AHL contract with Charlotte before the season began. While working his way back up to the top level, Wilson has helped Charlotte win games and the Checkers’ younger core in the process.

“[I’m] trying to give the young guys, especially, every lesson I can,” Wilson said. “Especially lessons I learned when I was their age from older guys.”

In 16 games, Wilson has six points, with four of those being goals and the other two coming off assists. That brings his career totals in the AHL to 59 goals and 55 assists in 168 games.

Wilson thinks he can still reach another level this season along with the rest of the team.

“I think I’ve been pretty good, I think I need to get to another level,” Wison said of his personal performance. “The team has been showing flashes of being really good. It’s been up and down with wins, [it’s] about correcting some of the little details to get on a roll. If you can get on a few rolls during the year you will put yourself in a good position at the end of the year for the playoffs.”

Even though Wilson has contributed in points for the Checkers, it's his wealth of experience that makes him even more of a valuable asset. He has played with the Pittsburgh Penguins, Buffalo Sabres and Detroit Red Wings.

With Pittsburgh, Wilson was a part of their 2016-17 Stanley Cup Championship season and scored three goals and three assists throughout the playoffs. He has 20 regular season goals and 31 assists in 193 career NHL games.

One player that Wilson has played quality minutes with throughout the first part of the season is rookie Luke Henman, who signed an entry-level contract with the Seattle Kraken in May.

Wilson and Henman spent time together at Seattle’s training camp before the season, where the two formed a friendship.

“It’s really awesome to have Willy here,” Henman said. “He’s a great influence on all the young guys. He’s a [Stanley] Cup champ so he knows what it takes to make it at that level.”

According to Henman, Wilson has told him how long the season can be and that bumps in the road are a part of being at the professional level. The leadership from Wilson has come in handy, but Wilson’s play on the ice is what makes him the player he is.

“Seeing how he carries himself, his work ethic and his attention to detail really helps,” Henman said. “If you watch him play, he’s what I call a swiss army knife. He can play on the power play, he can play on a shutdown play, on a PK and just has a lot of skill.”

Not only has Wilson’s veteran leadership been a help to the rookie, but it has helped out veteran coach Geordie Kinnear, who became the Checkers’ head coach in August of 2020.

At the beginning of the year, the two talked about Wilson’s goals and he made it clear he wants to get back to a high level of play and go back to the NHL.

“Willy’s been great for us,” Kinnear said. “He’s done a good job to date of trying to get to that highest level. He knows there’s more, I know there’s more. We’re going to get it out of him at some point.”

Wilson’s sights are set on playing in the NHL, but he has enjoyed his time in the Queen City, as the mix of cold and warm weather has been his favorite part thus far.

But before he gets back to the next level, Wilson plans to make the most of his time with Charlotte in any way possible.

“[I] have to take one step at a time. I’m really not looking behind me or in front of me,” Wilson said. “I haven’t played a lot of games the last few years just with injuries. Just stringing a bunch of games together will help things fall in place.”