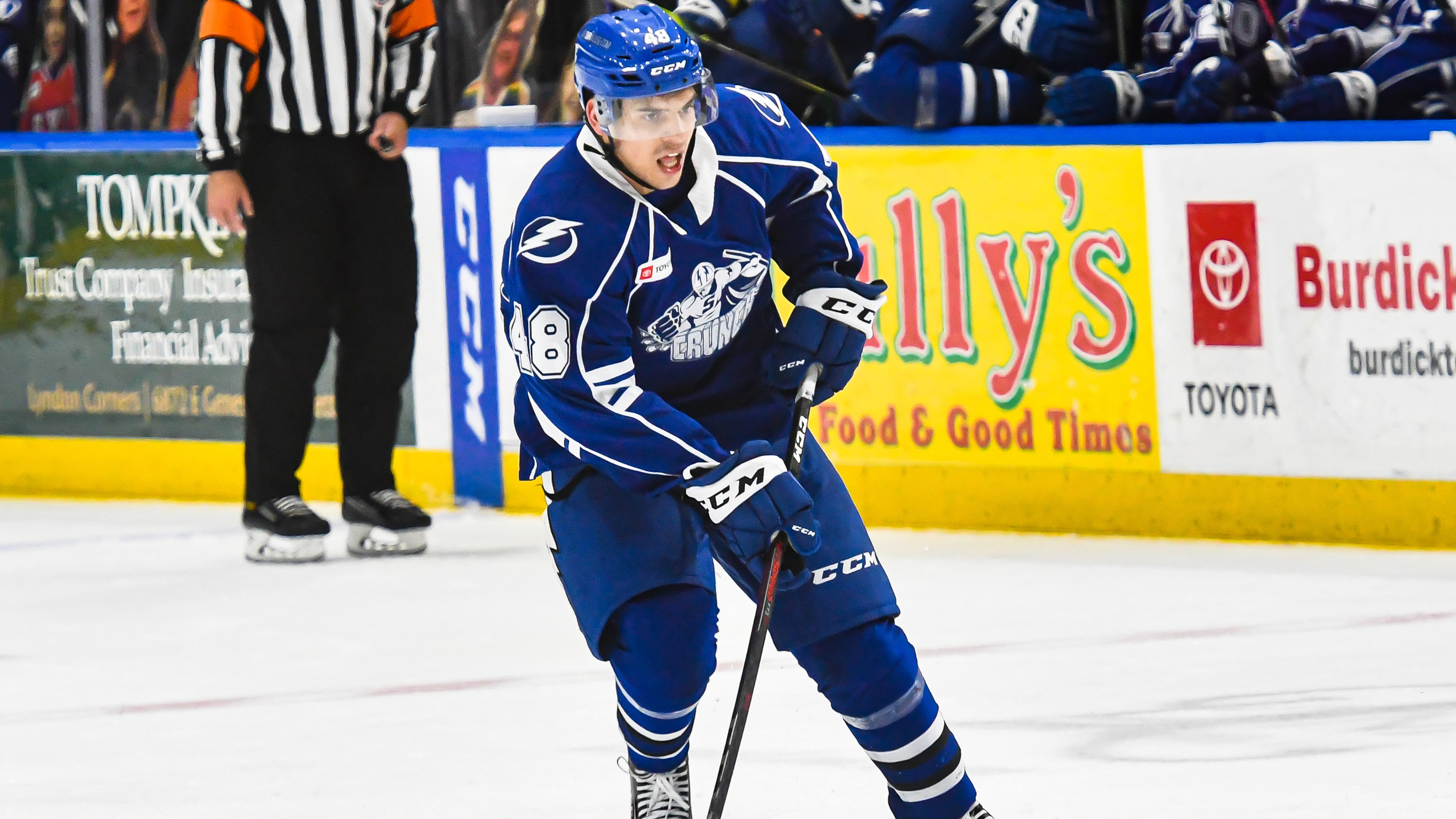 Bowlby, 24, is heading into his second pro season after posting 14 points (8g, 6a) in 23 for Syracuse last season and tying fourth on the Crunch in goals. An undrafted free agent signing by Florida, Bowlby spent three seasons at Harvard prior to turning pro.

Denisenko, 21, is beginning his second pro campaign in North America, logging nine points (5g, 4a) in 15 games with Syracuse and four points (0g, 4a) in seven games with Florida a season ago. The 15th overall pick in 2018, Denisenko spent two season in the KHL with Lokomotiv prior to making the jump overseas, recording 18 points (10g, 8a) in 63 games.

Hutsko, 22, is set to begin his pro career after four years at Boston College. The Florida native, who was a third-round selection by Florida in 2018, notched 101 points (41g, 60a) in 114 games over his collegiate career, helping lead BC to three Hockey East regular season championships and being named the conference Rookie of the Year in 2017-18.

Schwindt, 20, logged 10 games for Syracuse last season and posted two points (1g, 1a) in his first pro stint. Prior to turning pro Schwindt - who was taken in the third-round by Florida in 2019 - starred for the OHL’s Mississauga Steelheads, logging 138 points (55g, 83) in 191 games over three seasons.

Gildon, 22, posted 19 points (2g, 17a) in 32 games for Bakersfield last season, ranking third among rookie defensemen and tying for seventh among all league blue liners - a showing that earned him a spot on the AHL All-Rookie Team. The third-round pick spent three seasons at the University of New Hampshire prior to turning pro, recording 73 points (21g, 52a) in 101 games while leading the Wildcats’ blue line in scoring all three years.

UPDATE: Zac Dalpe and Noah Juulsen cleared on Saturday, while Samuel Montembeault was claimed by Montreal.

Additionally, the Panthers placed forward Zac Dalpe, defenseman Noah Juulsen and goalie Samuel Montembeault on waivers on Friday for the purpose of assignment to Charlotte.

Florida also released forward Karch Bachman and goalie Evan Fitzpatrick from their training camp invites. Both players are on AHL contracts with the Checkers and will now report to Charlotte.

Also coming from Florida's training camp is Justin Nachbaur, who has signed an AHL contract with the Checkers.

The 21-year-old winger has spent the last few weeks as an invite at both Florida’s development and training camp. Nachbaur is coming off a four-year WHL career in which he posted 89 points (45g, 44a) and 228 penalty minutes over 216 games with the Prince Albert Raiders.

On the other side of the dual-affiliation, the Seattle Kraken have released forward Ryan Lohin from his training camp invite. The 25-year-old has now signed an AHL contract with the Checkers and will report to Charlotte.

A seventh-round pick by Tampa Bay in 2016, Lohin has two full pro seasons on his resume, totaling 15 points (7g, 8a) in 28 AHL games with Syracuse and 12 points (7g, 5a) in 21 ECHL games with Orlando. Last season he tied for fourth on the Crunch in scoring and ranked sixth in goals.