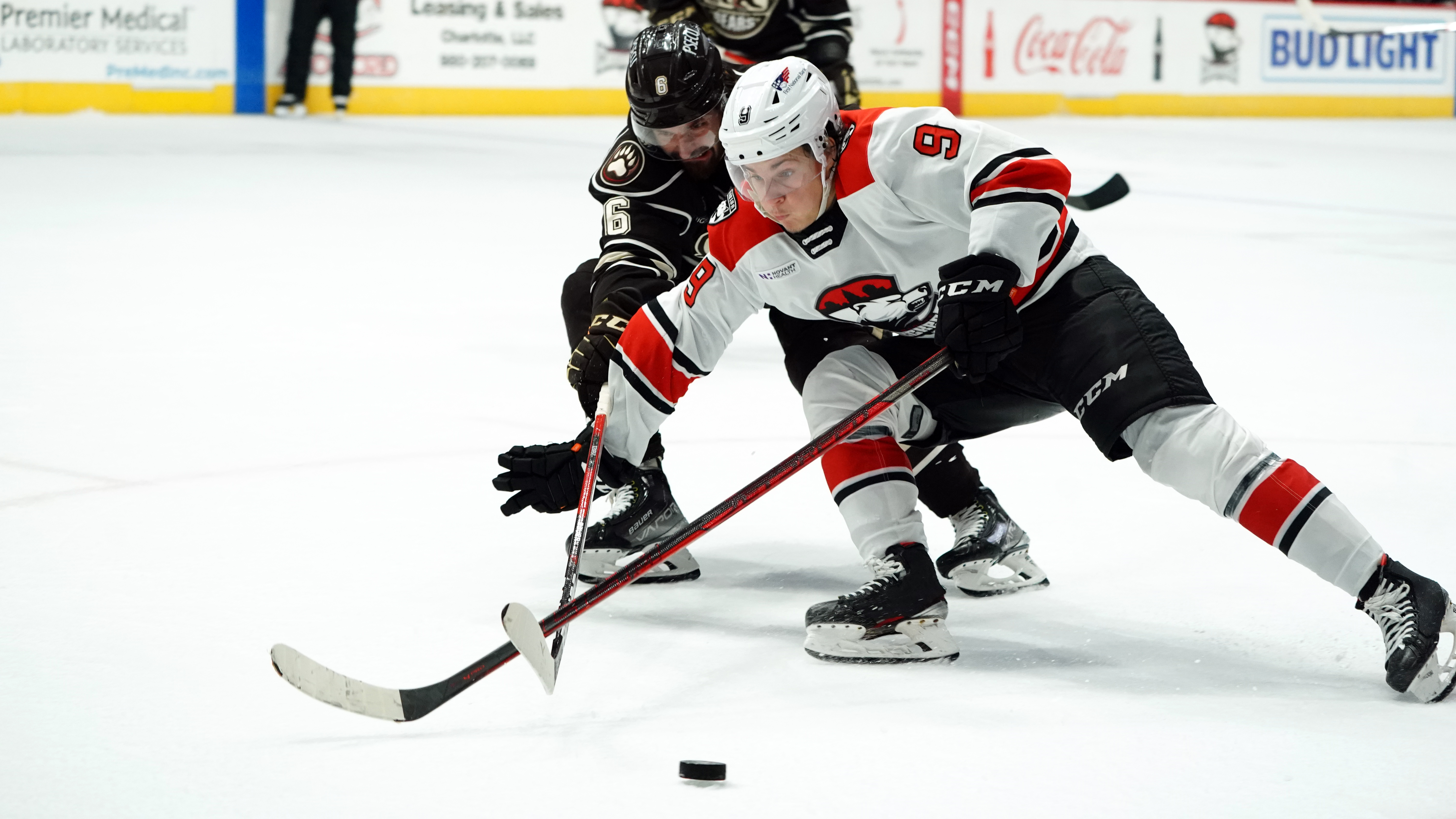 The rematch between Charlotte and Hershey was a tight, low-scoring affair that saw the Checkers earn a point in the standings but ultimately fall thanks to a late overtime winner by the Bears.

The visitors drew things to a 1-1 tie with a late tally in the third period, sending the Checkers to overtime for the first time this season. The extra frame was a thrilling one, featuring over four-and-a-half minutes of near constant chances for each side. The game seemed destined for a shootout until a quick shot from Hershey’s Lucas Johansen snuck through to clinch the win for the Bears with just 23 seconds left on the clock. 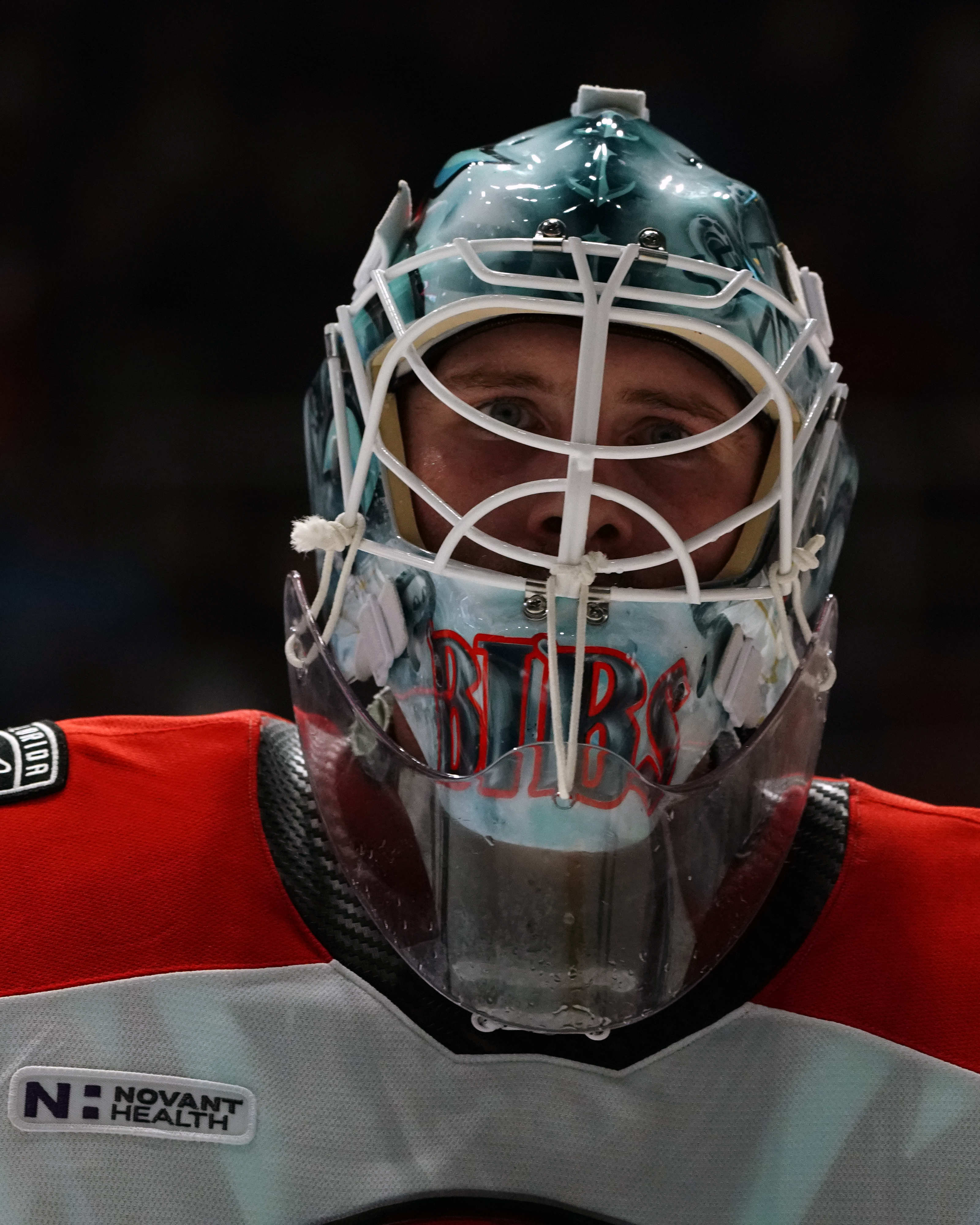 SCORE SHEET PHOTO GALLERY
Logan Hutsko’s red-hot start to his rookie year rolled on tonight, as the young forward crashed the net and potted his first pro goal early on in the middle frame to put Charlotte on the board. That would be the lone offensive breakthrough for the home side though, as they outshout the Bears 28-26 but couldn’t solve netminder Zach Fucale beyond that.

In his first start of the season, Antoine Bibeau turned in a stellar performance against a formative Hershey offense, making 24 saves to help earn the Checkers a point in the standings.

Coach Geordie Kinnear on the effort
I thought we played a really good hockey game. I thought we limited their chances. They’re obviously a high-end team, but the effort was there and I thought it was the most organized game we’ve played, and obviously we got good goaltending.

Kinnear on playing with a 1-0 lead
It’ll be a little bit of a learning curve for us, but moving forward we want to get that killer instinct. That next goal is critical for us because you want to go up two and keep your foot on the gas, but I thought we handled it fine. We had that power play where you want to have that killer instinct and then they come back right after, end up getting a bounce and it ends up going in the back of the net. Overall I was very proud of the effort.

Kinnear on goaltender Antoine Bibeau
We had a lot of travel so he ended up going back to Allen and then we recalled him right away, so he spent two days in the car and hadn’t practiced a lot. He had a couple of good practices here with Leo Luongo and the “dig in” was pretty impressive.

Kinnear on Logan Hutsko’s goal
I like those types of goals. Second and third (chances) in front of the net in the blue paint. He loves traffic and he’s very good in there, so it was definitely a reward for his work.

Logan Hutsko on playing Hershey
We’ve got to know them pretty well here early in the season. We were just trying to get pucks deep and play in the offensive zone, but obviously came up short.

Hutsko on his first professional goal
I missed a couple of chances here early in the first couple of games, so finally getting one in tonight felt really good. It definitely helped to get it out of the way.

Hutsko on playing at home
The crowd was great tonight and it was really fun playing in front of them. I wish we could have gotten the win, but we’ll come back next weekend and be ready go to.

First of many for Logan Hutsko! pic.twitter.com/gWIB7i8whF

After dropping their opener against Hershey, the Checkers have points in each of their last three games (2-0-1) … Hutsko now has five points (1g, 5a) in his first four AHL games … He and Alexander True are the only Checkers to record at least one point in each game … At the game’s conclusion, True led the AHL in scoring with seven points (4g, 3a) in seven games and also had a league-best, plus-8 rating … Hutsko was tied for fourth among rookie scorers … Forwards Karch Bachman and Zac Dalpe missed the game due to injury … Forward Henry Bowlby defenseman Frank Hora were healthy extras.

The Checkers head back out on the road for a three-in-three next weekend, beginning with a Friday matchup in Providence.