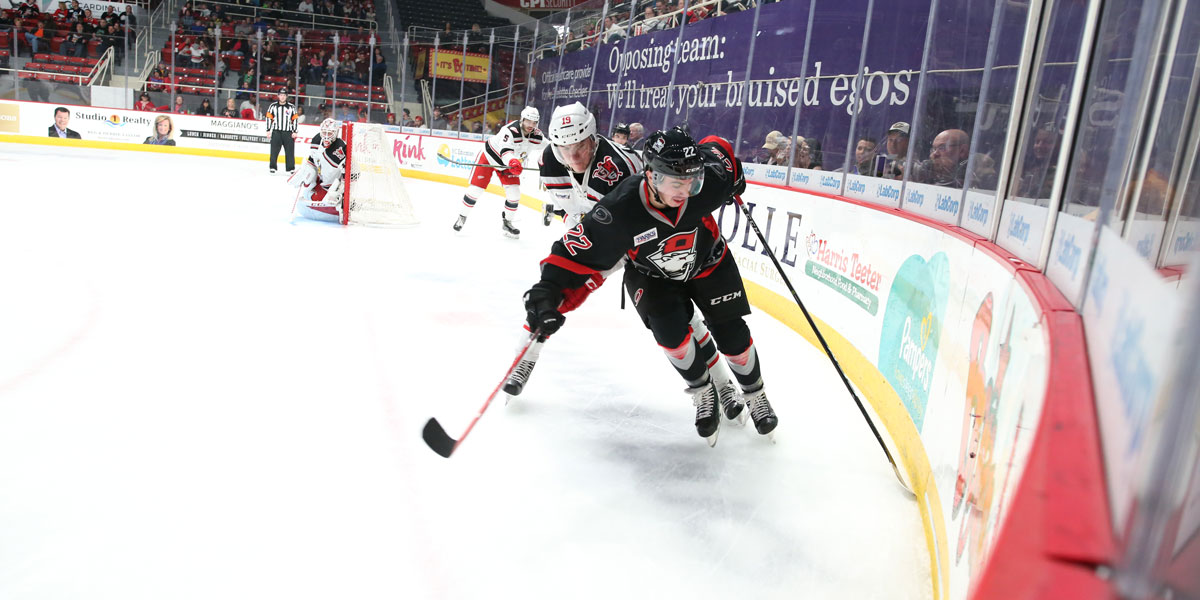 The Checkers were able to rebound with a better effort in their rematch with Grand Rapids, but they couldn’t muster up quite enough offense and fell 3-1.

Charlotte took the ice energized, mounting substantial pressure in the Grand Rapids zone from the opening faceoff, but they couldn’t connect, and it was the Griffins who ended up on the board first with a tic-tac-toe play on a late man advantage.

Levko Koper erased that lead quickly in the second, however, streaking toward the goal and roofing a shot over the shoulder of Griffins netminder Eddie Pasquale. But that tie score wouldn’t escape the frame, as Kyle Criscuolo beat Alex Nedeljkovic with a wrister from the slot later on in the period.

The Checkers would continue to press for the equalizer through the final 20 minutes of regulation, but found no results, and an empty netter by the Griffins clinched the 3-1 final and Charlotte’s second loss in a row. Score SheetPhoto Gallery
The home team’s effort was much improved from last night’s blowout defeat, but they were unable to turn that into two points in the standings.

“We played a tighter game and we played better defensively,” said head coach Ulf Samuelsson. “We had enough chances to get even in the game or take the lead but we weren’t very good on capitalizing on our rush chances. We never really created that much offensively.”

Despite all the sustained pressure the Checkers were creating throughout the night, they failed to record over two goals for the 18th time this season, falling to 1-15-2 in those situations.

“It’s tough not to get down on yourself and think that nothing’s going for us,” said Koper. “You’ve just got to stick to the game plan and eventually it’s going to come, we’ll break through and we’ll get a win.”

Koper was the lone Checker to light the lamp today and did so as part of a fourth line that created a spark and were oftentimes the strongest group for Charlotte.

“In this league you need four lines that can play – it’s tough if you’re relying on three lines all the time because guys get tired and stuff,” said the rookie forward. “Anything the fourth line can do to give the first couple of lines a break and maybe get a point here or there is going to help us a lot.”

Still, the Checkers will need more players to step up going forward in order to help break them from their offensive funk.

“It’s just an indication on how hard it is to make that last play or take that shot to get it through or get it in an area where it can go in,” said Samuelsson. “It just shows you how hard it is to be a producer at this level. We’re working so hard but right now we don’t get that extra energy from scoring that we had been in the past. It’s frustrating at times.”

The small silver lining for the Checkers was their defensive play, keeping the Griffins’ high-flying attack in check for most of the contest.

“I think we were better in the neutral zone,” said Samuelsson. “They didn’t come with a ton of speed at our D and kept everything a little more in the outside. Defensively it was a step forward for sure.”

Part of that was the play of Alex Nedeljkovic, who got the start after appearing last night in relief. The rookie turned aside 23 of the 25 shots he was faced with and was able to keep the Checkers within striking distance all the way till the end.

“He made some saves at the right time,” said Samuelsson. “He bounced back with a solid game.”

With two tough losses behind them, the Checkers face a quick turnaround that sees them hit the road for a run of games before the holiday break.

Given the team’s struggles away from home, building off today’s effort will be a big part of turning things around on the road.

The Checkers went 2-2-0 on their four-game home stand and also fell to 2-2-0 in their series against the Griffins this season … The Checkers scored just two total goals in this weekend’s games against the Griffins. They are now 1-15-2 when scoring fewer than three goals and a perfect 10-0-0 when scoring three or more … Koper’s goal gave him six points (4g, 2a) in his first 11 AHL games … Karlsson’s sixth assist of the season equaled his total from all of last season … Forwards Andrew Miller, Kris Newbury and Brendan Woods and defenseman Trevor Carrick missed the game due to injury … Forward Mitchell Heard and defenseman Kevin Raine were healthy extras.