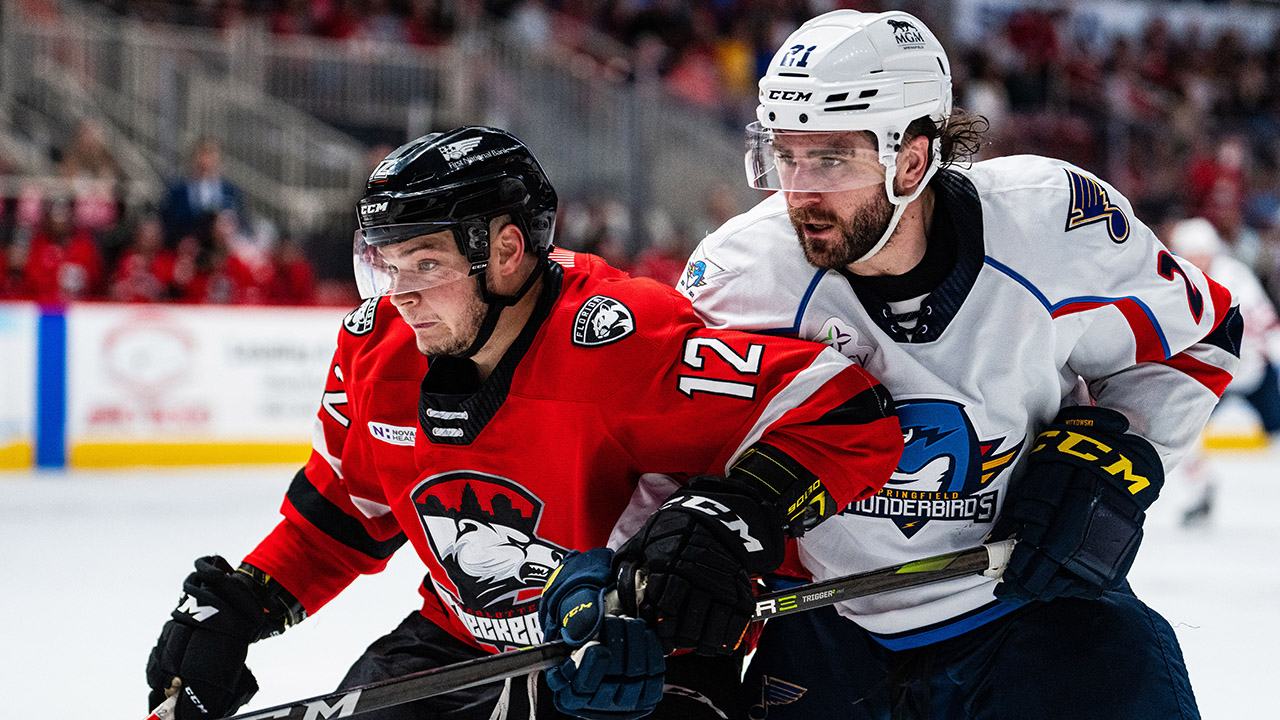 The Checkers playoff run came to an end Saturday night, as they dropped Game 3 of the Atlantic Division Finals to the Springfield Thunderbirds 5-1.

Facing a do-or-die scenario in Game 3, the Checkers once again ran into the red-hot play of Springfield netminder Joel Hofer. The home side pumped plenty of pucks on net, but Hofer was up to the task on the majority of them - finishing the night with 34 saves to notch his third consecutive victory of the series.

The Thunderbirds opened the scoring midway through the first period, then doubled that lead with a power-play strike early on in the second.

The Checkers entered the final frame with a two-goal deficit to overcome, but they couldn’t make up any ground before the Thunderbirds were able to further extend their lead. Springfield found the back of the net less than two minutes into the third and quickly tacked on another minutes later to blow the game open.

With an extra attacker, the Checkers were able to chip one home in the back half of the third as Max McCormick notched his fourth of the postseason, but it wasn’t enough to spark the miraculous comeback Charlotte was looking for. Springfield found the empty net in the final minute to ice the game and the series, beating the Checkers three games to zero and advancing to the Eastern Conference Finals.

SCORE SHEET PHOTO GALLERY
Coach Geordie Kinnear on the game
I give Springfield a lot of credit tonight. We didn’t have a lot of space to make plays. I thought early we certainly had some chances and overall the effort was there, we just didn’t make enough plays to be able to go on.

Kinnear on the difference between the teams
I think if you look at the groups, I think (Springfield) is an experienced group. They have guys that have played in the National Hockey League and have played in the American League a long time. They have some skill on the other side, and I think you could see the experience as the series wore on a little bit. It’s a real good lesson for everybody that as you move forward it gets harder and harder to win, and we obviously found that out. I think the game that really stung was Game 2.

Kinnear on penalties in the playoffs
To be honest I found that in the playoff it was hard to get into a rhythm with penalties because it was called differently every single game, and that’s hard as an athlete to adapt to. We talked throughout the year about how much discipline it takes to be able to win at the end because only one team wins at the end. You need that discipline, togetherness, work ethic, grit and all that stuff. It’s a good lesson for everyone and a good lesson for me. It just creates more hunger moving forward. This was a great year but we want more.

Kinnear on his feelings about the season
I’m proud. Honestly, I’m so proud. We were kind of like an expansion team with two different organizations and guys that I didn’t know, and I didn’t know Dan Bylsma at all. We had no exhibition games. The first game in Hershey we didn’t know anything about our group at all, and we just kept building over time. You look at the guys that stepped in, all the adversity that we went through, all the goalies we went through – they had a special bond, this group. I couldn’t be more proud of our group. They made it a special year for me and one I’ll always remember and be proud of.

Zac Dalpe on the difference in the game
I don’t know. I wish I knew. It seemed like this series came unhinged pretty quick.

Dalpe on the matchup with Springfield
They obviously played well tonight and played well at home to start. I thought Game 2 could have went either way. You get home ice but you’ve got to start on the road, which is odd. There’s a lot of factors that go into trying to win and our losing in the end.

Dalpe on his immediate takeaways from the season
I’m upset. In my 12 years, this is the closest team I’ve ever been on in terms of relationships with guys. In the blink of an eye, you’re never going to have the same group again. Obviously you want to win with that type of group. I’ve played a long time and I haven’t won anything, and I really want to win. I’m upset.

The only other time the Checkers suffered a sweep in the playoffs was in the 2011 Eastern Conference Final against Binghamton … Including the regular season, the Checkers beat Springfield just twice in 11 attempts … Dalpe led all Checkers skaters with 8 points in the playoffs (7g, 1a). McCormick and Alexander True also scored at a point-per-game clip with seven apiece.