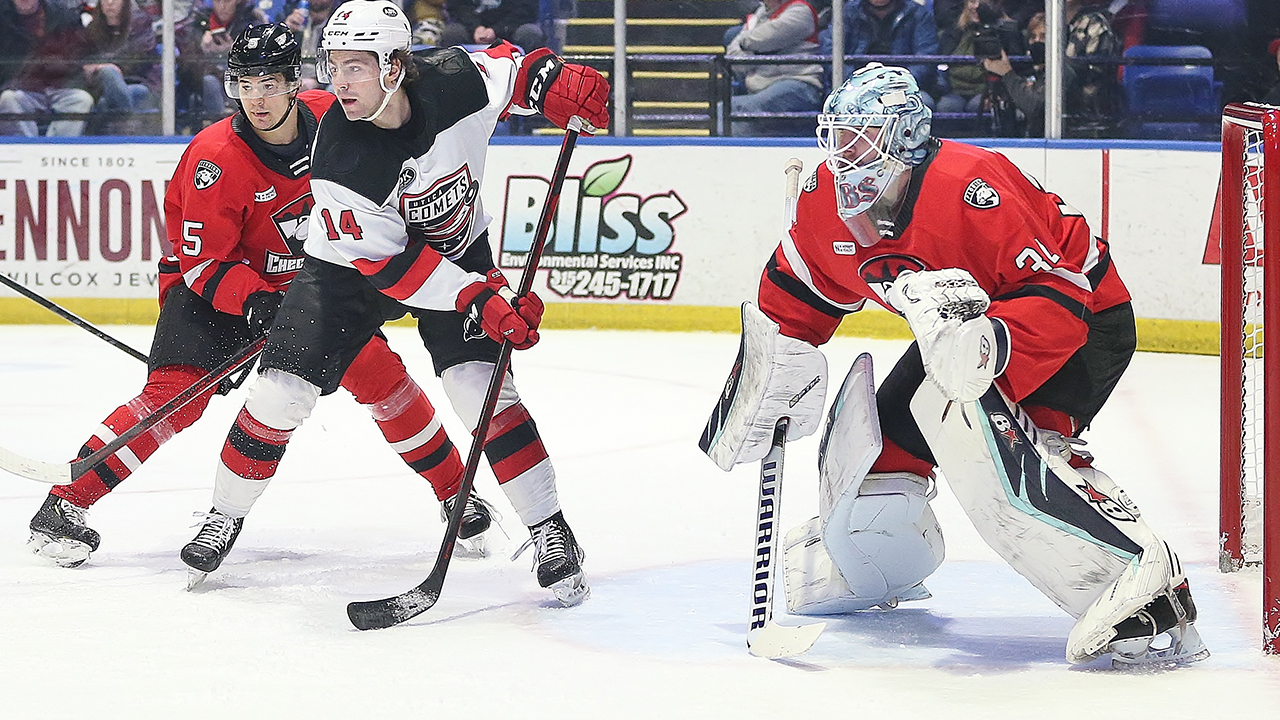 The Checkers went toe-to-toe with the AHL’s top team and - although it took longer than 60 minutes - came away with a huge victory thanks to Zac Dalpe’s overtime winner.

Nearly three-and-a-half minutes into an overtime period chock full of chances for both sides, the Checkers shut down a point-blank chance from the Comets on one end and pushed ahead for an odd-man rush going the other way. Aleksi Heponiemi found a trailing Dalpe entering the zone, and the captain ripped a shot past Utica netminder Nico Daws to claim a crucial two points in the standings for Charlotte.

You need to see how this game ended

Up until that point the contest had been a back-and-forth affair, with Chase De Leo nabbing the lead for Utica twice only to see Cole Schwindt and Kole Lind answer back for the visitors. Schwindt picked up his second of the game later in the middle frame to give Charlotte its first advantage of the night, but the Comets punched back less than a minute later to deadlock things once again into a tie that would last the remainder of regulation.

SCORE SHEET PHOTO GALLERY
The goaltenders stepped up down the stretch, with neither netminder surrendering a goal in the third period. Antoine Bibeau, making his first start for Charlotte since Dec. 10, shook off a tough start and locked things down for the Checkers, finishing the night with 24 saves to earn his third win of the season.

Tonight marked the Checkers’ first win against the AHL-leading Comets this season … The Checkers have now won three straight road games, tying their longest such streak of the season … Tonight was the Checkers’ second overtime win of the season, moving them to 2-2 in overtimes this season and 3-2 in games decided beyond regulation … Tonight was Cole Schwindt’s second multi-goal game of the season … Aleksi Heponiemi set a career high with three assists and now has back-to-back three-point games … Tonight was Antoine Bibeau’s first start for Charlotte since Dec. 10 … Zac Dalpe has four goals in his last four games and eight goals in his last 11 games … Tonight was Henry Bowlby’s third two-assist game of the season … Kole Lind has points in three straight games … Alexander True and Max McCormick saw their respective point streaks snapped … Jacob Friend made his AHL debut … Grigori Denisenko, Ryan Lohin, Max Gildon, John Ludvig, Gustav Olofsson and Christopher Gibson all missed the game due to injury … Max Zimmer, Jordan Sambrook, Brandon Fortunato and Spencer Knight were healthy extras

The Checkers’ road trip rolls on tomorrow as they visit the Syracuse Crunch for a 7 p.m. puck drop.