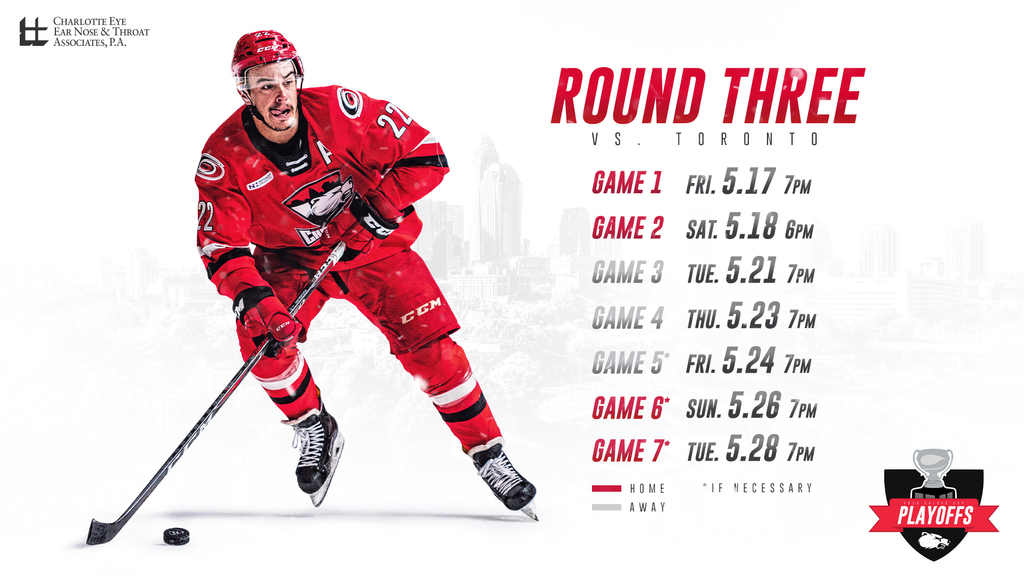 The Checkers today announced the schedule for their Eastern Conference Finals series against the Toronto Marlies.


BUY TICKETS PLAYOFF PACKAGES
The Checkers, who advanced to the third round of the Calder Cup Playoffs by completing a four-game sweep of the Hershey Bears on Wednesday, will begin the series by hosting Games 1 and 2 at Bojangles' Coliseum on Friday, May 17, and Saturday, May 18, respectively.

A full series schedule can be found below:

Individual tickets for all four scheduled home games are on sale now through Ticketmaster and the Bojangles’ Coliseum box office. All third-round home games will feature concession specials including $2 hot dogs, popcorn and domestic draught beer as well as select craft draught beer for $4. Further information, including “Pay-as-we-Play” package pricing, is available at gocheckers.com/playoffs.

This marks the first-ever playoff meeting between the Checkers and the defending champion Marlies, the North Division’s No. 3 seed which is a perfect 7-0 in the playoffs following sweeps of the Rochester Americans and Cleveland Monsters. The regular-season champion Checkers, which tonight improved to 7-1 in the postseason, went 1-1-2 against the Marlies during the regular-season series. All four games took place in a three-week span between Dec. 31 and Jan. 20.