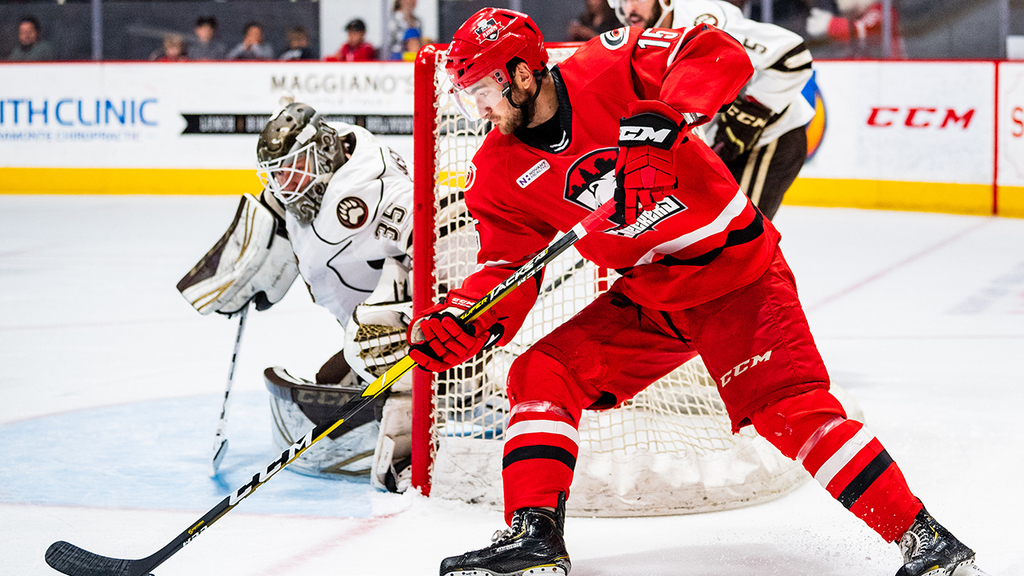 During the season, Checkers broadcaster Jason Shaya checks in each week with his 10 Thoughts - a series of observations about the team and the hockey world in general. 1. Alex Nedeljkovic is earning praise every night. In our nine years in this league and of the dozens of goalies who have put on a Charlotte sweater, no one has the poise and focus of Alex. In the second round Vitek Vanecek and Ilya Samsonov were making big saves but taking themselves out of position and overplaying shots which led to rebound chances and goals against. Nedeljkovic makes the most difficult saves look routine. He is rarely out of position and he gives this team the sense of calm it needs. However, for both the Checkers and their goaltender, the toughest challenge starts Friday night.

2. Checkers head coach Mike Vellucci went out of his way to praise assistant coach Ryan Warsofsky for the penalty killing work in both Games 3 and 4. Through two rounds, the team has killed at nearly 90%. All of that is fantastic but remember, the Marlies’ power-play is operating at a ridiculous 39%. If Charlotte takes more of the boneheaded penalties like we saw in Hershey, this series will be quick and painful. Charlotte is the second-most penalized team in the playoffs. They've been shorthanded 38 times in eight playoff games and I am well aware that many of those calls had those watching baffled. Nevertheless, when Charlotte steps into the Coca-Cola Coliseum for Games 3 and 4, I can't imagine they'll get the benefit of the doubt from officials in Toronto.

3. The Hurricanes took Jesper Sellgren 166th overall in 2018 and it took exactly one shift in his first game in North America to realize they picked a future NHL defenseman. He turned heads immediately. He has a very high ceiling and if there's an opportunity next year, he is going to make a push for an NHL roster spot. With his contract in the Swedish Hockey League, he either plays in the NHL or has to go back to Sweden for another season with Lulea.

4. If I'm the general manager for the New Jersey Devils, I get to the podium on draft day and select Kaapo Kakko with the first overall pick.

5. Longtime AHL Commissioner Dave Andrews recently announced he will be stepping down from that position after next season. In his 25 years as commissioner, Andrews grew the AHL footprint across the US and Canada while seeing record levels of attendance and stability amongst its teams. So whoever comes after him has big shoes to fill. Here's a suggestion – Senior Vice President of Hockey for Charlotte Derek Wilkinson. You need someone like Wilkinson with both a hockey and business background who understands the game from all facets. He's held numerous jobs in this business including playing in the NHL and AHL and also being a general manager and head coach. Wilkinson is responsible for much of the Checkers’ success over the past nine seasons and he is respected around the entire league. At only 44 years old Wilkinson could grow into the position and hold it for many years to come. I heard Wilky's name mentioned regarding this position a few years ago and it won't surprise me if he's considered again. He's a consummate professional and one of the smartest people I've met in this business.

6. Nic Roy's domination in the faceoff circle during the last two games of the Hershey series was a big factor in winning both games. Vellucci had Roy out for many defensive zone draws and I can't remember if he lost a single one. Charlotte was shorthanded for eight minutes in the third period in Game 3 in a 1-1 game. If it wasn't for Roy, Charlotte might not win that game. He's playing his best hockey in a long time right now and centering Tomas Jurco and Martin Necas has created another very dominating line for the team.

7. Congratulations to Bobby Sanguinetti and his beautiful wife Sarah on the birth of their second child yesterday. They welcomed their first daughter, Bree Gold Sanguinetti, on Tuesday afternoon... and since we are saying nice things about Bobby, let's note that he's tied for points amongst defensemen in the AHL playoffs. In the absence of Jake Bean, Bobby stepped into the power-play role and did what you'd expect – he facilitated offense. Nobody moves the puck around like he can and his experience on this young team is a big factor with Patrick Brown in the NHL. We should also mention Dan Renouf – not because he's also having a kid but because I think he is often overlooked. While he doesn't put up points at the same rate as other defensemen, Renouf's game is exactly what you need to win in the playoffs. He's a steady player for Charlotte and it's no surprise he's already won a Calder Cup in his career. I think it's fair to say from start to finish Renouf has been Charlotte's most consistent defenseman all season.

8. Petr Mrazek is a goalie who needs to be in a rhythm when he's playing. In these playoffs, he's been the guy every night and he's played amazing. Up until the injury, I think along with Jaccob Slaavin and Jordan Staal, he was their MVP. The injury sustained against the Islanders cost him practice and game time and the negative consequence of needing to heal is that you lose the tempo and cadence of your game. With his style of play, any deviation can lead to a period of correction, which I think we watched in Games 1 and 2 against Boston.

9. Martin Necas has four points (2G, 2A) in the last three games. If this kid can put up points consistently in the Eastern Conference Finals, I am pretty sure things will work out for the team. But, he has to do it consistently. The last two games were his best and as we enter the semifinals, the team doesn't need any passengers. He has the skill and the determination to make things happen every night.

10. In 2010-11, in their first season in the AHL, Charlotte went to the Eastern Conference Finals and lost in four games to a much better Binghamton team. Many of the players on that Charlotte team were talented and some of them we still hear from to this day. However, peppered into that team were some of the lousiest people to ever don a Charlotte sweater. Part of me wants to sit here and name names, but I'll hold off. What's just as bad is that they were terrible hockey players who never deserved a roster spot in this league. Many of them no longer play or that was their final year of professional hockey, and rightfully so. All of that is in contrast to the men who comprise this year's team. This team is a cohesive group of genuinely good kids who want to win for one another and they're about to face the toughest challenge in their careers. I believe they will meet it with the same alacrity which they've met many other obstacles this season and when the smoke clears, they will remain together moving forward.

Pregame show on Friday is at 6:45 on AHLTV, the ESPN 730 livestream and the Checkers app. Let's go!