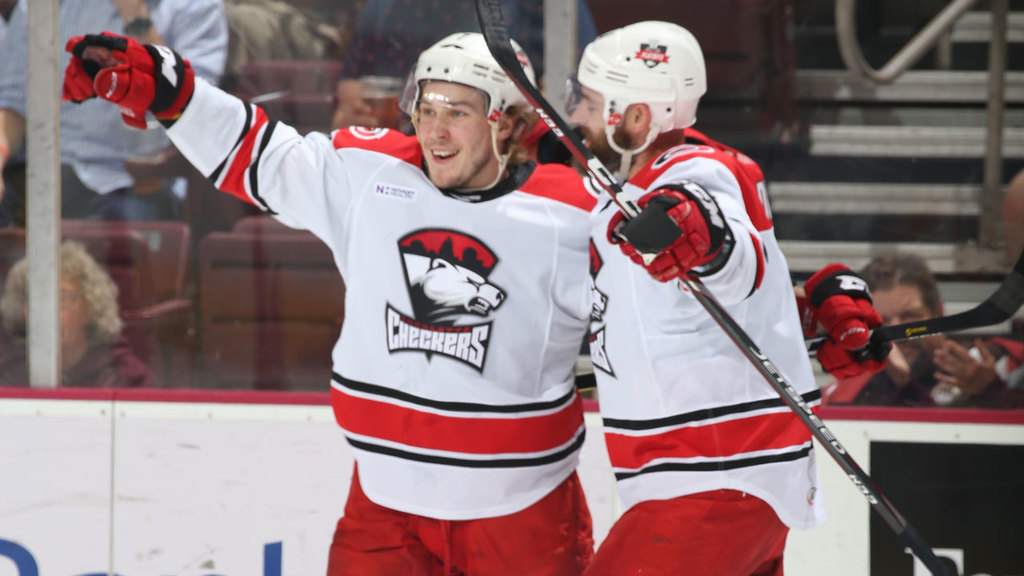 The Checkers finished off the Hershey Bears with a decisive 5-2 win Wednesday night, clinching a sweep and advancing on to the Eastern Conference Final.

The third-round series with the Toronto Marlies will begin Friday, May 17, at Bojangles' Coliseum. A full schedule and other information can be found here.

Another big game from Aleksi Saarela drove the Charlotte offense. It started with his opening tally late in the first off a slick feed from Trevor Carrick, which he followed in the second period by an incredible snipe into the far-side corner and then finally an empty-net dagger to pick up his first career playoff hat trick.

The Checkers’ power play broke out in a big way in Game 4 as well, with Julien Gauthier and Tomas Jurco capitalizing on two of the three man advantages throughout the night.

The Bears didn’t go out without a fight, recording back-to-back tallies to cut the lead in half in the final stages of the third, but the Checkers shut down any rally attempt from there. Alex Nedeljkovic finished the contest with 16 saves to collect his sixth victory of the playoffs.

SCORE SHEET PHOTO GALLERY
Coach Mike Vellucci on the game
I thought we responded pretty good. We had the game in control then got a little sloppy in the third period and made me a little nervous there at the end, but overall I thought we didn’t give them much. We played well and needed to get the win because we want to get our rest and get onto the next round. I’m really proud of the guys.

Vellucci on holding off the late push from Hershey
You want to push the pace but you also don’t want to be stupid either. If you push it a little too hard you start to give up a little too much. You know they’re going to get their chances and if we can limit them to a small amount then (Alex Nedeljkovic) is going to make the saves. He was good again.

Vellucci on Saarela’s shot
He’s had (the green light to shoot) all year long, because with a shot like that he should be shooting. I used to get mad at him because he would never hit the net. All he has to do is hit the net because it’s such a weapon. Obviously those tonight were big goals for him and for us.

Aleksi Saarela on scoring five goals in the last two games of the series
We’ve got to win eight more games and we need everybody. Part of my job is to score goals, so I’ve just got to keep going, keep working hard and earn that confidence too.

Saarela on getting the sweep
It’s huge. Toronto swept too, so it’s big for us that we don’t have to play extra games either so we can have an even series against Toronto.

This ties the farthest the Checkers have ever made it in the Calder Cup Playoffs. They also made it to the Eastern Conference Final in their inaugural AHL season in 2010-11 before losing to eventual champion Binghamton in four games … This was the Checkers’ first sweep of a best-of-seven playoff series. They swept Wilkes-Barre/Scranton in a five-game series last season … The Checkers’ sixth straight playoff win extends a franchise record. They have won 24 of 29 games since Feb. 22 … Saarela’s hat trick was the first in the team’s playoff history. It was also the team’s first of the entire season … Andrew Poturalski had an assist, giving him at least one point in all seven playoff games he’s played. He leads the league in playoff scoring with 13 points (5g, 8a) … Morgan Geekie had two assists to set a new franchise record with an eight-game point streak in the playoffs (5g, 5a) … Trevor Carrick extended his assist/point streak to four games (4a) … Bobby Sanguinetti had two assists and is now tied for the AHL lead in scoring among defensemen with seven points (1g, 6a) … Through eight playoff games, the Checkers have five players with at least four goals (Saarela, Andrew Poturalski, Geekie, Gauthier and Jurco) … Alex Nedeljkovic made 16 saves to improve to 6-1-0 with a 2.00 goals-against average and .916 save percentage in the playoffs … Forward Clark Bishop missed the game due to injury … Forwards Scott Davidson and Zack Stortini, defensemen Derek Sheppard and Eric Williams and goaltender Jeremy Helvig were healthy extras.

The Eastern Conference Final series with Toronto starts Friday, May 17, at Bojangles' Coliseum.