Checkers Shut out In Home Opener at Bojangles' Coliseum

The Checkers returned to the historic Bojangles’ Coliseum Saturday night, but couldn’t muster up any offense as they fell to the Manitoba Moose by a score of 3-0.

Charlotte had its fair share of chances, outshooting the Moose 30-21, but saw a large chunk of shots blocked by bodies in front. The ones that did make it through were snuffed out by Moose goalie Connor Hellebuyck, who continued to be a bright spot on a Manitoba team that has struggled early in the season.

“Our guys might have been trying to be too cute,” said head coach Mark Morris. “We tried to get in too tight and we didn’t create a whole lot of traffic in front of him. All the long-range shots were hitting him right in the logo. We made it easy on him there, but he still played a hell of a game.” 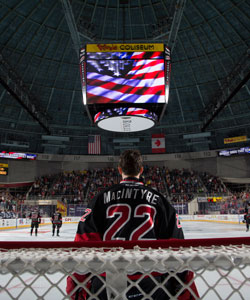 “We’ve just got to bear down on our chances,” said Zach Boychuk. “We can be a little more aggressive out there. You’ve got to go out and earn that first goal.”

While the Checkers’ offense ramped up at various times throughout the game, penalties derailed them. Though the Moose were unable to convert on any of their five power-play opportunities thanks to a strong performance by the Charlotte penalty kill, the penalties certainly disrupted the Checkers’ ability to get into a groove offensively. Mending that will be a key moving forward.

“We were our own worst enemy, and we’ve taken a lot of sticking penalties which is an area of concern and an area I’ve got to address with our team,” said Morris. “When you take sticking penalties, especially in the offensive end, there’s no room for that. That means you’re not moving your feet.”

“We can lead by example to make sure we don’t take unnecessary penalties,” said Kyle Hagel on what the leadership group on the team can do to help the team cut down on the mistakes. “Stick penalties or obstruction penalties are ones we’re going to have to avoid just so we can keep our momentum. When we’re rolling line after line out there, that helps everyone get into the flow of the game and contribute.”

The Checkers were dealt a blow when both Keegan Lowe and Brody Sutter were forced to leave the game due to injury. Sutter, who took a puck to the face, was able to return, but Lowe did not re-enter the game and is not likely to play tomorrow. Those losses forced Morris to shuffle the lineup on the fly, and the team struggled to adjust.

“Obviously our chemistry was affected a great deal when we lost Lowe and then we lost Sutter,” said Morris. “That combined with guys that are up in the big club makes for great opportunities, but we saw a couple of young mistakes out there and they came at a critical time when we were really pressing and putting a lot of pressure on their goaltender.” Facing a quick turnaround with an afternoon rematch tomorrow, Morris’ key to fixing tonight’s issues is simple.

“I think it all goes back to the fact that we didn’t capitalize on those early chances,” said Morris. “We were lax at moments and it cost us. You’ve got to play it whistle to whistle.”

Rasmus Rissanen played his 250th AHL game ... This marked the second time the Checkers were shut out this season and first at home since April 11 of last season.