Count Chad LaRose among those surprised about Chad LaRose’s return to the Hurricanes organization.

Up until recently, the veteran forward’s somewhat mysterious departure from hockey did not have an end date. It wasn’t as though he always planned to take a year off and see where it took him. Far from it.

“I wasn’t taking it as a break,” he said. “It was to stop playing hockey. I didn’t plan on coming back to play hockey ever again.”

It took all the way until this past spring, when a season he had already missed most of was winding down, for that to change. 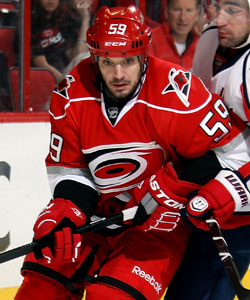 “I was fortunate to have good graces with me and in April I found my love and passion for the sport again,” he said. “I got really heavy back into it. I fell in love with it.”

Seventeen months since the 32-year-old LaRose played his last competitive hockey game – his 508th with the Hurricanes and in the NHL – he’s now taking the next steps to add towards that total. Though he’s not officially on Carolina’s training camp roster as he recovers from a quad injury suffered during offseason training that kept him off the ice for eight weeks, he’s been skating with Assistant Coach Rod Brind’Amour in between practices in an attempt to be ready for Checkers training camp on Sept. 29.

Even though he hasn’t played an AHL game since suiting up for the Lowell Lock Monsters, the Hurricanes’ affiliate at the time on Dec. 3, 2005 – a date he nearly knew by heart – he’s clearly relishing the opportunity.

“It’s going to be a great thing for me,” he said following one of his skates with Brind’Amour on Saturday morning. “I know how grateful I am to be there and I’m going to have to work my butt off down there to be a good player in the American League, I know that. I don’t expect any free rides, I don’t expect anything. I’m going to give everything I’ve got, and if they give me an opportunity I’ll be ready for it.”

LaRose, set up alongside the Hurricanes’ prospects, including many players from last season’s Checkers team, in the visiting locker room of PNC Arena, said he’d already spent some time getting to know his potential teammates in Charlotte via lunch outings and things of that nature. Even though he thought he’d left the AHL for good ever since the Hurricanes brought him up during that 2005-06 Stanley Cup season, his attitude was remarkably positive, his outlook clearly changed from one year ago.

“You get mad at yourself, you build up doubt in your own head about whether you’re even good enough to play anymore,” he said. “You just play that mental game with yourself. You know how good this organization is, how good we were as players and how good I was as a player, to be honest with you. The things we’ve accomplished here makes you want to do it again.”

As for his complete absence from hockey last season?

“I couldn’t give somebody me or 100 percent of me,” he said. “I wasn’t into the game anymore and I didn’t think it was fair to give anybody 60 or 70 percent of me. I built up a lot of anger towards the game and wanted to get away. I didn’t know if I’d ever play again, to be honest with you. Sometime you’ve got to lose what you have to realize what you had.”

Despite suffering that setback in his training, LaRose sounds as though he may be able to participate fully in Checkers camp.

“As soon as they’ll let me,” he said, when asked about a potential return date. “I’m not even in camp really here, but I’m ready for whenever. If they let me play today against Columbus (an exhibition game at PNC Arena) I would. I don’t know I’d fare, but I’m ready as soon as they’re ready to let me out there.”