With the Charlotte City Council approving proposed upgrades to Bojangles’ Coliseum the night before, all parties involved were able to make it official on Tuesday.

The Checkers are coming home.

Representatives from the Checkers, the City of Charlotte, the Charlotte Regional Visitors Authority and the Carolina Hurricanes delivered the news at a press conference at Bojangles’ Coliseum – their original home in Charlotte and, beginning next fall, its home once again for at least the next 10 seasons. The process to begin renovations, which will include a new scoreboard, ribbon board, signage and locker rooms, is already underway.

“This is going to give us increased control over every aspect of our business, including scheduling, amenities, game presentation and sponsorship inventory,” said Checkers owner Michael Kahn. “It also is going to allow us to reconnect with our history and the birthplace of hockey in Charlotte.”

In addition to helping the Checkers, the move should also have numerous public benefits as evidenced by the 10-1 city council vote to approve the necessary funding. One of those is aiding the planned revitalization of the Independence corridor. 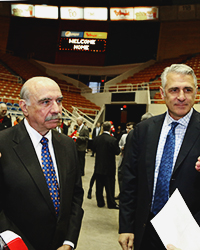 In committing funds to the arena - $12 million of which the CRVA had already proposed before the Checkers expressed interest in relocating – the city believes it is making an investment.

“This seemed to be something that was right,” said Clodfelter. “We didn’t want to lose the opportunity with the Checkers.

“The city is going to recoup this money that’s being invested off of concession revenues and parking revenues. We’ll be sharing in the additional revenue that will come from the Checkers being here. We’ll actually recover that money as the seasons progress.”

The next step is to transform the venue into something that will blend flashy modern touches with the existing nostalgia that many Charlotteans have for the building that first opened its doors in 1955.

“I think you’ll notice the seats the most because they take up the most square footage, but the scoreboard will be a fantastic, state-of-the-art scoreboard and there will also be new ribbon boards in the corners,” said CRVA CEO Tom Murray, referring to the planned upgrades. “Probably the next-most-important thing to the players is that we’re going to do a really great job creating a locker room, workout space and family room for them. We have to make sure we’re ready to go and do a first-class job for the Checkers.”

On the subject of amenities specific to players and hockey staff, representatives from the Carolina Hurricanes, including Executive Vice President and General Manager Ron Francis, were on hand to further inspect the facility and offer their support.

As part of the move, most Checkers practices will be held at Bojangles’ Coliseum, as compared to the small handful that the team has been able to hold at Time Warner Cable Arena due to the facility’s more congested schedule. Some of those practices, which could be held on the morning of a concert or other event scheduled that night, would be open to the public.

“We thought it was a great step for our organization as well,” said Francis. “It gives our guys a home where they can practice and play in the same rink and it lets us build a weight room and a place that helps our young guys develop and get ready for the next step. We’re really excited about it.”

Among all parties present, the feeling was mutual.

“As I’m looking forward to our continued partnership with the City of Charlotte, the CRVA and the Carolina Hurricanes, I believe this move can only help foster success for us all,” said Kahn.