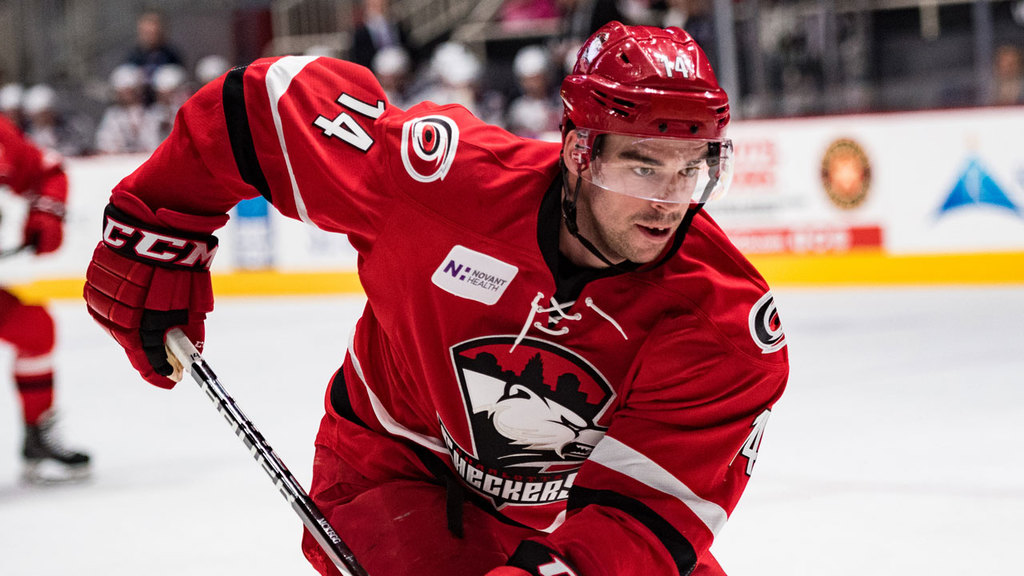 In the AHL, sometimes a change of scenery makes all the difference.

Take Greg McKegg. An established pro with solid AHL numbers and NHL experience, McKegg signed with Pittsburgh last summer and split the majority of the season between there and Wilkes-Barre/Scranton, but couldn’t seem to get much traction, notching 12 points in 28 games with the AHL Penguins. In Charlotte, Carolina’s offseason acquisition Josh Jooris had found himself the odd-man-out up top and was sent to the AHL.

Each holding onto a player in need of a shake up, the Hurricanes and Penguins agreed to a swap of the two forwards. Jooris would go on to record a goal in six games with Wilkes-Barre/Scranton mixed in with nine scoreless NHL games. McKegg, on the other hand, would catch fire and finish the season as one of the AHL’s best.

“I started out in Wilkes but getting sent here was awesome,” said McKegg. “They gave me a great opportunity here and it was a blast the whole time.”

McKegg would waste no time pitching in for his new club, notching helpers in each of his first three contests, and that would be all the spark he needed. Paired up with some highly skilled linemates, McKegg would roll on to 23 points in his 19 games wearing a Charlotte sweater, with only two players across the AHL scoring more than him over that stretch of the season.

“He has a great set of eyes and can make plays,” said Andrew Poturalski, who frequently connected with McKegg down the stretch. “That’s fun for me.”

The most prolific of McKegg’s contributions to the Checkers was his steady production. The 26-year-old recorded a point in all but two of his games with Charlotte, including a franchise record-tying 12-game point streak.

“On a day-to-day basis you have to be consistent and bring the same energy every time you’re out there, especially for a guy in my position,” he said. “You’ve got to be going all the time.”

Instilling those values onto his new teammates was an added bonus for McKegg, who filled a veteran role on a staggeringly young squad.

“There was a ton of young guys here, they’ve got a really good core of young guys coming up,” he said. “To be a good pro it’s all about that consistency. You’re not going to have your best night each night, but if you bring the same work ethic it’ll do you a lot of good going forward.”

Headed into the offseason as a restricted free agent, McKegg was quick to mention the solid fit between him and the Checkers.

“I really enjoyed my time here,” he said. “It was a pleasure working with these guys and the organization was great. I have nothing but good things to say about Charlotte.”

With that as the case, both McKegg and the organization are likely looking forward to next season, as the forward was qualified earlier this week and looks to be slated to return to the fold.

“I think he loves it here and is very happy here,” said head coach Mike Vellucci during the season. “He’s played very well and I’m very happy for him.”

Now comes the tough part, as McKegg ramps up to keep his hot finish rolling into his seventh pro season.

“It’s a big thing now, the older you get the more you have to be in shape and the more prepared you have to be when camp comes around,” said McKegg. “But getting ready to go again is something I’m looking forward to.”