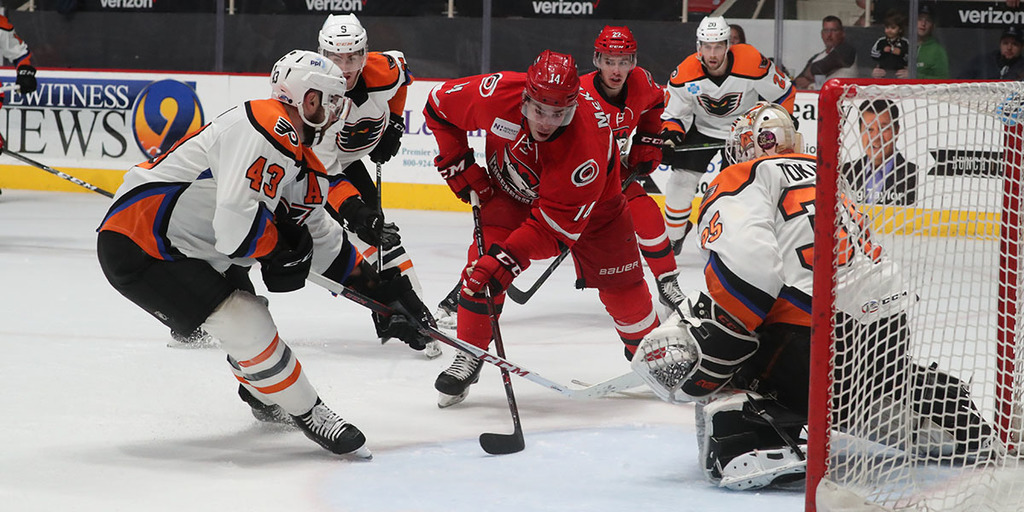 No team in the AHL could match the Checkers’ offensive output this season. Their next playoff opponent, however, came close.

The Lehigh Valley Phantoms averaged 3.42 goals per game during the regular season, just a shade under Charlotte’s league-leading 3.45 mark, setting up a clash of the two most prolific attacks in the AHL.

“Lehigh has a lot of high-end skill,” said Roland McKeown. “They’re an offensive threat. We led the league in goals but they’re right up there with us so it’s going to be a fun series.”

The Checkers’ first-round opponent – the Wilkes-Barre/Scranton Penguins – had no shortage of offensive firepower, but even so they pale in comparison to what the Phantoms can bring.

“They’re pretty comparable in terms of being older teams with more experience,” said head coach Mike Vellucci. “I think Lehigh has more offense than Wilkes-Barre had, we were one and two in scoring in the league. They’re way more explosive.”

The Atlantic Division rivals went toe-to-toe eight times during the regular season, and while the two sides split the series down the middle, it gives the Checkers plenty of tape and a strong sense of how the Phantoms play heading into Round Two.

“We’ve seen them a lot so we’re familiar with them,” said Vellucci. “There’s not going to be too many surprises. We have to be on the right side of the puck and above them all over the ice. The key is they like to blow the zone and they want to stretch it out as much as possible. So we have to be aware of who’s behind us and make sure we stay above them.”

“They play really quick,” said Andrew Miller. “They have some good scorers and some offensive defensemen. They play fast and transition the puck well. They’re a tough team to play against.”

The Phantoms’ offense was buoyed during the regular season by a group of high-end scorers, led most notably by this year’s AHL MVP Phil Varone. The veteran forward combined with Greg Carey – one of just six 30-goal scorers leaguewide – and second-round pick Nicolas Aube-Kubel to give Lehigh Valley a strong offensive punch up top that could rival Charlotte’s lethal top line.

“As defensemen we have to make sure that we’re shutting their top lines down and that’s what this series will come down to,” said McKeown. “The top lines are going to be huge in this series. I’m confident in ours and it’s our defensemen’s job to shut theirs down.”

It’s not just the Phantoms’ forwards who are dangerous scoring options. Two-time AHL Defenseman of the Year T.J. Brennan is renowned for his scoring prowess from the blue line and has become a focal point for the Checkers’ game plan.

“He’s probably going to have the puck quite a bit so you have to keep an eye on him,” said Vellucci. “He’s always up the ice, he’s very smart, he’s good on faceoff plays in the zone. We have to take our chances to hit him when we can. If he’s got the puck we’ve got to finish our hits and wear him down so it makes it harder as the series goes on.”

“He runs their power play and he’s always a threat to shoot from the top,” said McKeown. “On the PK you’re always thinking of that but you have to be aware of the flanks too. Brennan’s been in this league for a long time and he has a lot of experience so we have to be aware of him jumping in the rush.”

While slowing down the Phantoms’ offensive attack will be a key task for the Checkers, they have plenty of firepower to throw back at their opponent, as evidenced in their first-round sweep of the Penguins. Charlotte finished the first round as the second-best offense in the Calder Cup playoffs, averaging nearly five goals a game. While that’s hardly a surprise given the Checkers’ scoring success in the regular season, the coaching staff harped on the increased difficulty and stylistic difference of scoring in the postseason.

After three games it seems like the team listened.

“We’ve talked about it all year, it just seems like we paid a little more attention to it in the playoffs,” said Vellucci. “Those are the kind of goals that are going to win games. The overtime winner was a deflection through a screen, then the winner the next night was on a screen from the point. You’ve got to get in front of him and you have to make it hard. You’re not always going to score the pretty goals, especially in the playoffs. If you watch the NHL playoffs right now, it’s all net-front plays and deflections and rebounds.”

A commitment to that style will continue to be paramount to the Checkers’ success as the playoffs roll on.

“Playoff hockey is tough and stingy,” said Miller. “You don’t get a lot of odd-man rushes so you have to bring pucks to the net often and make sure you get traffic and get on those rebounds.”

Facing off against the number one seed Phantoms, the Checkers will start these offensively charged division finals on the road. It’s a reversal from their last series where they were able to jump ahead early thanks to Games 1 and 2 being at home, but that isn’t fazing Charlotte.

“I think the key is just playing hard and playing your game,” said Miller. “Home ice advantage is always nice but it doesn’t mean you can’t play well and match their energy. It’s the second round of the playoffs so we should come out flying.”

With a week of rest between the first two rounds, the Checkers are heading back to Pennsylvania on a mission.

“We’ve got to go into that building prepared to win,” said McKeown. “That’s our mindset going into it.”