Checkers Counting On Next Man Up 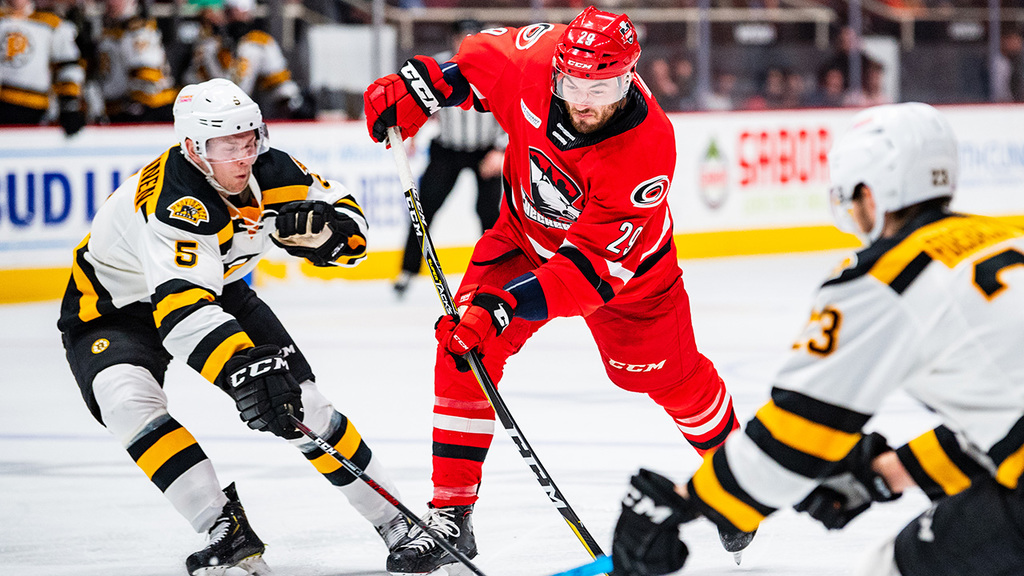 As it stands, Carolina is the only organization with its NHL, AHL and ECHL teams all still in their respective playoffs. While having three different teams succeeding at one time is a hard-enough feat, the Checkers are learning just how much the grind of the postseason can take a toll on a roster.

Injuries haven’t been kind to the Hurricanes, who have lost an array of important players over the last few weeks – including three in Sunday’s Game 2 alone. Those holes in the lineup have been filled by a slew of recalls from Charlotte, leaving the Checkers’ roster just as ravaged.

Still, while it’s tough to see key players depart, it’s all a part of the system.

“That’s the way it goes,” said head coach Mike Vellucci. “This is part of being in the minors. My job is to get them to the next level as fast as possible. It’s a joy to watch them go up.”

Never one to shy away from a challenge, Vellucci spent the first round patching together a lineup without a handful of integral pieces. By the looks of it, he’ll have to do the same for round two as well.

“We’re a solution-based team,” he said. “We’ll have to figure it out on our own here. But you saw last series, everything worked out. We just have to keep plugging away.”

Up front the Checkers are without two of their centers in Patrick Brown and Clark Bishop, who are both filling in up top as Carolina works through injuries – some of which are hopefully close to returning. Losing those two has made the Checkers thin down the middle, as well as taking away two strong penalty killers and – in Brown’s case – the team’s captain.

Charlotte’s remedy has been an increase in action for a group of young talent. Stelio Mattheos, who joined the Checkers at the tail end of the regular season after wrapping up his junior career, has slotted in at center and helped anchor the fourth line, while Jacob Pritchard – who just finished his college season mere weeks ago – has been thrown right into the thick of things and hasn’t looked out of place.

The blue line has had an even rougher go of things in Charlotte. Trevor Van Riemsdyk exiting Carolina’s Game 2 had Jake Bean heading up to Raleigh where he joined Haydn Fleury, another workhorse for Charlotte throughout the regular season. Couple that with the loss of Roland McKeown to injury and suspensions to Bobby Sanguinetti and Trevor Carrick – the latter of whom still has one game left to serve – and the Checkers have a staggering amount of defensive talent unavailable to them. But just as they did up front, fresh faces have stepped up when called upon, with ECHL standout Derek Sheppard and college free agent Eric Williams both pitching in to help the Checkers dispatch Providence in round one.

“Everyone has been very good,” said Vellucci. “For some guys it’s part of putting them in a position to succeed earlier in the year. We took some time and put some guys in and got them used to some different things. Now it’s a matter of the next guy up getting the job done.”

The most recent blow was the loss of Petr Mrazek in Carolina’s Game 2 win. The domino effect of that injury has led to Carolina recalling the AHL’s Goalie of the Year Alex Nedeljkovic from Charlotte.

Losing a goalie the caliber of Nedeljkovic – who started all four round-one games for Charlotte – is tough, and it would likely be a nail in the coffin for most teams. But the Checkers picked up some insurance at the deadline in the proven Dustin Tokarski.

“He’s got experience and that’s the reason we got him, in case something like this happened,” said Vellucci. “He’s very mature, his teammates love him and he’s been great for us. There’s not going to be a drop off.”

Mrazek, who will not dress for the Canes’ Game 3 Wednesday night, is listed as day-to-day, so there’s no telling how long Nedeljkovic will be needed in Carolina – there’s always the chance he could return to the Checkers before Friday’s Game 1. But it’s hard to imagine a better situation for a team who just lost their workhorse in net than trotting out the duo of Tokarski, who went a perfect 7-0-0 during the regular season with Charlotte while posting a 1.14 goals-against average and a .956 save percentage, and Jeremy Helvig, who had a breakout rookie season for Florida and ranked third in the ECHL in both wins and goals-against average.

“It’s definitely tough, Ned’s been a rock for us all year,” said forward Andrew Poturalski. “But so has Dustin, he hasn’t been beat yet and he knows what it takes to win. We’re happy to have both of those guys with us. To have that kind of depth at that position is huge.”

The Checkers’ depth will continue to be tested as they take on a tough Hershey squad and the Hurricanes look to make quick work of the New York Islanders. But as long as the next man up keeps delivering, the Checkers will keep finding a way to fill their lineup.