Checkers Prepare For Second Half With Positive Outlook 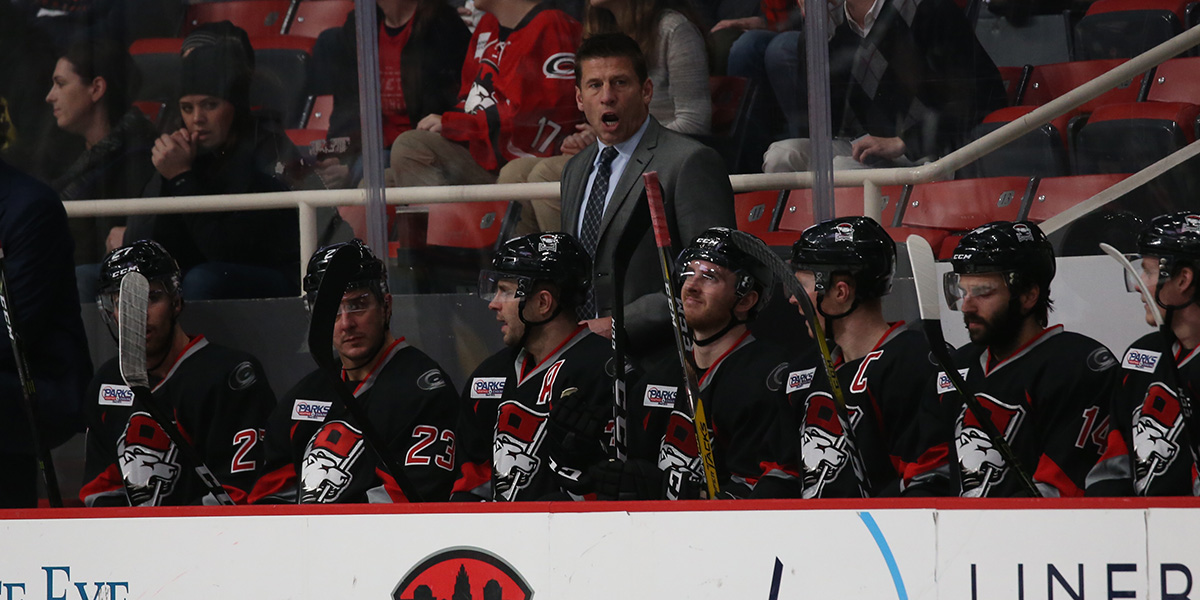 It may feel like it just started, but with 42 of 76 games in the books, the Checkers have passed the halfway point of the AHL season.

That first half of the year wasn’t the kindest to Charlotte. The Checkers currently sit at 18-21-3, marking only the second time in franchise history that they have had a record below .500 after 42 games, barely edging out the 2014-15 campaign.

“We had a long stretch where we didn’t scrape any points together,” said head coach Ulf Samuelsson. “That’s why we are where we are.”

That stretch Samuelsson mentioned was a particularly rough slate in November and December that saw the Checkers go 4-14-2, including 12 consecutive road games without a win.

While that slide put the Checkers in quite a hole in terms of their position in the standings, the team has seen a bright spot as of late that they’re choosing to latch on to.

Since Jan. 10, Charlotte has gone 5-1-1 and picked up wins against teams all ahead of them in the standings. This hot streak has helped give the team a boost out of the basement and, in fact, they sit just four points out of the final playoff spot in the Central Division.

“I think we have a really good group of young players that are developing,” said Samuelsson. “In a lot of areas we’re getting better and better each day. It’s a competitive and committed group of players.”

The key for Charlotte moving forward will be consistency. Since winning six straight early on in the season, the Checkers have only won consecutive games three times, and never more than three games.

Given the ground they need to make up, the Checkers will need to see that trend reversed, but Samuelsson warns of not letting the team get ahead of themselves.

“It’s one of those things where you have to focus in on the process,” he said. “You can’t be too worried about the long-term goal. You have to compete in every shift of every game.”

While they have seen their fortunes start to change with this most recent hot streak, the Checkers are well aware that there is no shortage of areas to work on.

“Unfortunately, it’s the most important parts that need the most work,” said Samuelsson. “We need to continue to get the goaltending that we’ve been getting the last 10 games or so and our specialty teams has to be better.”

Of those two questions marks that Samuelsson brings up, goaltending is the one that appears to be moving in the right direction. The Checkers’ two young netminders – Alex Nedeljkovic and Daniel Altshuller – have both been playing at their highest level of the season over the past few weeks, with the former winning each of his last three starts and the latter allowing a single goal in two of his last three starts. Those two, combined with the proven entity of veteran Michael Leighton if he should return to Charlotte, give the Checkers a solid situation in net as long as they can keep their momentum up.

The power play remains the team’s most glaring flaw, ranking last in the league by a substantial margin. As Samuelsson mentioned, that will need to be remedied in order for the Checkers’ to continue climbing the standings. But if there is a glimmer of hope in that department, it is likely to be the pair of rookies who are currently leading Charlotte’s offensive charge.

Andrew Poturalski and Lucas Wallmark rank first and second on the team in scoring and have been two of the hottest players over the recent winning stretch, each totaling six points in their last seven contests.

“They’re young players who are playing very well,” said Samuelsson. “They’ve had some ups and downs and they’re still working on becoming an everyday pro because consistency is so important in our business, but they’re doing tremendous.”

With arguably the most momentum they’ve had all season, the Checkers will be looking to keep things rolling against a schedule that doesn’t get any easier. In a tough Central Division where the fifth and eighth place spots are separated by just five points, every game becomes that much more important down the stretch, but the Checkers are ready for the challenge.

“We keep it a very positive atmosphere and guys look forward to coming to the rink and playing games and putting their time in to get better every day,” said Samuelsson. “I’m excited about the second half.”