Checkers Regroup After Additions And Subtractions At Deadline 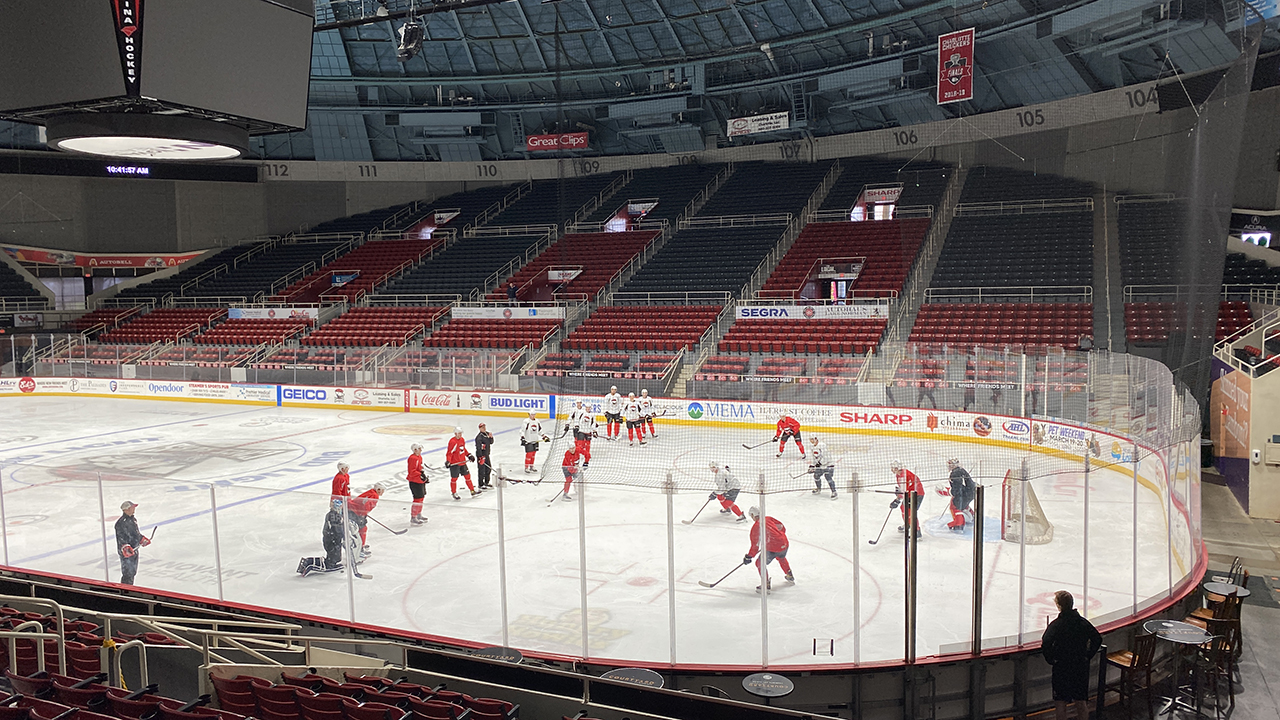 The dust has settled on the NHL trade deadline, and with both sides of their dual affiliation swinging a slew of deals, the Checkers are ready to take inventory and buckle up for the home stretch.

The biggest move affecting Charlotte came the day before the deadline, as the Panthers pulled off a blockbuster deal to acquire Claude Giroux from the Flyers.

Part of the return for the star forward was Owen Tippett, who had been staggeringly good for the Checkers over 12 games played - posting 18 total points (6g, 12a) and finding the score sheet in 11 of those 12 contests.

“In the American League it’s always happy and sad,” said Checkers Head Coach Geordie Kinnear before the deadline. “You’re always happy for guys to go on and get another opportunity to play in the National Hockey League, but you’re sad because they’re your teammate and you’ve built a friendship along the way. So it’s one of those situations that’s part of the business, but they’re people too and there’s always those relationships that are hard to leave when you’re with a good group of people like we have.”

Tippett and Giroux weren’t the only players involved in the deal, however, as the Panthers received a pair of forwards in Connor Bunnaman and German Rubtsov who were subsequently assigned to Charlotte.

Being dealt in a deadline move was not something Bunnaman had on his mind as he prepared for the Phantoms’ road game in Springfield on Sunday.

“I was playing sewerball with the guys when coach gave me the news,” he said. “I was shocked, I didn’t expect it.”

Bunnaman and Rubtsov were part of a Lehigh Valley team that currently sits with the worst record in the Eastern Conference, so the move to a climbing Charlotte club could be a positive change.

“I was in Lehigh and Philly for four years and I’m excited for the opportunity here,” said Bunnaman. “Everybody seems great so far.”

“You look at the situation they were in, in and out of the lineup some, still trying to find their game,” said Kinnear. “So it’s a great opportunity for them here, fresh start.”

Bunnaman, 23, has seen time in the NHL in each of his last three seasons and is just a few years removed from a 19-goal, 32-point campaign as a rookie in 2018-19, while the 23-year-old Rubtsov was the 22nd overall pick in 2016 and has logged games in both the KHL and NHL over his career.

For the former, his priority is showcasing what he does best.

“Center, left wing, I can kind of play everything,” said Bunnaman. “Big PK kind of guy. Hard in the corners, make time and space for the skill guys out there so they can score the points.

“Florida just told me to go out there and work hard. I’ll have my opportunities when they’re available. Obviously Florida right now is a pretty good team. So I’ve just got to play my best and do what I can do.”

Today’s practice, a shorter skate that featured lots of three-on-three battles, was a nice way to ease the new faces in while giving the coaching staff a glimpse at the newest additions to the roster.

“Today was fun, kind of an easy day,” said Bunnaman. “So it’s a good day for me to get to know the guys and just get used to everything here. The coaches seem really nice, I had a little chat with them and I’m excited.”

The Charlotte roster also saw the addition of Victor Rask, a former Checker acquired by Seattle who should be joining the team later this week.

“He’s a 20-foot player and a very intelligent player,” said Kinnear, who was an assistant coach in Charlotte for Rask’s rookie 2013-14 campaign. “He wants to make plays, he has the puck a lot. He was always prepared and ready to go, very unassuming. Great teammate. I’m excited to help him grow his game but also excited that he’s part of our group.”

While those deadline moves added some solid pieces to the Charlotte roster, the ripple effects of the day also led to a tough loss. Currently with Seattle, Kole Lind was not made eligible for the remainder of the AHL season and will remain with the Kraken for the rest of the year.

It’s a blow for Charlotte, as Lind is currently tied for the team scoring lead, but the young forward earning an extended NHL look is something to celebrate when it comes to the developmental side of the AHL.

“It’s what it’s all about,” said Kinnear. “Lindy has an opportunity. He brought a lot of grit to our lineup over time. Seattle saw something in him so it’s great for him.”

Overall, given the number of trades completed over the last 48 hours, things could have shaken out much differently for the Checkers. But at the end of the day the coaching staff is ready to take their roster and prepare it for the home stretch.

“As I always say we’re focused on the group that’s here,” said Kinnear. “We’re excited for the new additions and we’re going to keep building.”