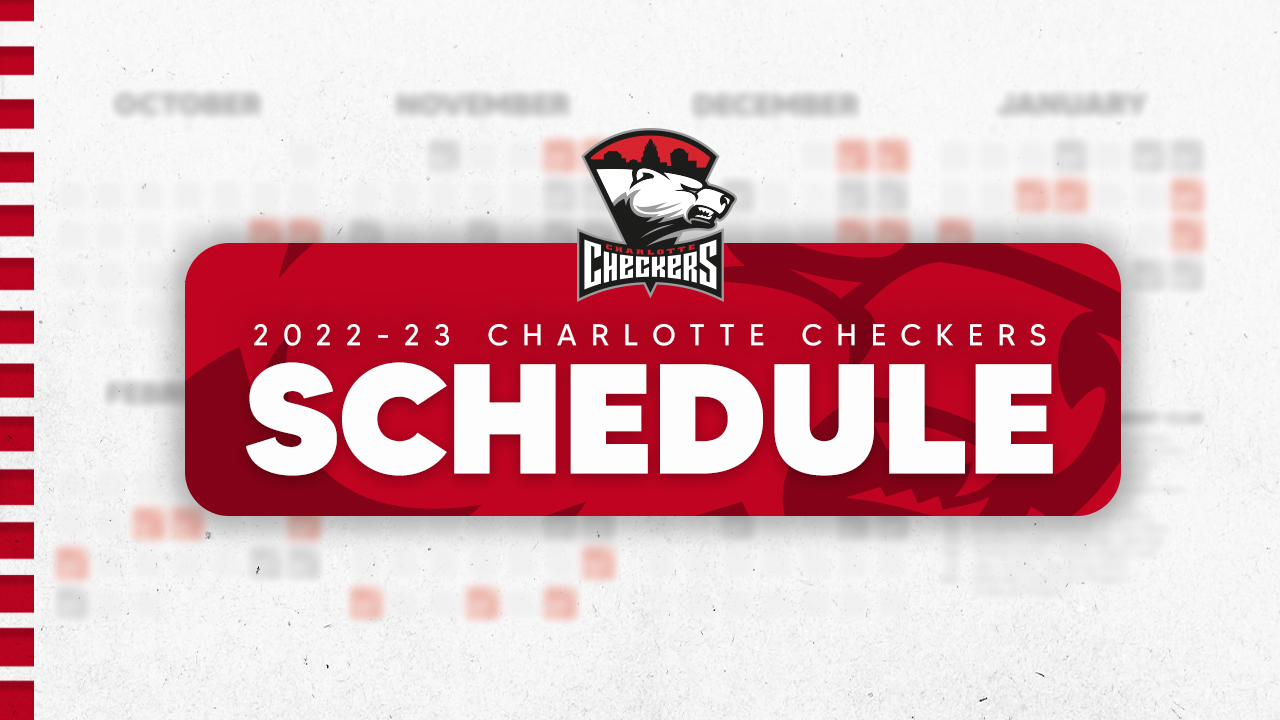 We’re another step closer to hockey season, as the AHL released its 2022-23 schedule today.

The 72-game slate kicks off in the Queen City on Oct. 14 and can be viewed in a variety of ways - on our Schedule page, in printable calendar and list forms, on the background of your computer and even directly on your personal calendar.

Season tickets, mini plans and group outings are all on sale now, while individual tickets will go on sale later this summer. The promo schedule should also be released in the coming weeks.

Now, let’s take a look at some of the highlights on this year’s schedule.

Add to Calendar Calendar View List View Wallpapers
During their 11 seasons in the AHL, the Checkers have begun each campaign on the road. That’s not the case this year, though, as the season opener will take place in Charlotte for the first time in franchise history.

The Checkers’ new slate of games is heavy on prime weekend dates. Of the 36 home games, 23 land on a Friday or Saturday - plus another four that take place on Sunday.

New this season, four of those Saturday home dates will feature a 4 p.m. puck drop - a tweak that can open up the biggest games of the season to a new group of fans.

HOME FOR THE HOLIDAYS

The schedule once again features a group of games around Thanksgiving, with a slight twist. After starting the holiday week with games on Monday and Wednesday, the Checkers will host the Utica Comets for a 4 p.m. Black Friday contest the day after Thanksgiving before finishing up the run with a rematch on Saturday.

Additionally, the Checkers will host a slew of games ahead of the Christmas break - running up to a matchup with Providence on Dec. 23.

The Checkers will face four different occasions of three games in three nights this year - one more than they saw last season - and as usual, each of those instances will happen on the road. The final two of those three-in-threes will find Charlotte playing in three different cities on consecutive nights - and in a uniquely challenging twist, those series come back to back on the schedule, giving the Checkers a gauntlet of five different opponents over a 10-day stretch.

For the first time since the pandemic-shortened 2019-20 season, the Checkers will face the Toronto Marlies - hosting them in mid February before visiting the Great White North in mid March. That stands as the only new team added to Charlotte’s slate, taking the place of the Texas Stars from last season’s schedule. One of the games in Toronto (March 17) will be played at Scotiabank Arena, home of the NHL's Maple Leafs.

After several years of different teams playing a different number of games, this season will see all AHL teams play a unified 72 games.

Charlotte - the defending Atlantic Division champs - will play 52 games within its own division, while the other 20 will see it take on opponents from the North Division.