Daccord Fitting Right In With Checkers 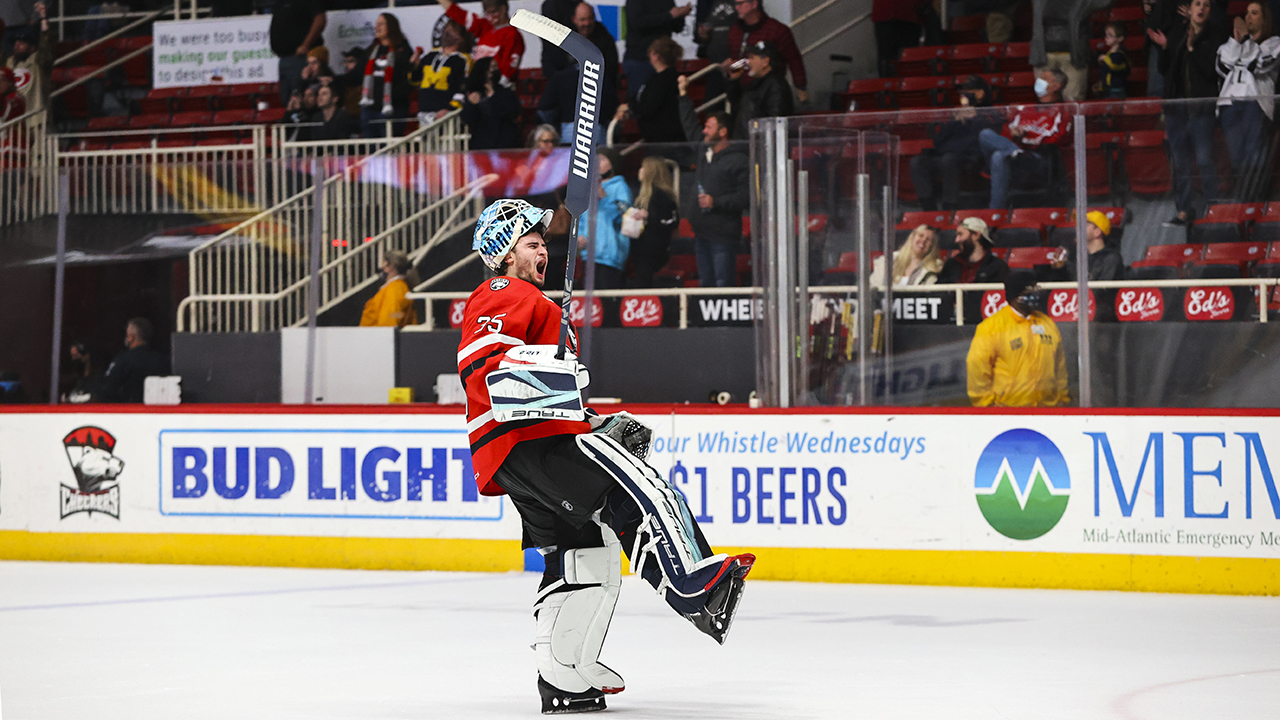 Joey Daccord has made the most of his opportunities throughout the years.

Whether it was with Arizona State where he won 32 games in three years, or with the Ottawa Senators where he experienced plenty of ups and downs, the 25-year-old finds a winning role wherever he is.

The same goes for this year, as Daccord has split time between the Charlotte Checkers and Seattle Kraken after being taken in the expansion draft during the offseason.

The goalkeeper is having his most productive season since the 2019-20 campaign and has had a lot of fun doing so. After he battled an ankle injury during the 2020-21 season, Charlotte has been a fresh start for Daccord.

“The set-up here has been unbelievable, the players and the guys are awesome,” Daccord said on his time so far in Charlotte. “It has been really fun to play here so far.”

Daccord finds himself in a rare situation where his NHL team happens to be on the other side of the country, almost 2,800 miles away. The Kraken have called the reliable goaltender numerous times this season, which has helped Daccord rack up some frequent-flyer miles and learn lessons along the way.

“It’s been mentally and physically exhausting. I think between team flights, call-ups and commercial flights I’ve flown cross-country over 12 or 13 times now,” said Daccord. “But they trust me in Seattle, they trust me here. They keep putting me out there and letting me do my thing.”

When Daccord has been with the Checkers this season, he’s been a workhorse. He’s played in 19 games and has a 9-8-2 record, leading all goalies on the team in games played and wins. With Seattle, Daccord is still searching for a win but has racked up 96 saves in four games.

In Charlotte, Daccord has brought success in front of the net, but he’s also bringing confidence that helps carry the team. Checkers forward Kole Lind, who is also signed with the Kraken, has seen up close what Daccord is capable of both on and off the ice.

“He’s been a brick wall back there,” said Lind. “He’s fun to be around at practice and just keeps things light-hearted.”

Lind says the two have spent time together in both Charlotte and Seattle ― especially when it comes to flights ― which has allowed them to build a friendship.

From a player standpoint, Lind admires the confidence Daccord brings.

“[He] gives us a lot of confidence knowing we have a guy like him back there,” said Lind. “He can play the puck really well, play all areas and is just a really good goalie.”

Daccord credits the swagger his team sees back to his high-school days.

“It honestly started to develop in high school when I felt like I was pretty good. I probably thought I was better than I was to be honest,” Daccord said. “I think there’s something to be said for giving your team confidence when they’re on the bench and they’re watching you coming up with big save after big save. I think that goes a long way.”

“He’s outstanding, helps the defense break the puck out and what I like is his work ethic,” said Kinnear. “He’s a true pro, a great teammate and fits the bill for what Charlotte is all about.”

Daccord hasn’t been perfect this season, but through it all he looks to battle no matter what.

“There’s always going to be ups and downs, even in the last few weeks I lost three in a row,” Daccord said. “The only way I know how to work out of defeat is to work hard and to get through it. To learn how to go through the hard parts and come out stronger is really crucial.”