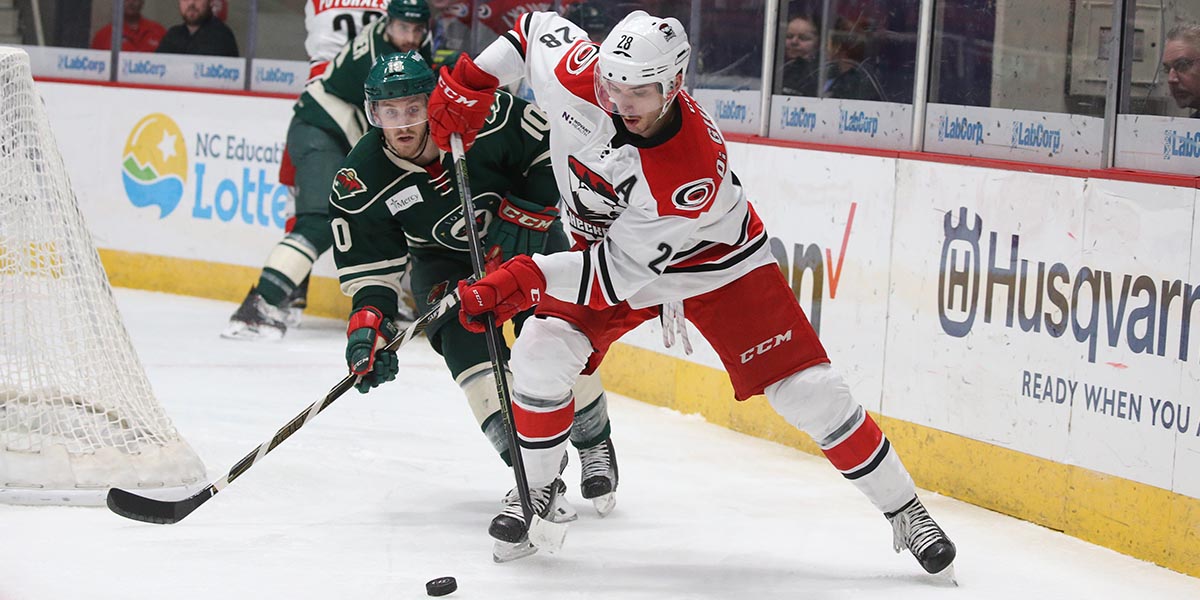 Anyone who has watched Phil Di Giuseppe play over his first two pro seasons isn’t surprised by the level he competes at every night this year. But even so, there are times where it is hard to wrap your head around the ease with which he moves around opponents with the puck.

“It’s unexplainable raw talent,” said Checkers video coach Myles Fee. “It’s unbelievable to watch him. You see him in practice every day and he has even more in his bag than what you see in games.”

A move that Di Giuseppe has seemingly added to his arsenal this season is the ability to carry pucks into the offensive zone and push them into the dangerous areas, blowing by defenders to set up scoring chances.

“It’s something I tried working on this year,” said Di Giuseppe. “Instead of chipping it in and going after it, I’m carrying it in and making plays.”

Di Giuseppe, whose 18 points in 32 games gives him a better scoring clip than his 30-point rookie year, entered the pros with a plethora of talent, but has put in the work over the last three seasons to consistently be one of the most dominant players on the ice at all times.

“It’s unbelievable watching skill guys like that, the way they can see the ice and see the puck and see what’s coming at them,” said Fee. “It’s amazing the hard work he puts in on that skill.”

As he’s shown multiple times this season, switching into his top gear makes Di Giuseppe a frustratingly tough player to deal with for opponents.

“Everyone respects his skill and speed and when you do that as a defenseman you’re backing away instead of challenging him,” said head coach Ulf Samuelsson. “I think he’s an intimidating player to play against, especially when he’s skating full speed, that’s when he’s at his best. Full speed, whether it’s on the forecheck or with the puck.”

While Di Giuseppe has been impressive night in and night out, his production has taken a bit of a dip as of late, with his goal Friday against Stockton standing as his only point in the last eight games. While that dry spell stands out on paper, there’s little worry that the forward won’t be able to shake it.

“Every goal scorer goes through a slow spot or a drought, if you will,” said Fee. “What will get him through it will be going to the net.”

The key causes of Di Giuseppe’s drought appear to be issues that the coaching staff have been trying to address to the team as a whole.

“We talk about the 70 percent area – that’s where 70 percent of goals are scored from,” said Samuelsson referring to an area around the net. “If you’re inside there you almost have to try to shoot.”

“I’ve been going over it with coach and I think part of it is that some of my shots are from outside that good scoring opportunity zone,” said Di Giuseppe. “I need to get inside that and that’s something I’ve been trying to work on. I think I have over 100 shots but only nine goals right now, so I’m shooting under 10 percent.”

With the line combinations starting to solidify down the stretch, Di Giuseppe has found himself settled in with Wallmark and Valentin Zykov. That group has performed extremely well all season long and will likely be the source of Di Giuseppe returning to his scoring ways.

“Ulf had me analyze his plus/minus on his chances and he’s actually fed off of Zykov a lot,” said Fee. “It’s amazing how that whole line has produced as a group. They’ve been playing extremely well together.”

Given the immense talent he possesses, it won’t be long before Di Giuseppe is back lighting the lamp on a consistent basis.

“Individually, you just find a dry spot, but he’ll get I back,” said Fee. “He’s working on it every day. He’s come and asked me for a few things and I’m more than happy to work with him, as are Ulf and Peter as well.”

Having that network of hockey minds at his disposal is a beneficial resource for the young forward, and one that he doesn’t take for granted.

“I’ve been talking to Myles and Ulf a lot lately,” said Di Giuseppe. “Myles is very passionate and he’s always cutting video and watching it so he’s been a lot of help. And then Ulf has been going over video with me as well. Obviously it’s frustrating when you’re not scoring, but there’s definitely a lot of help when you have someone showing you where you need to get better and where you have to get to in order to get those better chances.”