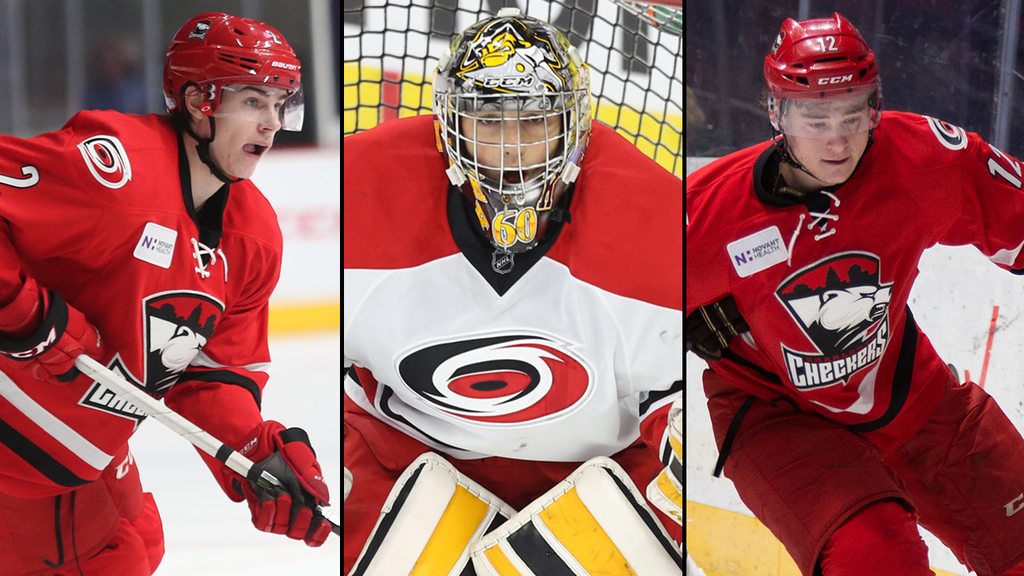 The first step toward a new hockey season is coming as the Hurricanes are headed back to Traverse City, Michigan to take part in the annual prospects tournament. Carolina is sending a stacked squad to the event, one that features a number of high-profile players and several prospects who are slated to cut their teeth in Charlotte this coming season.

Before the tournament begins, here are five things to watch for.

The Traverse City tournament is generally a place for younger prospects to showcase themselves and for NHL teams to get a look at how their pipeline stacks up down the road. Sometimes though, more experienced players are added to the mix to flesh out the squad. Notably on this year’s team are Nicolas Roy and Julien Gauthier. The duo are coming off of solid rookie seasons in Charlotte, one filled with the ups and downs associated with making the leap to the pro game. But what both players possessed in their first season was a strong physical presence playing amongst men in the American League. Now heading back to Traverse for the second straight year, Roy and Gauthier should be poised to dominate a tournament filled with younger prospects. Look for the two to really flex their muscles throughout the tournament and build up some momentum heading into their sophomore seasons.

Carolina’s Traverse City squad also features Aleksi Saarela and Janne Kuokkanen, both coming off their first full pro campaigns. While Roy and Gauthier fit into the physical role of the pro game, Saarela and Kuokkanen showed strong scoring prowess with the Checkers a year ago, something that should shine brightly during this tournament. Traverse City could be a solid confidence booster for both Saarela, who showed off one of the deadliest shots in the AHL last season, and Kuokkanen, who made the Hurricanes out of training camp a year ago.

ON THE BLUE LINE

While the forward corps features an impressive combination of established pros and hyped-up prospects, the blue line for the Traverse City squad is significantly thinner in terms of big names. In fact, of the seven defensemen listed on the roster, four are invitees. The other three include 2017 draft pick Brendan De Jong, who is slated to return to junior this coming season, as well as Jake Bean and Michael Fora.

Bean, the 13th overall pick in 2016, and Fora, who signed a two-year contract with Carolina after spending the last three years playing in his home country of Switzerland, both figure to be key parts of Charlotte’s blue line this coming season so strong showings in Traverse City could be a nice ramp-up to the regular season for the duo. Bean established himself as a lethal offensive weapon during his junior career and got a taste of the pro game during the Checkers’ postseason run a year ago and should emerge as one of the most talented skaters on the Traverse City squad. Fora remains more of an unknown as he makes the full-time jump to North America, but enters the tournament as the oldest player on the team and boasts significant pro experience.

The Hurricanes’s Traverse City roster boasts a pair of highly anticipated incoming rookies in Andrei Svechnikov and Martin Necas who are likely slated to jump straight into the NHL lineup come opening night. While it appears unlikely that Charlotte will see either first-round pick next season, it should be a positive experience for the incoming Checkers to play alongside proclaimed “NHL-ready” skaters like Svechnikov and Necas.

HELVIG BETWEEN THE PIPES

It looks like the Checkers are going to head into training camp with a crowded crease. If Scott Darling and Petr Mrazek take the two spots in Carolina, that leaves Alex Nedeljkovic, Callum Booth, newcomer Jamie Phillips and rookie Jeremy Helvig to fill the four goalie slots in Charlotte and Florida. Coming off a stellar, record-breaking sophomore season, Nedeljkovic likely has the number one spot all but locked up, but the back-up role could be up for grabs between the remaining trio. Helvig, jumping to the pros after finishing his junior career in Kingston, will get to start his quest for the job early as the only netminder out of that group to head for Traverse City, where he’ll backstop the Canes for the second year in a row. The 21-year-old Helvig could have his work cut out for him battling against the more experienced Booth and Phillips, but a strong showing in Traverse City could be a push in the right direction for the young netminder.

*UPDATE* Per Michael Smith, Cliff Pu has not been cleared for game action and stayed behind in Raleigh.

For the first time since being acquired in the trade that sent longtime Hurricane Jeff Skinner to the Sabres, Cliff Pu will don a Carolina sweater at the Traverse City tournament. A third-round pick in 2016, Pu finished up his junior career with a strong season split between London and Kingston and a stellar postseason run with the Frontenacs. Now the Canes will get to see what the 20-year-old can do with some of his future teammates, as Pu will likely spend his rookie campaign in Charlotte looking to replicate the successes of Warren Foegele and Saarela from a year ago.