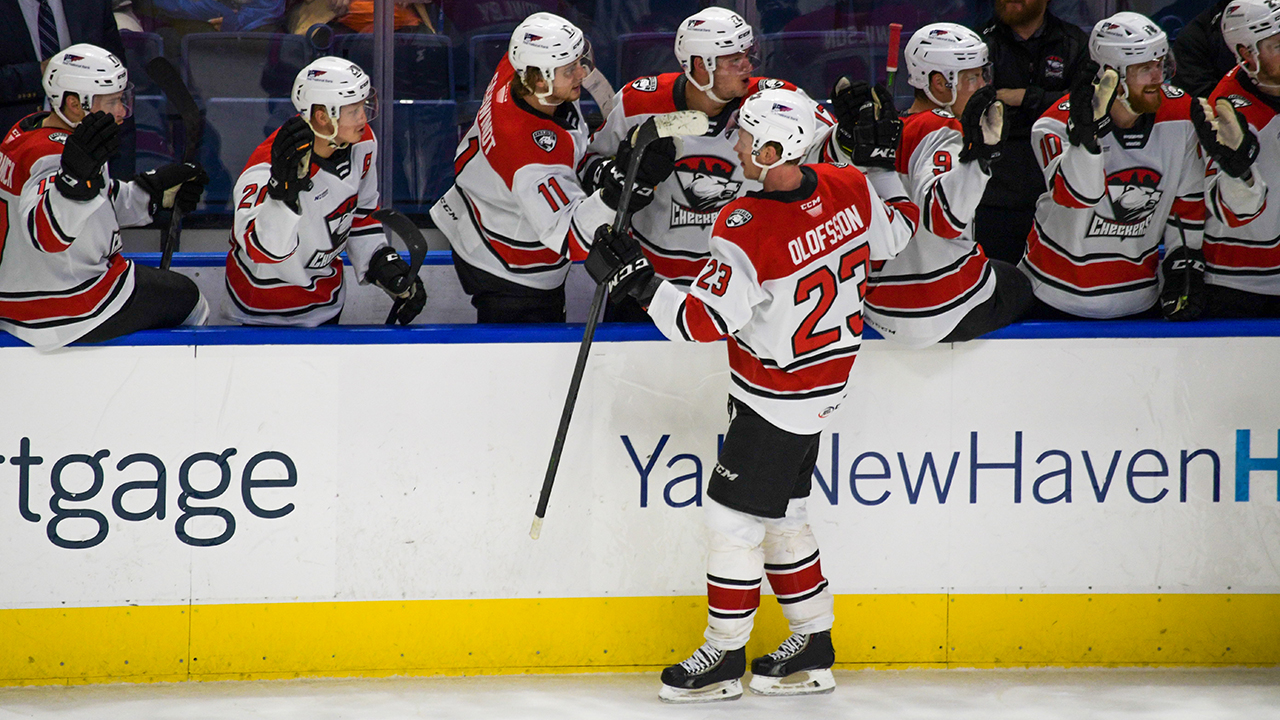 Late in a deadlocked Game 1, the Checkers were buzzing but still searching for that crucial go-ahead tally. The alternate captain lit the lamp twice during the regular season and has just 13 goals in over 300 pro games. But he rose to the occasion and played hero Tuesday night, collecting a loose puck and launching a shot from the high slot into the back of the net.

“Just a lot of bodies in front,” said Olofsson on what he saw on the game winner. “Really good screen from Twarynski and them out there in front. It was just a matter of getting it through the first guy and then hoping for the best.”

That play was one of several occasions in which Charlotte defenders asserted themselves into the offensive action - which was a source of chances throughout the contest.

“I think it was a little more instinctual,” said Olofsson. “We wanted to be hard on them, hard on the forecheck and then sustain pressure in their zone. I think from that shift especially we did a good job of keeping the puck and joining the rush. Bunny [Connor Bunnaman] came over top to cover which allowed us [defensemen] to be in the play and make that happen. Guys cover for each other when we go down as D and that kind of helps keep them in their own zone.”

Olofsson’s winner was the end product of waves of pressure from the Checkers, who erased an early 2-0 deficit and swung the momentum back their way for the final 20 minutes of play.

“It was kind of a tough start, we were a bit rusty, but we’ve had a lot of comebacks this year and a two-goal lead is something that we’ve done before,” said Olofsson. “It was nice, we were pressuring them toward the end of the second and into the third, then that goal kind of came from sustained pressure over those two periods. It was well deserved and then we shut them down defensively.”

Oloffson has been a welcome addition to the Checkers’ D corps after the vet missed two months of the back half of the season due to injury.

“It feels good,” said Olofsson on getting back on the ice. “I built some chemistry with Fleury over the whole season. We’ve become really tight as a group on the ice. Everybody is so familiar with each other now, you’re not thinking out there, everything is in place and the machine is well-oiled and running itself.”

As has been their motto all season though, Game 1 is now in the rear view and the Checkers’ sights are firmly on Game 2.

“Sticking with it and playing our game,” said Olofsson on the keys going forward. “We’ve done a lot of prescouting on them, we’ve had a lot of time to prepare over the two weeks. So now it’s a matter of just going out and playing. Playing intense, playing for each other, doing what we can. Full team effort, full 60 minutes. Game by game, not thinking too far ahead. That’s our mentality.”