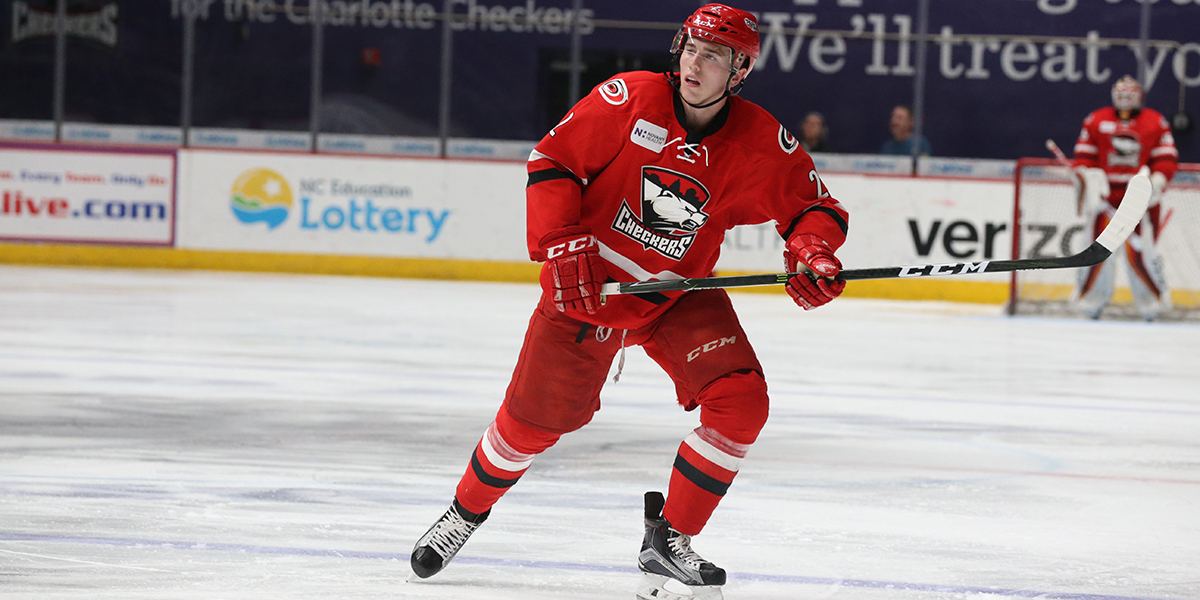 This season saw the Hurricanes carrying a large quantity of defensemen at the NHL level. And while that logjam up top may have derailed Haydn Fleury’s chance at an NHL debut, his stay in Charlotte might end up shaping a strong career ahead.

Selected seventh overall in 2014, Fleury entered his rookie year with some high expectations on his shoulders, having lit the lamp in his lone taste of the pro game two years prior with Charlotte.

The full-time jump to the next level proved to be a bit tougher for the young blue liner, who collected just four points through the first two months of the season and once found himself a healthy extra. That slow start reached a head when Fleury suffered an injury that sidelined him for nearly two weeks in early December. While being forced to overcome an injury early in your rookie season can prove to be quite the hurdle to some, it provided Fleury with a spark.

“Honestly, getting hurt was probably the two weeks where my season turned around,” said Fleury. “I came back in that first game and got two goals and got some confidence in myself that I could play in this league.”

That multi-goal effort in his return – the first in Fleury’s career – gave the blue liner a spark, which he then turned into a full-fledged transformation down the stretch. After recording 10 points and an even plus-minus rating in his first 38 games of the season, Fleury closed with 16 points and a franchise-record plus-16 rating in the last 31, cementing himself as one of the team’s top defensemen.

“It’s tough to come in and play regular shifts and a lot of minutes like he did,” said head coach Ulf Samuelsson. “He wasn’t in perfect shape, but he got in shape, got his weight down and his nutrition was good, so he grew up. With some help from our staff, we worked on everything from power skating to just being a pro and I think that really paid off for him.”

“For the first half of the year I wasn’t contributing as much on offense as I would have liked,” said Fleury. “I had chances and stuff but the numbers weren’t coming. The second half I took steps and started making plays and got rewarded with some goals. That will be something that comes with experience. I’ll learn more next year and build from there.”

Aside from coming into his own at the pro level, Fleury was aided by the acquisition of Philip Samuelsson. The two joined forces immediately following the trade and became a reliable duo.

“When Sammy got traded here we played together ever since and I think we both took a step in the right direction,” said Fleury. “You got familiarity with the guy you were playing with. For a while there we had injuries and stuff so you were playing with a different guy every shift and it made the game a lot harder. We got some familiarity with each other and we built chemistry from there.”

The younger Samuelsson, who has seen his share of stops around the league, had glowing reviews for his rookie partner.

“It’s always nice to play with a promising young player like Haydn,” he said. “He’s got a bright future ahead of him.”

Taking a glance at Fleury’s trajectory across the season, it wouldn’t be a stretch to make the case for him getting a shot at the NHL roster at some point. But unlike last season when Brett Pesce and Jaccob Slavin were needed up top, the influx of blue liners on the NHL roster let the Hurricanes take things slow with Fleury, a tough but understandable approach that let the rookie experience heavy minutes and responsibility with the Checkers.

“That was kind of a disappointment,” said Fleury of not making his NHL debut this season. “But when I look at it, I developed a lot this year. From my perspective I played in a lot of good situations and earned a lot of confidence in myself and confidence from the coaches. The way my play developed over the year I became a harder player to play against.

“I feel like I’m more NHL ready now then I was at the start of the year. It’s disappointing not being able to play a game, but I know I’ll be ready for a good strong camp next October.”