In The Trapezoid With TJ - Splitsville 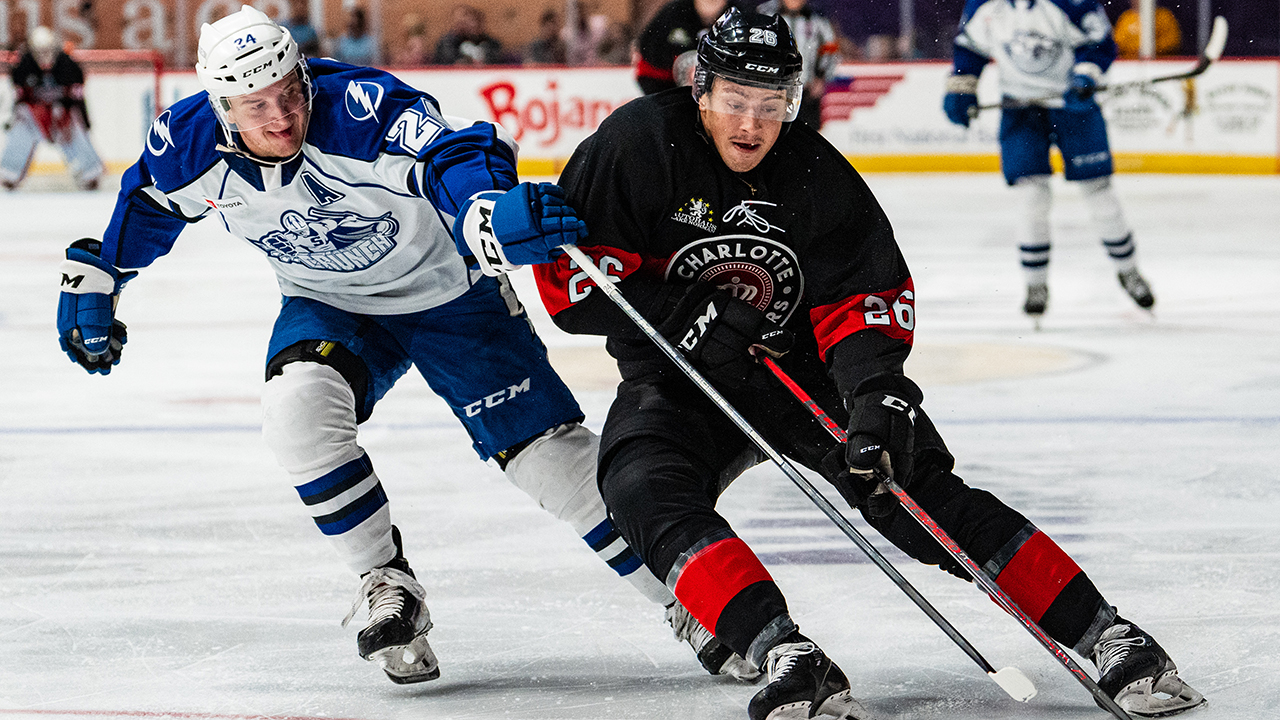 During the season, Checkers broadcaster TJ Chillot checks in with a weekly blog highlighting everything Checkers hockey. It was great to see the Checkers end their three-game winless streak on Friday night when they took down the Syracuse Crunch in front of a huge crowd at Bojangles Coliseum. It was the fifth consecutive win at home for the Checkers to start the season and it was clear to see that the team on the ice was feeding off the vibes put out by the fans. That said, there were plenty of story lines all weekend long, and I’m here to touch on a few that have been sticking out in my mind. Welcome back to In the Trapezoid with TJ.

Though the Checkers pulled out the win on Friday, they were less fortunate on Saturday when the Crunch blanked them 4-0. It was the first time the Checkers have been shutout since March of last season, and the first time they’ve come up empty at home since November 2021. Either way, a split series is a split series, and the Checkers are quite used to that scenario with the Crunch. If you look back at last season, the two teams split the season series 2-2, and each team went 1-1 at home.

Can we talk about the amazing jerseys that were worn to Friday night’s Checkers game? INCREDIBLE. I saw some NHL jerseys, college football jerseys, and even some obscure jerseys. I’m 99% sure I saw an Atlanta Thrashers jersey among the crowd. The best thing I saw? The handful of rare and unique Checkers jerseys. From the ECHL days, to the NASCAR night jerseys from years past, and even the one-off Pink In The Rink or other theme night jerseys. We’re too lucky with the fans we have!

For the second time this season, Zac Dalpe registered a two-goal night. Not only did he score the first goal of the game on Friday, he topped it by securing the victory for the Checkers with his second game-winning goal of the year. Dalpe isn’t showing any signs of slowing down and if the Checkers hope to be competitive late in the season, they’ll need their leader to keep doing what he’s always done.

Late in the game on Friday, with just a one-goal lead, the Checkers were ALL OVER the ice blocking shots. They took shots off shins, arms, and shoulders. Perhaps none was more selfless than Johnny Ludvig’s block in the final minutes. A cannon shot from a Crunch defender caught Ludvig in the face as he slid to make the block. The puck bloodied the ice and the defenseman, who was immediately assisted back to the locker room. Ludvig didn’t compete in Saturday night’s game after the injury, and though we don’t have a timetable for his return, he was a big piece to the Checkers blue-line and will be missed. As the cliche goes: “next man up!” and I fully expect the rest of the Checkers d-men to band together in his absence.

Don't Worry About The Score

When you look at Saturday night’s final of 4-0, you might be thinking right away that it was some kind of blowout. If you didn’t look at the box score, you’d be rational in thinking that. Those of us in attendance or who followed along on AHLtv or through the Checkers App know that it was a much closer game than the score suggested. The Crunch netted two goals in the second period to take the 2-0 lead, and though the Checkers out-shot the Crunch 10-9 in the third, they just couldn’t finish the job. Add in two empty-net goals from Syracuse in the final two minutes and you get the gaudy 4-0 final score, despite the game being much, much closer.

Amp Up The Power

Once again, the Checkers power play was on display for fans at the Boplex. The Checkers converted 50% of their chances on Friday night and it was a large part of their win. The first two goals of the game for Charlotte came with the man-advantage and overall this season, the Checkers have an insane 31.8% power-play efficiency while at home.

We say this every year it seems, but man, the Atlantic is a tough division! The Checkers are currently in fourth place with 12 standings points after registering at least a point in all but TWO of their first nine games. Though it’s pretty congested at the top to the point where a sweep could easily get you into a tough spot, it’s still crazy to see how hot this division started. Only seven standings points separate the sixth place Springfield Thunderbirds and the Providence Bruins in first.

That’s what the Checkers have to look forward to as their next SIX games are on the road. It’s a particularly grueling road trip because not only is it their second longest of the season in terms of duration (made even harder after starting the year 0-1-1-1 on the road), but there’s a lot of back-and-forth travel. It opens on the road against Providence this Friday night, only to travel 85 miles west to Hartford for the fourth game of the year against the Wolf Pack on Saturday. That’s not the end of their weekend, either, as they cap off a three-in-three by going BACK to Providence for a Sunday afternoon game. They’ll depart Providence after the game and ride back on over to Hartford where they’ll spend a few days practicing and getting ready for the second game of the week, their fifth overall in the early part of the season, against the Wolf Pack on Wednesday. It’s all capped off the following weekend with a Friday game Bridgeport before heading to Massachusetts for a battle with the Thunderbirds on Saturday. In total, they’ll play four teams, travel 389 miles between games, and play in six contests over nine days. That’s not even counting the plane flights to New England and back home following the trip.

After that LONG road-trip, the Checkers get to enjoy a lengthy stay at home and it all comes at us during the week of Thanksgiving. Great things are planned for the showdowns with Wilkes-Barre/Scranton and Utica! Take a look here at the promo schedule.

So much coming up, so much going on! Can’t wait to see you all at the Boplex in a few weeks! In the meantime, follow along with the Checkers on all our social media pages and the Charlotte Checkers app! Be well friends!