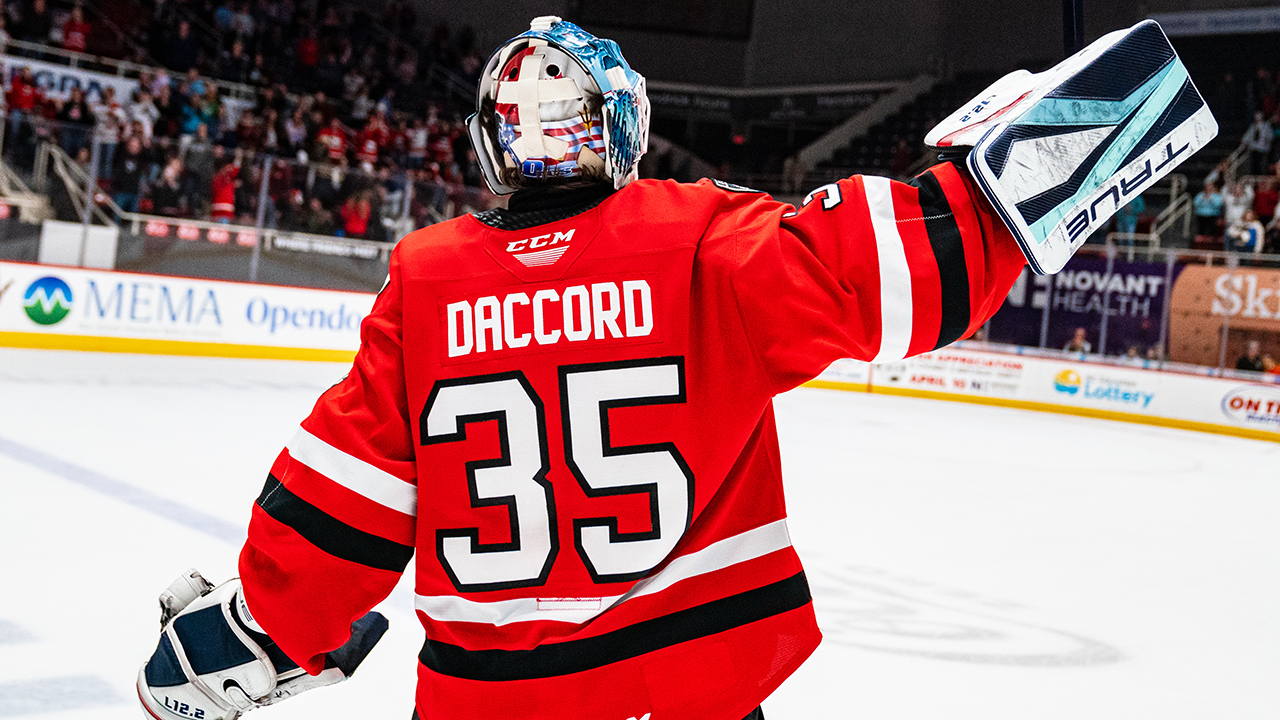 Despite beginning his pro career at the end of the 2018-19 season, Joey Daccord entered this campaign with just 47 games under his belt and a clear mission for the year.

“I’m in my third pro year but because of COVID and stuff I haven’t played a ton of hockey,” he said in November. “So I just want to keep playing, keep developing and get more experience.”

After taking the reins between the pipes this season, you could say he accomplished that mission.

“To play as much as I did and to have the belief from the coaching staff and the team that they wanted me out there was awesome,” said Daccord. “I played a ton of games and that’s really what I wanted out of the season, just to get a lot of minutes and play a lot of games.”

Daccord finished the year with a team-leading 34 appearances and over 1,900 minutes in the crease - hitting the ice for 20 of Charlotte’s final 34 games and 13 of the final 20 contests.

It wasn’t just about the quantity of his play though, as Daccord emerged as a force in the crease for Charlotte. The netminder posted the highest save percentage in the franchise’s history at .925 - a mark that tied him for second in the AHL overall - and the second-best goals-against average. In fact, of the 34 games that Daccord appeared in, he allowed less than three goals in 20 of them - including 11 of his last 15 outings.

“For them to have that belief in me and roll me out there night after night, it was awesome,” said Daccord. “I feel like between myself and the D and the forwards, we all developed such chemistry in all facets of the game. We really came together as a group and it showed - especially in the second half of the year when we really took off.”

Taken in the expansion draft last summer, Daccord was part of the Seattle contingent on the Checkers’ dual affiliation, but was a key player in the melding of the two organizations.

“I think when you look at where we started this year - coming from all different places and different organizations, we’ve come a long way,” said Daccord. “It’s been pretty special to be a part of this group and come together. Some of these guys are my best friends and a lot of them are going to be close friends for a long time.”

“He gives the group a lot of confidence and guys love playing in front of him,” said Head Coach Geordie Kinnear after a game earlier this season.

Despite coming into this season knowing Charlotte is just a temporary stop (Daccord is under contract with the Kraken through next season), the netminder formed a strong bond with a Checkers fan base that immediately embraced him.

“This is the most fun I’ve had playing for a fan base at the AHL level,” said Daccord. “They’ve been so supportive of us and me and I feel like I’ve made a genuine connection with the fans here this year. I just want to thank them for the unwavering support. Wins or losses, ups or downs, they were always supportive.”

Daccord’s stellar play in net wasn’t the only entertainment he offered fans in attendance, as the crowd would often stick around to see if the netminder was named one of the Three Stars of the Game - in which case he would take the opportunity in his curtain call to pump up the raucous building.

“Anytime I got the chance to go out there and be a star of the game and interact with them was awesome,” said Daccord. “They made me feel so loved and appreciated and that was super special.”

“He brings a lot of swagger to the group,” said Kinnear.

Daccord made five appearances for the Kraken across this season, and now has his sights set on cracking the lineup for year two of their club. Whether he is there in Seattle or with their new AHL affiliate in Coachella Valley, rest assured that his focus will be on the game in front of him - a mindset that he honed over his year in Charlotte.

“Any time you’re in the American League the ultimate goal is to get called up, right?” said Daccord. “It’s weird because there’s two simultaneous goals - you want to get called up and make it to the NHL and you’re trying to win here. So it can be an interesting dynamic, but you just try to manage it the best you can. When you’re here, you’re focusing only on here. That’s all you can control, doing your best here.”

The summer blueprint for Daccord is a simple one.

“Just continued improvement,” he said. “I think everybody is happy with how much I played. I’m really happy with how our season went. I think just keep getting better and developing all facets of my game.”

Wherever his career takes him from here, the impact that his season in the Queen City had on Daccord remains.

“Although I won’t be back next year, Charlotte will always hold a special place in my heart,” said Daccord.