Kichton Primed For Big Year With Fresh Start In Charlotte 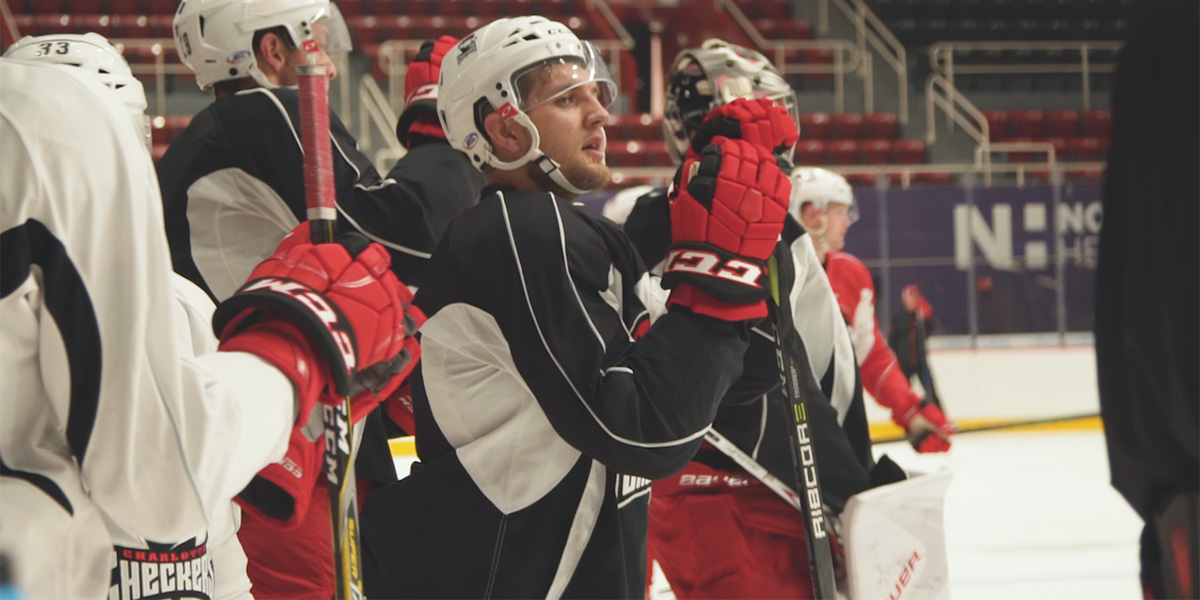 The Checkers’ blue line down the stretch of last season was a strong, consistence presence in the team’s push toward a postseason berth. While nearly all of that group is slated to return this season, the addition of a new weapon could push the defensive corps over the top.

Brenden Kichton has established himself as a dangerous asset on the ice during his young career. In four AHL seasons within the Winnipeg system, the 25-year-old has racked up 141 points, ranking in the top two among his team’s blueliners in scoring each campaign and leading the Moose overall in 2015-16.

But Kichton has now moved on from the Jets organization, seeking a fresh start with a new club for the first time in his career.

“I’m excited for a new chapter,” said Kichton. “Sometimes you get to a spot and you get a little complacent and stuff like that. I’m new here and no one really knows me so I’ve got to make a good impression and keep that going throughout the season.”

The defenseman’s offensive production has come in waves over his tenure in the pros. Kichton started off on a high note with 10 goals and 48 points as a rookie in 2013-14, earning a trip to the AHL All-Star Game and a spot on the league’s All-Rookie team. His numbers took a dip as a sophomore, putting up eight goals and 29 points, but the following campaign saw another rise with a career-best 11 goals and 41 points. Then there was last season, which saw Kichton record one goal and 22 points in his final year with Manitoba.

While even his lower outputs remain solid – last year’s 23-points effort would have ranked third among Charlotte blueliners – Kichton’s aim is to return to those high points and stay consistent.

“Staying healthy is one of the biggest things,” said Kichton of the key moving forward. “Last year I wasn’t healthy for three-quarters of the year. I feel good here, I feel like it’s going to be a great situation for me.”

If fully unlocking Kichton’s potential firepower is the end goal, the move to Charlotte is a definite positive. The blueliner’s skill set lends itself extremely well to what the Checkers are aiming to do this season as a whole.

“I think the system here is more conducive to my play,” said Kichton. “Whereas in Winnipeg it was more of a dump and chase style, here there’s a little more possession which is big for me because I like to jump in on the rush and be that fourth guy coming in. I think the system fits me really well.”

“This is much more wide-open for him and his game,” said assistant coach/video Myles Fee. “Here we want our guys up and we want them mobile. We preach getting that fourth man up the ice.”

After a stint in NHL camp with the Hurricanes, Kichton is ready to use these next two weeks to get familiar with his new squad and ramp up for his fresh start.

“Just getting my timing down,” said Kichton of his main focus for the rest of camp. “Make sure I’m doing the right things and getting pucks to the net and keeping those passes nice and crisp. I think it’s going to be a big year.”