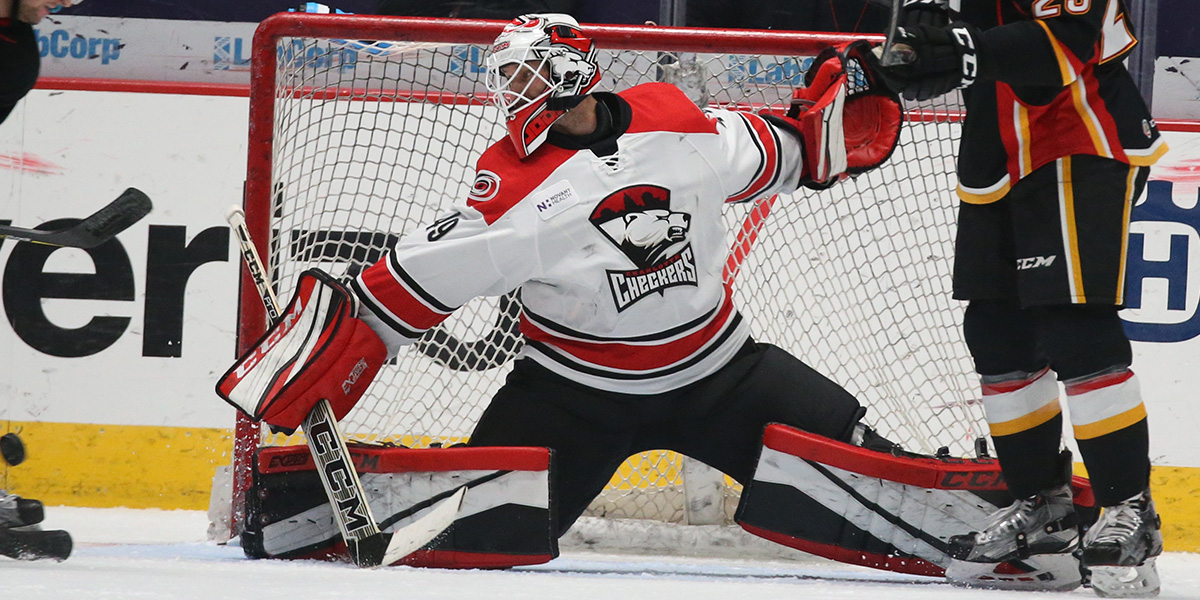 Michael Leighton has been around the game of hockey for quite a while, picking up a wide array of experiences along the way. But even so, his 2016-17 campaign ended up being unique in its own right.

Leighton’s season could be split into three distinct segments. The first was his time as the Checkers’ workhorse, turning in impressive numbers to start the season and even earning himself the fifth All-Star selection of his decorated career.

Then came the injury to Eddie Lack. With their number two netminder sidelined, the Hurricanes brought Leighton up to serve as Cam Ward’s backup in the meantime.

This wasn’t uncharted territory for Leighton, as he had carved out a large chunk of his playing career as an NHL backup. But as Lack’s recovery time continued to stretch out, Carolina turned to the 36-year-old to spell Ward. Leighton made three starts for the Hurricanes and appeared in another game in relief, even picking up his first NHL win since 2010 along the way.

“It’s been awhile since I’ve gotten to play in the NHL and start a game, that was probably the first one in three or four years,” said Leighton. “It was good to get in there and prove myself that I still can play in that league. It’s a great organization and a good group of guys up there, so it was nice to just be up there and be a part of it.”

Once Lack was fully recovered, Leighton made the full-time jump back to Charlotte (he had come in and played for the Checkers sporadically during his time in the NHL). He took back command of the crease, starting five consecutive games before his season took another turn, this time due to an injury of his own.

Knocked out of Charlotte’s game on Feb. 17 with a knee injury, Leighton was forced to the sideline for the next two months, where he would remain until the end of the regular season.

“It was tough just waiting around for it to heal,” said Leighton. “It wasn’t going as planned so then I had to get surgery, and then the hardest part from there was the waiting game.”

Finally cleared to get back on the ice, Leighton began the tough process of getting game-ready.

“It felt good just to get on the ice,” he said. “I think the first time the team was on a week-long road trip, so there was only a couple of guys shooting on me. So that was kind of tough, it would have been nice to have the team here and go out and take lots of shots with all the guys. But it felt good to just get on the ice and move around and see some pucks again. I felt that once I started getting better and getting back on the ice I started progressing more quickly.”

An interesting twist in Leighton’s journey back was the fact that the team was in the midst of a jaw-dropping run to the playoffs, powered by the play of the freshly acquired netminder Tom McCollum.

It may seem like a strange situation for the veteran Leighton to be working back while another goalie took the reins, but that wasn’t the case at all.

“It was great to see,” said Leighton. “When Tom came he definitely helped the team make the playoffs, he was pretty much the main part that did that. Hats off to him. I even thanked him after the last game and told him that we wouldn’t have even been in the playoffs if it hadn’t been for him. It was great to have a veteran guy like him. He’s a great goalie and a great guy.”

Leighton’s road to recovery reached its end in the postseason, when the netminder was cleared for game action and served as McCollum’s backup for the first four games of the Checkers’ first-round series against Chicago. In the decisive Game 5, however, two quick goals led head coach Ulf Samuelsson to pull out all the stops, replacing McCollum with Leighton.

In an early hole in an elimination game is probably not the ideal scenario to see your first game action in over two months, but if anybody had the wherewithal to do it, it would be Leighton.

“I’ve done that before, I’ve jumped into an NHL playoff game like that,” he said. “But yeah it was strange. You can practice as much as you want but jumping into a game and being in game shape is so different. I was definitely tired after the game and I didn’t even get that much work. To get a few games under your belt before would have definitely helped, but considering the fact that I did get a lot of practice time over the last two or three weeks leading into the playoffs, it was good to get into a game. Not the position we wanted to be in, though, it was a tough loss.”

That appearance was obviously Leighton’s last of the season, but after all he went through during the year, he’s ready to move on and do it again. After a bit of rest, of course.

“Just heal the body up and make sure my knee is 100 percent,” said Leighton. “I’m going to take a couple weeks off and enjoy the family and then start working out and looking for a job.”