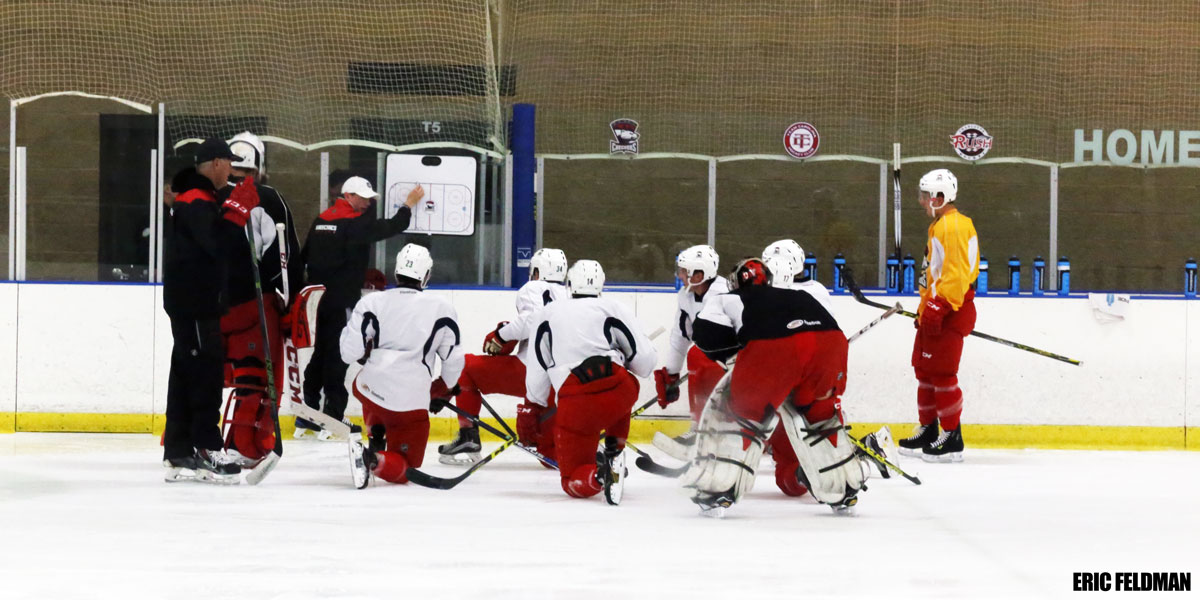 When the Checkers took the ice earlier this week for training camp, there was a new face that stood out, showcasing quick speed and top notch stickhandling.

That new face wasn’t a player, however. It was the newest addition to the coaching staff.

Mark Metzger debuted this week as the skating and technical skills coach for Charlotte. While the Checkers have had a power skating coach in the recent past, Metzger’s role takes that position and expands upon it.

“Usually a player at this level needs to be quicker but he also needs to increase his skill,” said head coach Ulf Samuelsson. “It comes down to the quick passing and the small turns and the puck control. So [Metzger] can manage that whole department.”

“All pure development,” said Metzger when asked to define his role. “Whether it’s puck protection, battling, skating, hockey IQ, it’s all just situational awareness. We’re trying to help guys get to the next level.”

A native of Buffalo, Metzger has made a name for himself through player development after his playing career ended prematurely.

“I played major junior when I was 17, played preseason, got some college offers, but I got hurt,” said Metzger. “So I just started getting into player development. I started with one student and today back home with my business, Precision Hockey, we’ve trained over 5,000 students from NHL to AHL to OHL to youth.”

Employing specific coaches for the purpose of developing skill is something new for many teams, but the need for it is evident.

“You look at the NHL and teams like Chicago, Pittsburgh, Detroit, all these powerhouse are really focusing on player development,” said Metzger. “I think it’s a crucial step. The game is constantly changing and we as coaches and organizations have to find ways to change and adapt to help players get to the next level.”

The added emphasis is not lost on the players who have spent the week with Metzger at training camp.

“Just to have that with Mark and how skillful he is, whatever he’s talking about, we’re all listening,” said rookie defenseman Josh Wesley. “He’s an incredible skater and stickhandler, so any advice he has we just try to take in. We all should be taking advantage of having him here.”

Metzger isn’t the only new face, as an entirely revamped coaching staff took the ice in Charlotte for the first time this week, with assistant coach Peter Andersson helping Samuelsson run the practices and video coach Myles Fee partaking in an on-ice session for the first day.

It may be early on, but things are running smoothly for Samuelsson and his crew, something that should help the team as they move forward toward the start of the season.

“The staff is very important,” said Samuelsson. “It’s a game of managing small details nowadays. You need everyone to be functional and you need your whole staff to be very effective. I’m really happy with the way that everyone has been so far.”

Some other news and notes from today's practice:

Unlike last season, the Checkers will have a two-game preseason slate this weekend to prepare for the regular season to kick off. The team will travel to Lehigh Valley for contests tomorrow and Saturday night against the Phantoms.

After a week spent at the practice rink, these preseason tilts should ratchet up the intensity a bit.

“You work on things at a little higher pace and with a little more pressure in a game,” said Samuelsson. “It’s the next step up for us to get ready for the regular season.”

The biggest decision for Samuelsson will be how to construct his lineup for the games.

“The way it looks now, there’s going to be quite a few players who we won’t have access to,” said Samuelsson. “[The Hurricanes] want to keep a few more players than we expected for practice purposes. So that’ll give some guys the ice time that they wouldn’t normally see. It’s a good chance for our younger players and some of the new players to show us what they can do.”

For any curious fans looking for a broadcast of the preseason contests, an audio stream for both Friday and Saturday's games can be found on the iHeartRadio app.

According to the Sault Star, defenseman Tyler Ganly will be sidelined for three-to-four months after undergoing surgery on his shoulder. The second-year pro suffered the injury during the Hurricanes intrasquad Red-White game at the start of training camp. Ganly split his rookie year between Charlotte and Florida, giving the Checkers some depth on their blue line.