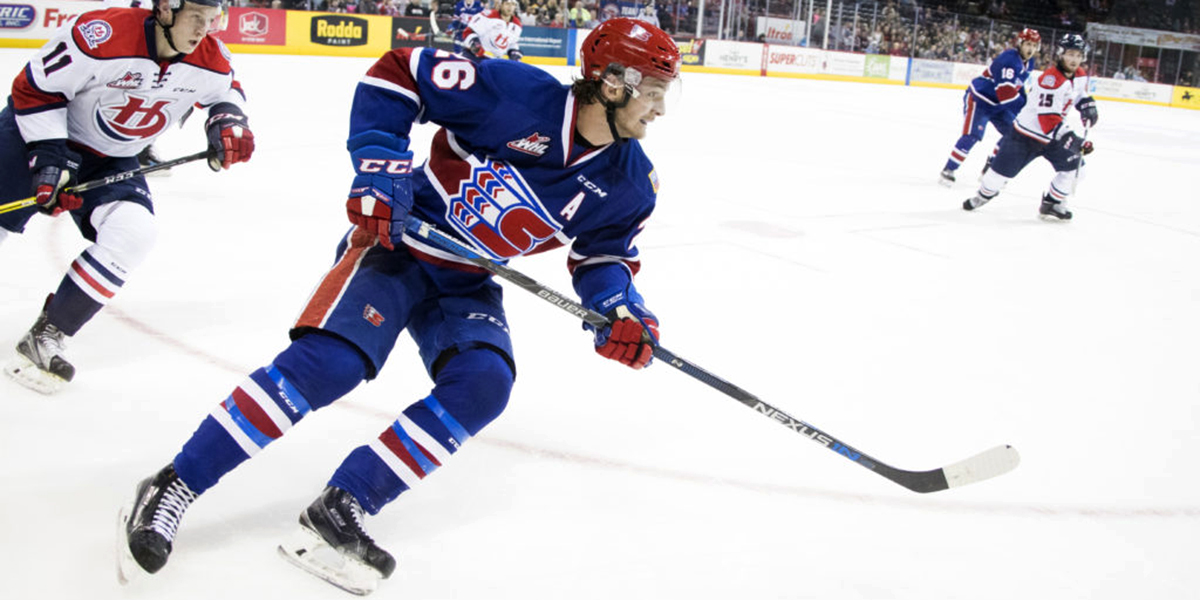 It’s that time in the AHL season once again when prospects from the junior ranks come on board to get a taste of the pro game.

For the Checkers, the first player to make that leap this year is Hudson Elynuik.

Drafted by Carolina in the third round of last year’s draft, Elynuik’s WHL season came to an end last week when his Spokane Chiefs failed to make the playoffs. Shortly after that, the 19-year-old jetted to Charlotte to get a taste of the pro game.

“It’s been good,” said Elynuik of his time in Charlotte. “I got here Tuesday right before the game so I’ve been able to watch a couple games and see how the game is played at the pro level. It’s been fun being here.”

The forward came on board at a busy time, with the Checkers entrenched in a six-games-in-10-days stretch, but Friday morning marked the full team practice that he’s taken part in.

“I’ve talked to him and we’ve done some thorough testing with him,” said head coach Ulf Samuelsson. “He’ll get to see the environment here and participate in a couple of practices. It’s a good experience for him.”

The practice of brining younger prospects up to the AHL club for the end of the regular season is a long-standing tradition, helping prepare players for the next level. The coaching staff has a similar plan for Elynuik during his time with the team.

“We’re hoping it’s a good experience for him,” said Samuelsson. “He can see the pace of play and how serious guys are preparing and getting ready for every day here in the pro life.”

Though he hasn’t been here long, Elynuik has already seen several key differences going from junior to the pros.

“Just the way the pros treat themselves, with all the extra work that they do,” he said of the biggest thing that has stood out so far. “Rolling out, stretching, staying out after practice, that kind of stuff. They all work really hard and it’s definitely making an impact on me.”

Given where the Checkers’ roster stands currently, plus a few more bodies possibly on their way back from injury, whether Elynuik will see game action during his stint in Charlotte remains to be seen. Samuelsson remarked that it was ‘hard to say” whether the young forward would debut this year, but that’s not going to stop Elynuik from putting in the work.

“I’m hoping for the best,” said Elynuik. “I really hope I get into a game, I love to play and try to win and do as much as I can for the team, so that would be great. But it’s going to be a good learning experience. Coming here is going to be great for my development and I’m really excited about it.”

The physically imposing forward, who stands at a staggering six-foot-five, will turn 20 in October, making him eligible to play in the AHL with Charlotte next season. That path isn’t a foregone conclusion at this point, however, as he could also return to the WHL for his over-age season with the Chiefs.

“Yeah there’s still some decisions to be made there,” said Elynuik on whether he will turn pro next year. “It’s what Carolina sees best for my development. It all comes down to that.”

Regardless of what the future holds, the next few weeks with Charlotte should be a positive boost for the young prospect.

“I talked to [Carolina GM Ron Francis] a bit when I got here and we had a good conversation,” said Elynuik. “We’re really excited that I can come here and see what it’s all about and see how it goes moving forward.”

The Checkers’ roster this week featured a new face making a homecoming to the Queen City. You probably wouldn’t have guessed that it was the native Swede who played college hockey in Michigan and currently stars for an ECHL team in Texas though.

“Yeah my wife went to law school at Wake Forest so we spent a couple summers here in Charlotte when she was doing internships,” said Greger Hanson, who signed a PTO with the Checkers earlier this week. “I love this city. It’s a beautiful city full of great people. I’m just really happy to be back here.”

The Checkers have been fairly lucky this season in keeping a roster intact, rarely having to go the PTO route to fill holes. But this week saw the nature of the game catch up to them, and key injuries forced the team to bring in some outside help.

“Management was looking hard to find a player because we didn’t have enough players, and they found Hanson,” said Samuelsson. “He’s done well so far.”

The 29-year-old forward stepped right into the lineup on the makeshift fourth line with Mitchell Heard and Tyler Ganly and made an immediate impact, allowing the coaching staff to lean on them.

“You just come in and take the role you’re given,” said Hanson. “We won two games so it was unbelievable, the team played really well. It was two really big games for us, so it was a lot of fun and I learned a lot as a player.”

In his sixth pro season, Hanson has established himself as an elite offensive force in the ECHL. The forward led the two-time defending Kelly Cup champion Allen Americans in goals at the time of his joining Charlotte and has logged over a point per game at that level (170 points in 145 games).

Still, history has shown that ECHL scorers don’t always translate to the next level. Hanson seems to have avoided that trap, however, stepping into a fourth line role and thriving, delivering several big hits while getting into the dirty areas of the ice during his two games with the Checkers.

“That’s something that I’ve learned to do,” said Hanson. “There’s so many good players here that you’re not just going to go up and get a scoring role. You have to come in and do the little things and play physical. I think that’s something that I have in my repertoire that maybe some other scorers don’t. I really like the physical game and that fourth line roles fits me.”

As he was with Elynuik, Samuelsson was non-committal as to what will happen with Hanson going forward into the weekend.

“There’s a lot of players that are borderline right now so that’s a tough one to predict,” said Samuelsson on whether Hanson will play this weekend. “But he’s certainly a good player to have around if we need him.”

Hanson is no stranger to the situation, with this being his fourth AHL PTO of the season, but he’s going to continue to put the work in while he waits on another shot.

“You just prepare like you’re going to play,” said Hanson. “I’ve been around so I’ve seen that guys are coming back from injuries and all that stuff, so you just prepare to play and if you don’t that’s fine. You just stay ready and wait for your number to be called.”

A big part of the Checkers’ recent run of success has been the play between the pipes of newcomer Tom McCollum. The veteran netminder, acquired from Stockton at the trade deadline, has started each of the team’s last five contests and earned the victory in each one. He’s surrendered just eight total goals over that stretch, including a shutout in the first game of Charlotte’s pivotal sweep of Iowa earlier this week.

After being relegated to third goalie status in Stockton for the majority of the season, McCollum has jumped full-force back into a number one job.

“It’s definitely something I’ve done before, but I’ve never gone with that long of a break and then had to turn around and play all the time,” said McCollum. “The coaches have done a great job of managing our practice time to help us conserve our energy, and fortunately I’ve got Michael Leighton still here because he’s a guy that’s been through it a lot and he’s a great guy to lean on and learn from.”

With Leighton absent from the lineup for large chunks of time either due to injury or recall, the Checkers have struggled to get consistent goaltending for much of this season. That’s changed with the addition of McCollum, and there’s been a positive impact across the board.

“It really helps,” said Samuelsson of consistently strong play of McCollum. “It helps the way he moves the puck and has a calm demeanor. He’s the kind of player where we may make a mistake, but the goalie is going to save our butt. It makes a huge difference.”