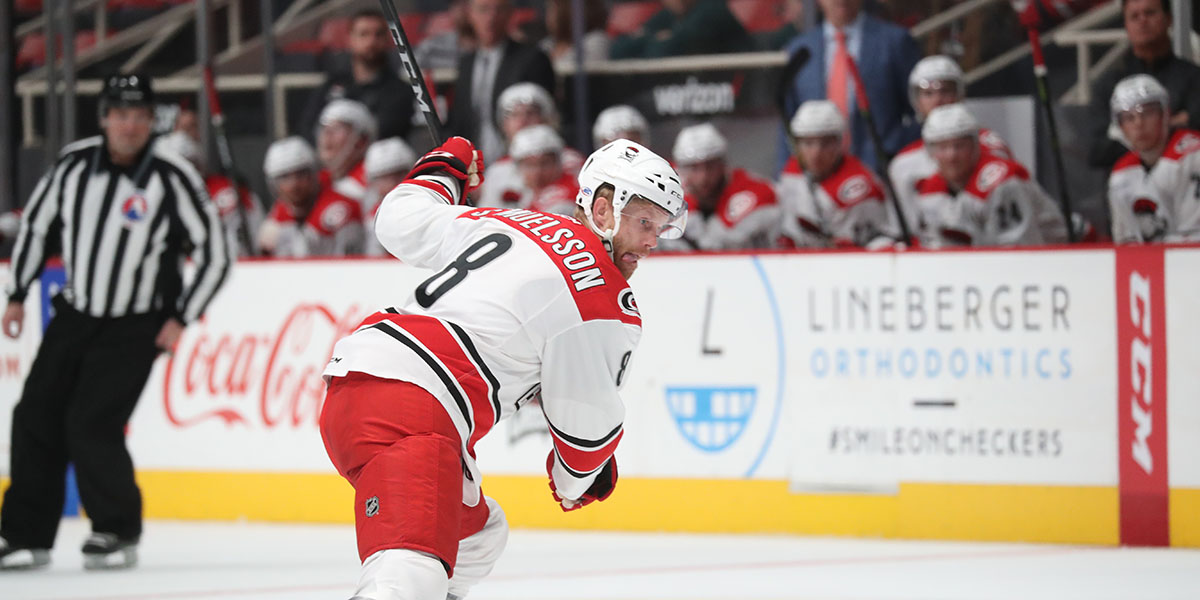 Last season Philip Samuelsson was a late addition that sparked the Checkers and helped propel the team to a playoff berth. This season he is a cornerstone on Charlotte’s blue line, pushing for the same end result.

Samuelsson joined the team at last February, heading over from the Montreal system in exchange for fan favorite and longtime Checker Keegan Lowe. Despite not having a ton of time to get acclimated to his new environment, the blueliner thrived and became a key piece of Charlotte’s red-hot run down the stretch.

While Samuelsson was originally just here for that small chunk of the season before heading into free agency, the Hurricanes obviously saw something in the Swedish defenseman, inking him to a deal and sealing his return to Charlotte. Now through the first two months of the season with a new head coach after playing for his father, Ulf Samuelsson, last season, the younger Samuelsson is proving last year’s success was no fluke.

“It’s familiarity,” said Samuelsson. “I’m comfortable with the system. We’re playing the same system as we did last year even though we have [head coach] Mike [Vellucci] taking over now. Anytime you’re comfortable on the ice it will show in your play.”

“I think it’s confidence,” said assistant coach Peter Andersson, who runs the team’s defense. “He got time to play here last year and we were playing good. You could see his confidence growing last year and it’s kept going from there. That and his skating has gotten better, I know he has been working on that this summer. He gets down to the puck quicker and has more time to get better passes up to the forwards.”

Samuelsson is a part of a Charlotte defensive corps that is largely the same from a season ago, with six of the eight blue liners on the current roster returning from last year. While the Checkers have seen an influx of new faces up front this season, the consistency on the back end has helped players like Samuelsson settle into their own.

“It’s huge,” said Samuelsson. “Anytime you get to play a bunch of consecutive games with a guy you start to really figure out how they play and all their little nuances. Me and Rollie [Roland McKeown] have played together most of this year and we’ve kind of grown together as a pair and I think we’ve done a good job out there, we’ve been playing against some top lines. The next thing for us to just start contributing more offensively.”

As he referenced, the Checkers have leaned on the duo of Samuelsson and McKeown heavily this season to help contain some of the high-flying offensive talent that their opponents trot out. They have been largely successful in that aspect, helping Charlotte rank 11th in the league in terms of goals-against per game, but also in helping out on the other side of the rink. Samuelsson and McKeown have the two best plus/minus marks on the team, with the former ranking as one of the best in the league, especially among defensemen.

“We’re just trying to get the puck to the net,” said Samuelsson. “When we have chances to get it down there we’re getting it down there to the guys who are big and strong in front of the net. The main thing for us in the neutral zone is to move it quick. I think anytime you can do that and get the puck into our speedsters’ hands they can take it from there.”

“He has a good shot and he’s a good passer from his own end,” said Andersson. “That makes it easier for the forwards to go and create those scoring chances.”

The 26-year-old mentioned wanting to bump up his offensive production moving forward, as he currently sits with a solid 10 points (3g, 7a) in 23 games. Last season Samuelsson hit a wall in St. John’s, totaling just five points in 40 games with the IceCaps before getting reinvigorated in Charlotte for 14 points in 25 games. While he’s not far off that pace this season and excelling in other areas, it’s hard to watch his game and not think the points will start dropping soon.

“It’s always nice to have your defensemen scoring,” said Andersson. “But lately here he and McKeown have been playing against the other team’s top line, so you probably don’t get so much scoring there. Of course, he’s good with the puck and he has a good shot so he’s probably going to get you some points here as the season goes.”

For now, Samuelsson continues to anchor what has proven to be a strong corps of blue liners.

“He’s been around and he’s a big fighter,” said Andersson. “It’s nice to have back there. It’s nice for the young kids to see that if you fight hard you’ll do well."