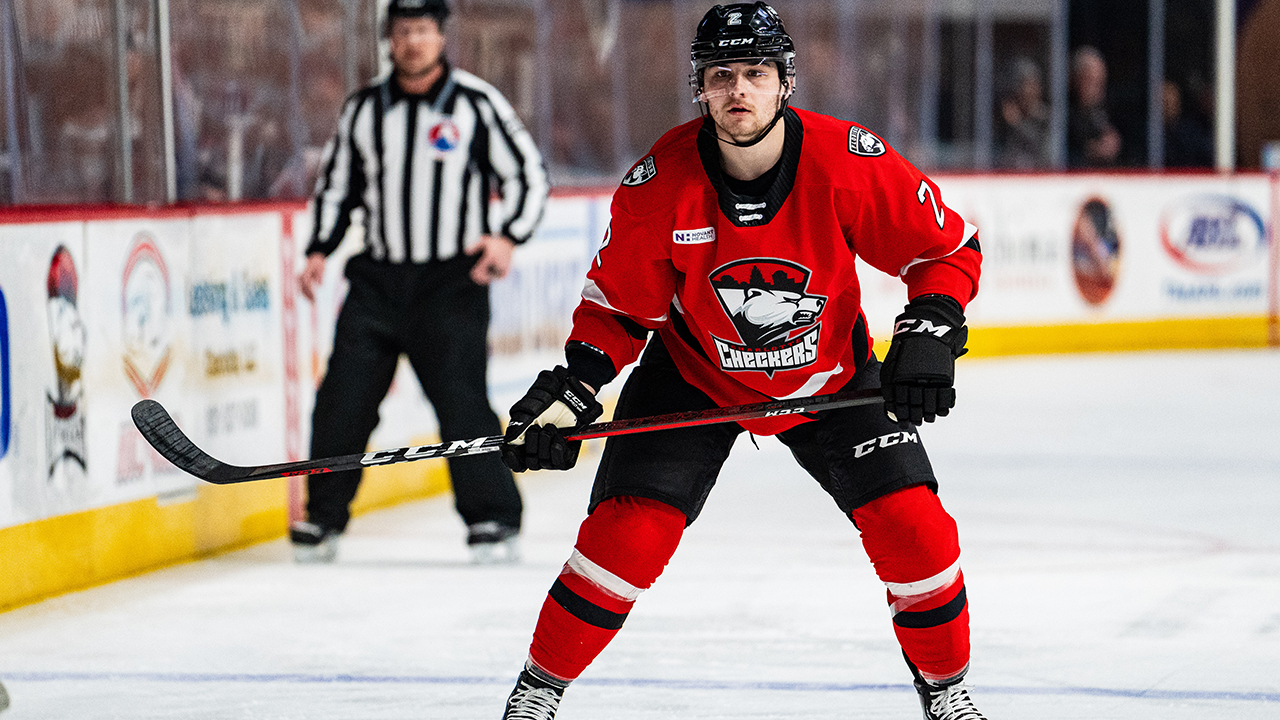 The new hockey season is quickly approaching, and one of the first steps towards the new campaign comes this weekend.

After kicking off rookie camp in Florida on Wednesday, the Panthers will be taking their team of prospects to Raleigh on Friday and competing in the Prospect Showcase - a four-day event hosted by Carolina that will pit Florida’s squad against the Hurricanes, Lightning and Predators.

As we head into a busy weekend of hockey, let’s break down the roster and how it could impact the Checkers this season.

Florida’s prospect squad features some big names who could make a splash in Charlotte this season.

Justin Sourdif is one of the Panthers’ most highly touted prospects and is coming off a stellar final season in the WHL - where he racked up 71 points (26g, 45a) in 52 games and helped lead Edmonton to a league championship. A third-round pick in 2020, the 20-year-old forward is already making a strong impression as he prepares to join the pro ranks.

Blue liner Santtu Kinnunen is another Florida draft pick (7th round in 2018) looking to start things off on the right foot. At 23 he is the second-oldest skater on the Prospect Showcase roster and has significant pro experience under his belt - Kinnunen has spent the last four seasons playing in his native Finland’s Liiga and is coming off a season in which he led all Tappara defensemen in scoring. As he looks to make the leap across the pond, this showcase will be his introduction to the North American game.

Another defenseman coming over to the continent is Calle Sjalin, a 23-year-old Swede who signed a two-year, entry-level deal with the Panthers after a few big seasons in his native country’s top league.

While not drafted by Florida, Nathan Staios and Mack Guzda were two big undrafted free agent gets by the Panthers that will take the ice in Raleigh. Staios was a standout on the blue line over his OHL career - earning the OHL’s Most Outstanding Defenseman Award this past season and leading Hamilton to a league title - while Guzda wrapped up his junior career by finishing third in goals-against average and second in save percentage last season starring for Owen Sound and Barrie.

For all four, this showcase will act as a vehicle to ramp their games up heading into NHL training camp - where they’ll look to claim a spot amongst a stacked Florida lineup. Should they end up in Charlotte, this showcase could be a glimpse at how these young, high-end weapons could impact the Checkers’ attack.

The Panthers’ roster for the weekend is heavy on younger prospects who are either preparing to enter the pro game or are still a year or two away from that point, but there are a few names that Checkers fans will recognize. Patrick Giles (10 games played), Dennis Cesana (8 gp) and Zach Uens (6 gp) all suited up for Charlotte late last season after their respective college seasons had finished, with Giles also appearing in all seven contests during the Checkers’ playoff run. After getting thrown straight into the pro ranks, all three will now prepare to ramp up and embark on their proper rookie campaigns - Giles and Cesana are on AHL contracts, while Uens is entering year one of his entry-level deal.

Speaking of AHL contracts, this weekend will be the first look at a contingent of young skaters who inked deals over the summer with Florida. Along with Giles and Cesana, four other members of the prospect team are under AHL contracts - Riley Bezeau, Robert Calisiti, Xavier Cormier and Ethan Keppen. All four are coming off strong junior careers - including a Memorial Cup championship for Bezeau’s Saint John team - while Calisti (one game with Belleville) and Keppen (18 games with Utica and Abbotsford) have gotten a taste of the pro game during stints over the last two seasons.

This Prospect Showcase will give these rookies a chance to cast their first impressions on the Checkers coaching staff before they come to the Queen City and battle for a spot during AHL training camp, which should kick off shortly after.

ROUNDING OUT THE ROSTER

The rest of Florida’s group is comprised of players less likely to make appearances in Charlotte this season, though that’s no reason to ignore them.

Younger draft picks like Sandis Vilmanis (5th round in 2022), Marek Alscher (3rd round in 2022) and Josh Davies (6th round in 2022) could be impact players for the Checkers further down the road in their development - while invites like Tag Bertuzzi (112 points in 191 career OHL games), Ethan Burroughs (tied for the team lead on Owen Sound last season with 30 goals) and Beau Jelsma (47 points in 68 games during his first OHL season) could impress enough over the weekend to warrant a second look in the future as roster needs emerge.

The tournament runs from Friday to Monday, with the Panthers schedule available here. All the games will be streamed on the Hurricanes' web site.