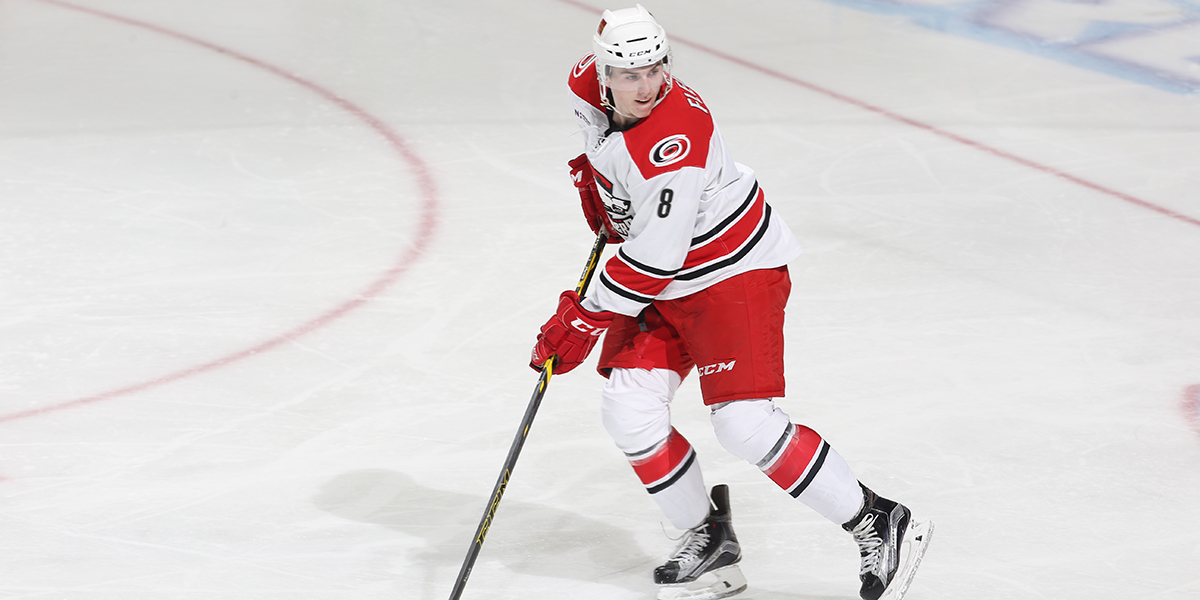 Three days before the start of the 2016-17 season, the Checkers roster saw a big shakeup.

The first move was the assignment of three top prospects – Lucas Wallmark, Trevor Carrick and Haydn Fleury – from Carolina to Charlotte. Carrick returns after turning in consecutive seasons as the Checkers’ top performing defenseman, while Wallmark prepares to begin his first North American season after excelling in the top Swedish league.

Perhaps the most intriguing addition of the trio is Fleury. The seventh overall pick in the 2014 NHL Draft, Fleury start his rookie campaign in Charlotte after an extended look with Carolina.

“I learned a lot from all the guys up there,” said Fleury. “You know why they’re up there, the intensity and the way they carry themselves. I just need to work on those things here.”

After five seasons starring for the WHL’s Red Deer Rebels, the 20-year-old is making the full-time leap to pro hockey. Fleury appeared in one game for the Checkers two seasons ago on an ATO and lit the lamp, and will be looking to keep that ball rolling.

“I’m a two-way defenseman,” said Fleury. “I like to play in the offensive zone and I like to have the puck and make plays and then use my skating ability to defend guys, play physical and play in the defensive zone as little as possible.”

As one of the organization’s top prospects, Fleury has a strong familiarity with his new home, something that should help the transition.

“I know most of the guys from past camps with Carolina and the guys that I don’t know were very welcoming and introduced themselves,” said Fleury. “It’s a good group of guys down here.”

Later in the afternoon, the Hurricanes made waves by acquiring Connor Brickley from the Panthers in exchange for longtime Checker Brody Sutter.

While Sutter has been a solid piece for Charlotte over the past few seasons, the addition of Brickley, a second-round pick in 2010, is a positive one.

“He’s going to add some speed and compete level,” said head coach Ulf Samuelsson of Brickley. “He’s put up points before at this level, so we’re really excited about him.”

As Samuelsson mentioned, the 24-year-old has proven to be a scorer in the AHL, including ranking second on San Antonio in scoring two seasons ago as a rookie. Brickley’s offensive flair will be a welcome addition to Charlotte’s arsenal.

“I like to play fast paced hockey, get down on the forecheck and play hard,” said Brickley. “I like to contribute on the offensive side as much as I can.”

While he acknowledges that joining a new team just days before the season starts is a challenge, Brickley is fully ready to contribute.

“Going through training camp [with Florida and Springfield] has me ready for the season,” said Brickley. “The challenging part will be getting some chemistry with my linemates. But the guys and the coaches have been really open and forthcoming. So it’s been a good experience so far.”

Shortly after the trade happened, the Checkers announced they would be inking longtime Hurricane Patrick Dwyer to an AHL deal. The veteran forward isn’t expected to join the team until tomorrow, but the staff is eager to see what he can bring to the team.

“He has experience and he knows the system,” said Samuelsson. “He’s a good two-way player and he’s a player that we’re going to look to to be a good role model for our younger players.”

With that influx of players, the Checkers made another round of cuts this morning, sending Levko Koper and Kevin Raine to the Florida Everblades and releasing Brant Harris from his tryout.

Forward Mitchel Heard, who signed a two-way AHL deal with Charlotte over the summer, remains on the team, however.

“It’s definitely a good feeling,” said Heard. “I’m just taking it day by day, learning the systems and getting to know the coaches. I’m just trying to have some fun and work hard for that opportunity.”

Heard stands as the lone two-way contract or camp invite still on the team, a status that he has earned.

“He’s had a really good camp,” said Samuelsson. “He made himself noticeable out there. He’s got the speed to play at this level.”

A former second-round pick who is heading into his fourth pro season, Heard battled his way through camp strong enough to catch some eyes.

“I kind of strive off of being a hard-working guy,” said Heard. “I’m a two-way player and I use my skill when I can. Just trying to be a workhorse and catch the coaches’ eyes from that point of view and then hopefully my skill takes me from there.”

With the lineup now starting to become clearer, it’s now up to the 24-year-old to take advantage of his chance.

“I can be an energy guy, a good two-way player and good in the D zone,” said Heard. “I’m just looking for an opportunity, wherever it may be, whether it’s up the middle or the wing. Like I said, I’m just taking it day by day and earning my spot every chance I get.”

With the dust settling on the slew of roster moves over the last 24 hours, it’s now the coaching staff’s job to put together a winning group for Friday’s season opener in Texas, a task easier said than done.

“I’m not going to lie to you and say that’s it’s all going to come together in the first game in terms of chemistry,” said Samuelsson. “Some lines aren’t even put together yet.

“As much as the system has been taught, it’s now up to us to find the right players for the right roles. There’s definitely some work to get done before then. It may even take a few games into the season before you find out who fits well with who.”