Round Three Preview: Checkers vs Thunderbirds 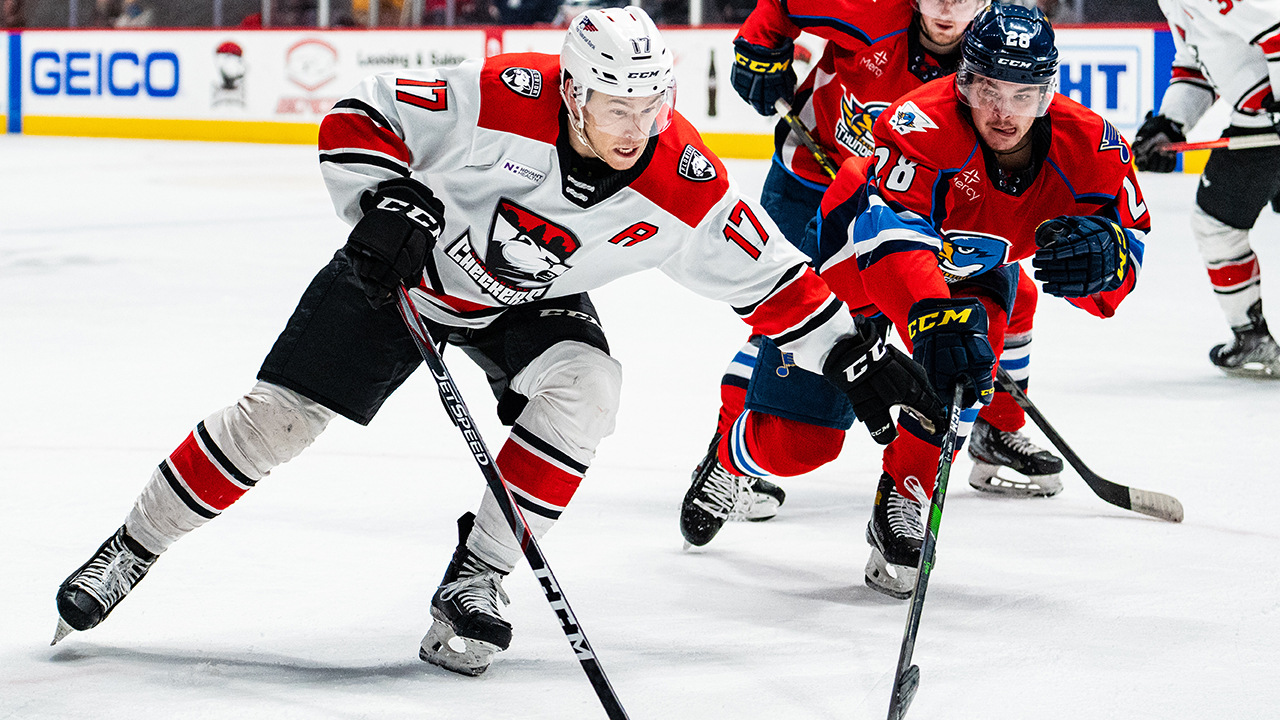 As the Checkers continue on to the third round of the Calder Cup Playoffs, let’s preview the Atlantic Division Finals against the Springfield Thunderbirds.

The Springfield Thunderbirds went 43-24-6-3 this season for a .625 points percentage - a mark that tied them with the Checkers in the Atlantic Division standings, although Charlotte would earn the division title by virtue of the regulation wins tiebreaker.

The Thunderbirds were a force on home ice throughout the season, with their 26 home wins standing as the most in the league, and they had a similarly strong surge late in the season to the Checkers - going 6-1-0-1 to close out the regular season.

The Checkers had their hands full with the Thunderbirds during the regular season - finishing with a 2-4-1-1 head-to-head record while going 0-3-0-1 in Springfield. Charlotte was, however, able to claim a point in two of the last three meetings.

HOW WE GOT HERE

After earning a first-round bye, the Checkers dispatched the Bridgeport Islanders in four games - taking both contests in Connecticut, dropping the next game on home ice and then rebounding for an impressive shutout victory in Game 4 to clinch the series.

The contests ranged across the board - each team won a low-scoring, one-goal tilt, while the Checkers also came out on top in a wild 7-6 double overtime thriller and blanked the Isles 4-0 in the close-out game.

The Thunderbirds also enjoyed a first-round bye by virtue of finishing second in the Atlantic Division, then took on Wilkes-Barre/Scranton in the next round. Springfield pulled off a three-game sweep of the Penguins, steamrolling their opponent by a combined score of 17-9 - with six of those goals surrendered in the final game of the series.

WHO TO WATCH FOR

Zac Dalpe - Charlotte’s leading goal scorer has kept that hot hand going into the postseason, potting a team-best five goals during the team’s second-round series. That includes a hat trick in Game 2, which was capped off with the game winner in double overtime.

Alexander True - In keeping the same trend, Charlotte’s overall leading scorer emerged as a top producer in the series against Bridgeport as well. True recorded multiple points in two of the four postseason games thus far, including a pair of helpers in the close-out Game 4.

Connor Carrick - Production from the blue line has been a key component for the Checkers all year, and Carrick has carried that into the postseason. The defenseman has four assists in four games thus far and has found the score sheet in each of Charlotte’s last three games.

Sam Anas - One of the league’s more prolific scorers over the last few seasons, Anas has continued to drive the Springfield offense in the playoffs. The forward racked up seven points (2g, 5a) during the Thunderbirds’ sweep of the Penguins, including a four-point performance in Game 3.

Matthew Peca - After a breakout offensive performance during the regular season, Peca joined with Anas to form a formidable one-two punch in their second-round series. The 29-year-old posted six points (2g, 4a) in three games and found the score sheet in every contest.

James Neal - Neal didn’t produce much in Springfield’s second-round series - posting one assist in three games - but the veteran brings a lot to the table for Springfield. With nearly 900 NHL games under his belt and another 110 Stanley Cup Playoff games to his name, Neal has plenty of experience to draw on, and he was nearly a point-per-game player for the Thunderbirds during the regular season - tallying 26 points (14g, 12a) in 28 games.

Joey Daccord handled the majority of the workload for Charlotte during the regular season, and the Checkers continued to go to that well in the postseason. Daccord started each of the four contests against Bridgeport, allowing four total goals across Games 1, 3 and 4. Game 2 was a roller coaster, with the Islanders notching six goals, but Daccord came up big when it mattered and earned the win.

The Thunderbirds utilized their tandem of Joel Hofer and Charlie Lindgren in their three-game sweep of the Pens. The veteran Lindgren started things strong with a 50-save victory in Game 1, then came back for Game 3, where he surrendered six goals on 32 shots but captured another win. Hofer got the nod in Game 2, stopping 34 of 36 shots and scoring a goal of his own in the victory.

Head Coach Geordie Kinnear on the Springfield Thunderbirds
"You look at them, Jame Neal scored 40 goals in the NHL, Sam Anas is an AHL All Star, Matt Peca has been in the NHL. It’s an elite hockey club. But we’re up for the challenge. It’s about how we play, you can focus on them a little bit but in the end if you don’t play to your identity and to your highest level, you have no chance of winning."

Kinnear on his team's defensive prowess
"We feel great about our goaltending. But it’s the team defense that we feel really good about, especially when we’re going on all cylinders and everyone is checking well and defending well. We’re a defend-first team."

Kinnear on the message to his team moving forward "The message is that as you move forward it gets harder to win hockey games. It’s down to eight teams now. It’s those little details that make us great at the end of the day. We’re a four line team that needs everyone going and everyone pulling the rope in the right direction. When we’re going and we’re playing fast and we’re playing smart, we’re a hard team to play against."

As always, every playoff game can be watched on AHLTV and listened to on the Checkers app on iPhone or Android.

The official watch party for all playoff games will be at Ed’s Tavern on Park Rd, where fans can watch the game and enjoy food and drink specials.