Round Two Preview: Checkers vs Bridgeport 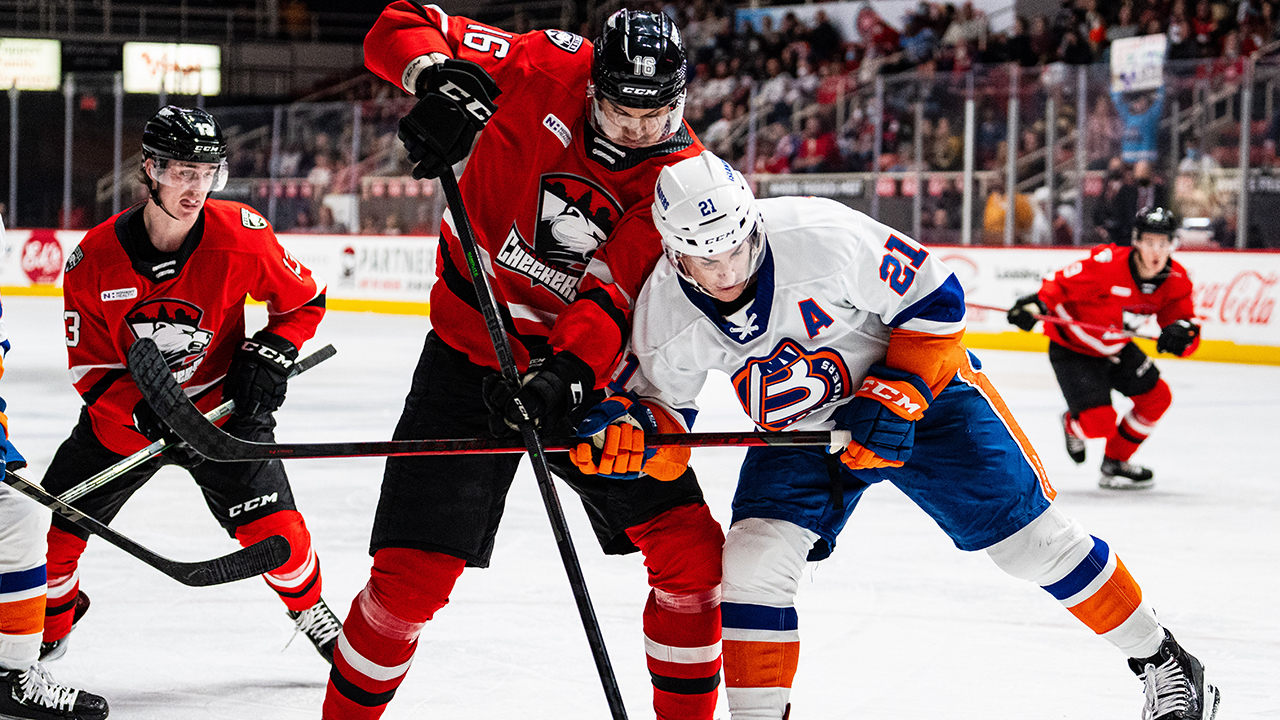 The second round of the Calder Cup Playoffs sees the (technically defending champion) Charlotte Checkers taking on the Bridgeport Islanders in a best-of-five series.

Charlotte: 42-24-5-1, 1st in Atlantic
Bridgeport: 31-30-7-4, 6th in Atlantic
The Checkers and Islanders squared off eight times during the regular season, with Charlotte emerging with a 4-4-0-0 record. The evenly matched season series saw the two squads alternate victories throughout the entire eight game stretch, while the Islanders held a 24-19 edge in total goals.

The Checkers have enjoyed a first-round bye courtesy of winning the Atlantic Division - that week off, coupled with finishing their season ahead of most of the rest of the league means they haven’t played a game since April 23.

Meanwhile Bridgeport, the final Atlantic team into the postseason, swept the Providence Bruins in the best-of-three first round. The Islanders won both contests in near identical fashion, downing the Bruins 2-1 in overtime twice.

Charlotte: 3.25 goals per game, 11th in AHL
Bridgeport: 2.96 goals per game, 21st in AHL
While the Checkers might not have been top heavy offensively - Alexander True’s 42 points were tied for the lowest by a team’s leading scorer in the AHL this season - depth was the name of their game. Charlotte had 10 different skaters reach at least 30 points this season - tied for the second most in the league - and was one of two teams with three 30-point defensemen. The offense was a bit scarce for Charlotte over the final stretch of the regular season, with the squad posting six goals over the last four games, but the Checkers still finished the year in the top third of AHL offenses and have a wide array of firepower - illustrated by the 17 times they scored at least five goals in a game.

On the other side, Bridgeport settled in the bottom sector of the league’s offensive rankings this season. Even so, the Islanders boast plenty of dangerous weapons on their roster - most notably former Checker Chris Terry, who racked up 30 goals and recorded a point-per-game in his 61 contests played.

Charlotte: 2.74 goals allowed per game, 4th in AHL
Bridgeport: 3.14 goals allowed per game, t-20th in AHL
The Checkers have stood as one of the stingiest teams in the AHL, especially down the stretch. Charlotte surrendered two or fewer goals in 16 of their last 22 and allowed an average of 2.00 goals per game over that run. Much of that success comes from the strong play between the pipes by the tandem of Joey Daccord and Christopher Gibson, with the former finishing the season tied for second in the AHL in save percentage and the latter turning in lights out performances since returning from injury.

Led by the duo of veteran Cory Schneider and prospect Jakub Skarek, the Islanders slotted in near the bottom portion of the league rankings and had a rough go heading into the postseason - Bridgeport surrendered at least four goals in six of their final 11 games during the regular season. The Islanders flipped the script in their first-round series against Providence, however, with Cory Schneider making 75 saves and giving up just two goals in over 140 minutes of play.

Joey Daccord & Christopher Gibson
The former went 10-2-0 in his final 15 appearances on the season and allowed 22 total goals across those contests while only giving up more than two in three of those outings. The latter is 3-0-2 in his last five appearances since returning from injury and surrendered seven goals along the way, holding opponents to one or fewer goals in four of his five games.

Aleksi Heponiemi
The Finnish forward led Charlotte in assists and posted 13 points over his last 17 of the regular season.

Zac Dalpe
The Checkers captain made history by becoming the fifth player in franchise history to score 30 goals in a season, and he enters the postseason having produced nine points over the final 11 games of the season.

Cory Schneider
The veteran of over 400 NHL games starred in the Islanders’ first-round sweep of Providence and held opponents to two or fewer goals in six of his last eight appearances during the regular season.

Chris Terry
Bridgeport’s leading scorer ended the regular season with 15 points over the last 11 games and posted three straight multi-point games to cap the season. Terry, who recorded one assist in the Islander’s two-game sweep, also posted seven points (4g, 3a) in six games against Charlotte this season.

Cole Bardreau
The veteran forward posted 25 points during the regular season, but seven of those came in seven matchups against the Checkers.

As always, every playoff game can be watched on AHLTV and listened to on the Checkers app on iPhone or Android. Game 3 and (if necessary) Game 4 will also be broadcast on ESPN 730 AM in Charlotte.

The official watch party for all playoff games will be at Ed’s Tavern on Park Rd, where fans can watch the game and enjoy food and drink specials.