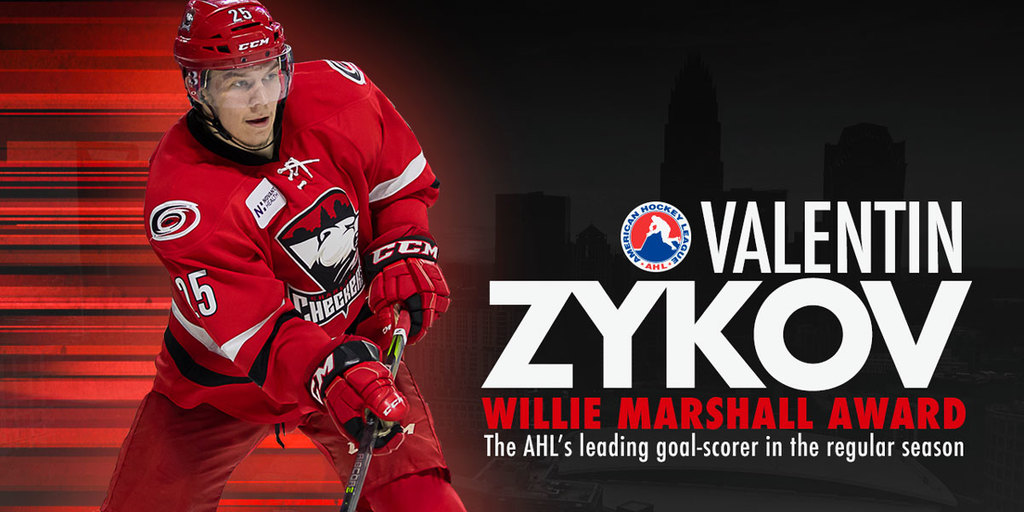 The American Hockey League today announced that Valentin Zykov has earned the Willie Marshall Award as the league's top goal scorer for the 2017-18 season.

Zykov, who scored a career-best 33 goals during the campaign, is the second Checker to ever win the award, joining Zach Boychuk in 2014. Zykov's total is the third highest in team history behind Boychuk's 36 in his award-winning season and 34 by Chris Terry during the team's inaugural AHL campaign in 2010-11.

The 22-year-old native of St. Petersburg, Russia, also led the league with 17 power-play goals and set an AHL record for highest shooting percentage (29.5 percent), scoring his goals on just 112 shots. He more than doubled his goal total in each of his three seasons in the league, going from seven as a rookie in 2015-16 to 16 last season and now to his league-leading total of 33.

Zykov, who also recorded seven points (3g, 7a) in 10 NHL games with the Carolina Hurricanes this season, finished second on the Checkers with a career-high 54 points.

The Los Angeles Kings' second-round draft choice (37th overall) in 2013 who the Hurricanes acquired via trade in February of 2016, Zykov has 102 points (56g, 46a) in 174 career AHL games with Ontario and Charlotte.