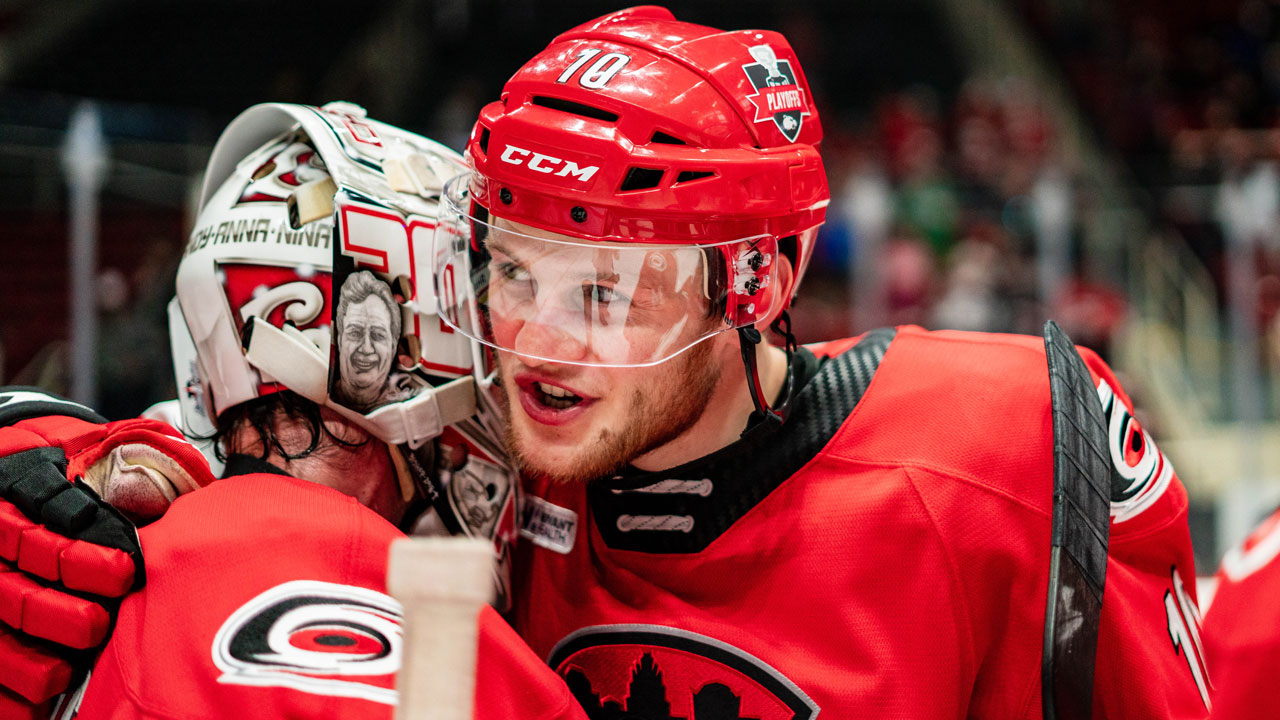 After taking care of business in a two-game set against the reeling Columbus Blue Jackets early in the week, our new parent club split its two-game series against our old parent club as those two teams, along with Tampa Bay, continue to jockey for first in the Central Division.

Including Thursday’s matchup, the Panthers had dropped six consecutive games to Carolina heading into their final regular-season meeting on Saturday. It looked as though it would be seven games until former Checker Gustav Forsling scored the first of three consecutive Panthers goals that culminated in an overtime winner by Aleksander Barkov.

The result of the recent infighting is that the Central race is as close as ever, with the big three separated by just two points. Carolina has the upper hand in both points and points percentage – an important distinction as the first-place club will avoid a grueling 2/3 matchup in the first round of the playoffs that begin next month.

Florida, which has just seven games remaining, will face off against teams battling for the division’s No. 4 seed this week as they play Nashville and Chicago twice each.

Huby is serving ? them ? UP tonight! pic.twitter.com/zTif5yLGI5

It’s been an excellent stretch for the group of Panthers prospects in Syracuse as their 7-1 victory over Utica on Sunday marked their fifth straight victory. They’ve jumped up to third in the North Division at 15-8-1.

Lucas Carlsson, the defensive prospect that Florida acquired from Chicago along with Lucas Wallmark at the trade deadline, had a huge week with two goals, four assists and a plus-6 rating in four games. Also on defense, former Checker Chase Priskie returned to the lineup for the first time since Feb. 20 and picked up an assist on Sunday.

Our ECHL affiliate continued to pick up important points as the Swamp Rabbits went 2-0-1 in a three-game set against South Carolina – one of the teams on their heels in the playoff race. At 25-10-3 on the season, they remain in third and are nine points clear of the cutoff line, though fifth-place Jacksonville – who they will play their next four games against - does hold four games in hand.

Goaltender Ryan Bednard finished the week at 1-0-1, stopping 46 of 51 shots to improve his goals-against average to 2.45, good for third in the league, and even chipped in an assist on Sunday. Fellow Panthers prospect Patrick Bajkov had a goal and an assist on Friday, finishing a stretch of 14 points in 13 games.