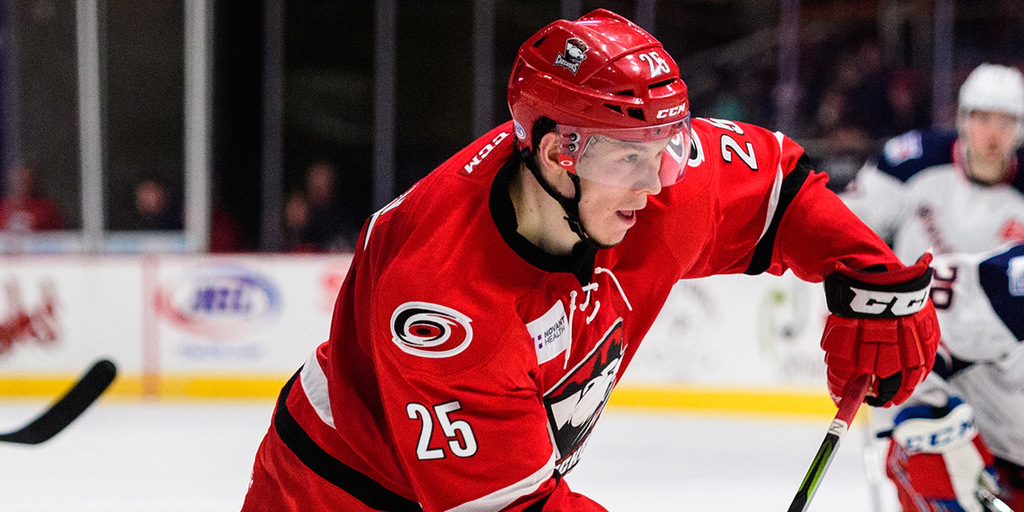 With their season now concluded, the Carolina Hurricanes have provided reinforcements for Charotte's upcoming playoff run.

The Checkers, who clinched a spot in the Calder Cup Playoffs by way of Saturday's 7-3 win over Hershey, will have forwards Valentin Zykov and Nicolas Roy and defensemen Haydn Fleury and Roland McKeown at their disposal for the remainder of the regular season and playoffs. They were the only players on Carolina's roster that were eligible to play in the AHL for the remainder of this season.

Zykov, who is still tied with former Checker Chris Terry for the AHL lead with 32 goals despite not having played in the league since March 18, posted seven points (3g, 4a) in 10 NHL games with the Hurricanes this season. He returns to Charlotte on an active eight-game point streak (7g, 4a) and has an opportunity to both win the AHL's Willie Marshall award as the league's top goal scorer and to break the franchise record for goals set by Zach Boychuk during his own award-winning season in 2013-14 (36).

Meanwhile, Charlotte also gets top options back in the form of McKeown, who ranks second on the Checkers and tied for second in the league with a plus-35 rating, and Roy, a rookie center who made his NHL debut on Saturday and ranks tied for fourth on the Checkers with 27 assists.

The addition of Fleury, who has only played one AHL game this season while spending the rest of the season at the NHL level with Carolina for the first time, provides a further boost. The Hurricanes' first-round draft choice (seventh overall) in 2014, Fleury posted 26 points and a franchise-best, plus-16 rating as a rookie with the Checkers last season.