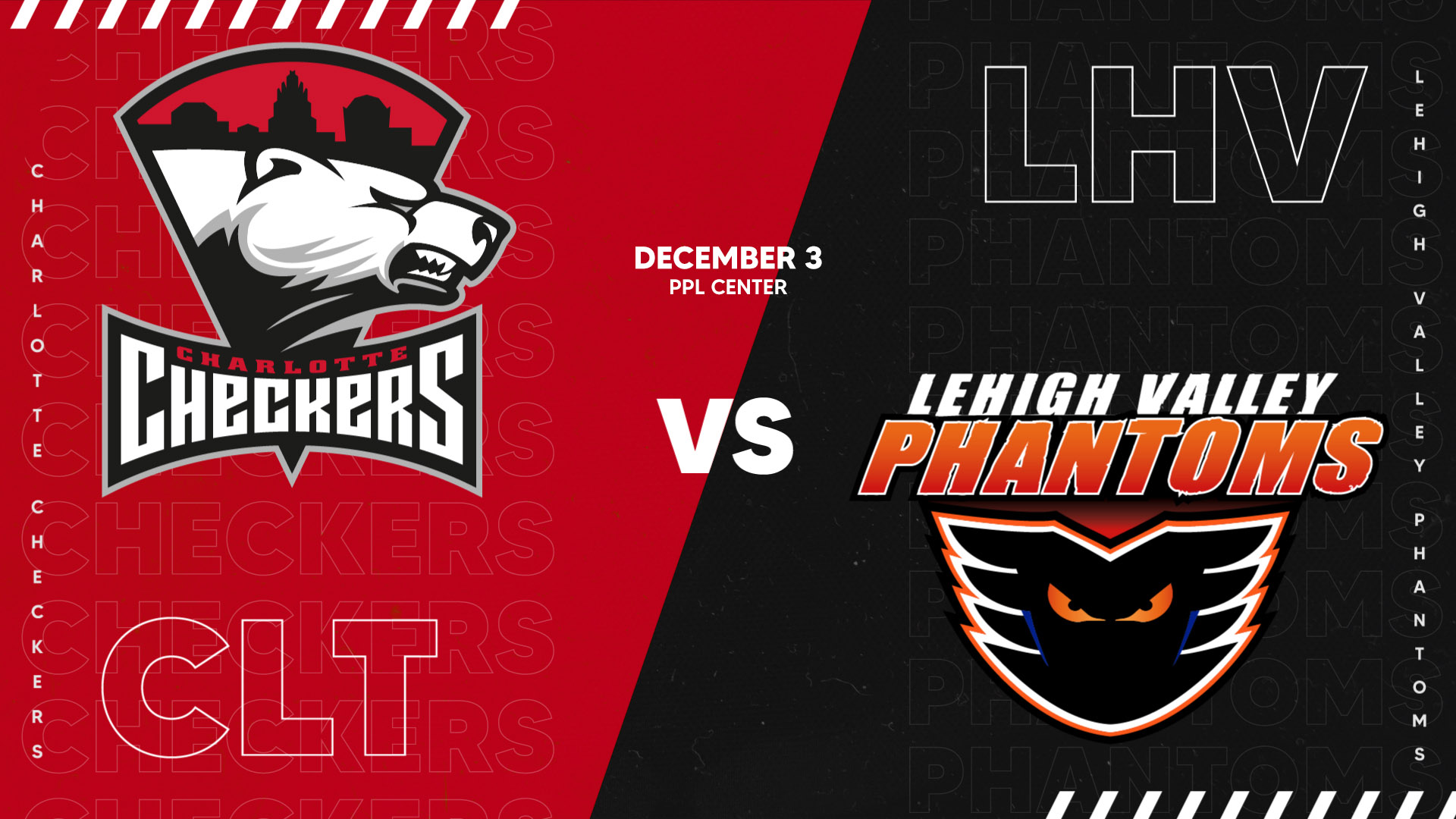 After a quick breather for a few practices, the Checkers are right back in action this weekend, kicking off a busy three-in-three weekend with a matchup in Lehigh Valley on Friday.

Injuries have piled up in both Florida and Seattle lately, leading to a string of recalls from Charlotte. Over the last week Riley Sheahan, Aleksi Heponiemi, Matt Kiersted, Joey Daccord and Kole Lind have all joined their respective NHL clubs. Because of those moves, the Checkers have added three players on professional tryout contracts - defenseman Frank Hora and forwards Max Zimmer and Liam Pecararo - as well as recalling netminders Evan Fitzpatrick and Antoine Bibeau from the ECHL. All together the Checkers’ roster holds 14 healthy options up front, but just six on the back end, as John Ludvig continues to be sidelined with an injury.

The Checkers and Phantoms have already locked in three of their eight matchups this season, with Charlotte taking two of the three previous contests. The Checkers offense has come to play in those meetings, totaling 14 goals across the three games - including their season-best seven-goal outburst on Nov. 6.

The Checkers and Phantoms have already locked in three of their eight matchups this season, with Charlotte taking two of the three previous contests. The Checkers offense has come to play in those meetings, totaling 14 goals across the three games - including their season-best seven-goal outburst on Nov. 6.

The Checkers finished the month of November with a .474 points percentage, marking the first time since 2014-15 that the team will enter the month of December with a record under .500. The Checkers currently sit in sixth place out of eight teams in the Atlantic Division, however, an improvement over the 2019-20 season in which they sat in last place in the Atlantic Division on Dec. 1 before ending the season in third.

THE CAPTAIN COMES THROUGH

The Checkers finished the month of November with a .474 points percentage, Zac Dalpe has been a consistent offensive force for the Checkers over the last month of play. The Checkers captain has posted five points in his last seven games and eight during the 11 games he played during November, tied for the second most on the team over that month.

Head Coach Geordie Kinnear on the focus of practice this week
"We want to execute better. Getting chances in key moments of the game. That just comes with confidence and working hard and doing the right things all the time. It starts in practice so that when you get in those situations you want to make sure you bear down and have a plan and execute."

On the trend of starting strong but losing leads
"I think there’s different reasons each game. In the second periods of a lot of these games we’re taking a lot of penalties, so guys are getting taxed and you lose the rhythm of four lines, so now in the third period you don’t have as much juice to get it done. We’re a young group, we’re still learning our way."

On keeping a positive attitude in the room
"That’s not an issue with this group. It’s the right mood all the time. We’ve got great guys - not just older players but second or third-year players that are good people, first and foremost. When you’re that and you’re coachable, trainable and hungry, you’re always going to get better."

On the importance of getting the offense rolling
"You look at the 1-0 game against Utica, it's a playoff-type game, we have to find ways to score those goals, not crossbars, not leaving seconds and thirds in front, in the back of the net. We have to take that next step in that department."

Tonight's contest starts at 7:05 p.m. in Lehigh Valley, and as always you can listen to the game for free via the Checkers app on iPhone or Android. You can also watch via the league’s AHLTV service.

And new for this season, our friends over at Ed's Tavern on 2200 Park Road are going to be showing the game on their TVs!