After failing to register any offense in last night’s home opener, the Checkers used a dominant power play and some late-game heroics to upend the Manitoba Moose 3-2.

The Checkers shook off last night’s shutout quickly, jumping out to an early lead thanks to a pair of power play tallies inside the first six minutes of play. After having several chances last night that didn’t find the back of the net, getting that scoreless monkey off their back relieved a lot of pressure for the home team, who finally notched the first goal in the newly-renovated Bojangles’ Coliseum.

“It was important,” said Morris of getting on the board early. “There are a lot of enthusiastic people that want us to do well and we’ve obviously worked hard to get ourselves in a good situation, and you hate to let that dwindle. I was happy that we had something to show for it.” 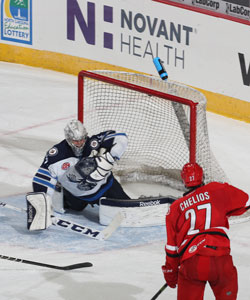 The Moose didn’t fold, however, netting a pair of goals to tie the game at two in the waning minutes of regulation. But it was the Checkers’ power-play attack that struck yet again, with defenseman Jake Chelios ripping a one-timer top shelf with 25 seconds remaining to lift the Checkers to their first home victory.

“That seam was open the whole game and you kind of just know to go back door with it,” said Chelios of his game-winner. “Shuggy got the puck, was patient with it and just made the perfect pass. It was just a tap-in.”

Having their lead evaporate was obviously a letdown for the Checkers, but their strong leadership core kept their team from rolling over, instead mounting pressure all the way down the stretch.

“It’s important for us as leaders to make sure the guys are upbeat, have a lot of energy and aren’t fading away,” said newly-named team captain Derek Ryan, whose seventh goal of the season was the team’s first at home. “After giving up a two-goal lead we want to make sure we’re upbeat and ready to go and we were doing that.”

“We’ve got a really young team, so when those guys like Ryan and [T.J.] Hensick step up and keep the guys positive after they tie it up like that it’s big,” said Chelios. “It’s a young team and you want to keep the confidence high like that and we did.”

Joakim Nordstrom, on a conditioning stint from the NHL’s Carolina Hurricanes, scored the Checkers’ second goal on the same sequence as Ryan. Ryan’s came at five-on-three while Nordstrom’s was on the more traditional five-on-four. All five of the game’s goals came on special teams, with the Checkers going 3-for-6 on the man advantage and Manitoba going 1-for-4 with a shorthanded goal.

“Obviously our power play was on point,” said Ryan. “I think we can still be better at five-on-five and score more goals, but that being said I thought we created a lot.”

Already shorthanded on the back end thanks to an injury to Keegan Lowe, the Checkers were dealt another blow when, according to Morris, Tyler Ganly may have taken a puck to the face during warmups and did not return to the game. That loss gave the team only five available defensemen, including Justin Agosta, who was making his AHL debut. But even with the shuffling, the Checkers’ patchwork blue line was able to craft a solid game.

“It was a great response, especially with all the things that happened,” said Morris. “Justin Agosta came in and did a fabulous job for us on the back end. You can’t say enough about all the back end with playing with five D with all the ice time they’ve had in the last 24 hours. I thought our response was pretty darn good.”

Rasmus Tirronen manned the crease for the Checkers, marking his second start of the season and the first time all year that Drew MacIntyre did not play. Despite the two goals surrendered, the rookie netminder was strong in goal and kept a hungry Manitoba attack at bay.

“I was happy for Tirronen,” said Morris. “Tirronen played very well for us and we executed when we had to.”

After this weekend’s quick turnaround, the Checkers will use this week to regroup and prepare for two more contests this coming weekend against Milwaukee on Friday and Saturday.

“We’re going to give them a day off tomorrow because they’ve earned it,” said Morris. “That was a pretty stressful game and they played a hard game last night too.”