Needing a win to get back in playoff position with 10 games to play, the Checkers earned a big one in Chicago.

Sergey Tolchinsky scored twice for his first multi-goal game as a professional and Derek Ryan, who was playing his fifth game in six days in four different cities, tied a franchise record with four assists as Charlotte routed the Wolves by a 7-3 score on Wednesday.

With the victory, Charlotte leapfrogged the idle San Jose Barracuda to reclaim the hotly-contested fourth spot in the Pacific Division bracket. Both teams next return to action on Saturday, which for the Checkers marks the first of two games in Manitoba that will conclude their seven-game road trip.

Though Charlotte announced its intentions early when Tolchinsky scored his first of the game on a tic-tac-toe passing play with Andrew Miller and Ryan just 1:46 into the game and Kyle Hagel followed suit with a tally of his own on a delayed penalty at 4:17, the Wolves would claw back into the game to make it 2-2 midway through the second. 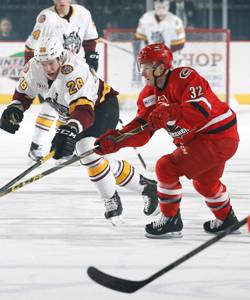 Less than a minute after that tying goal by Jordan Caron, Patrick Brown gave the visitors the response they needed by capitalizing on a turnover and firing a shot past goaltender Jordan Binnington to restore the Checkers’ lead. That would prove to be the first of three unanswered Checkers goals over the next six minutes, with Tolchinsky and Miller breaking Charlotte’s 0-for-19 slump on the power play. Tolchinsky’s goal would chase Binnington from the game, with Pheonix Copley coming in to relieve.

A goal by Jake Chelios early in the third made the rest of the period mostly a formality, with Chicago’s Ty Rattie and Charlotte’s Blair Jones trading goals down the stretch.

The offensive explosion by Charlotte, which had scored two goals or fewer in each of its previous four games, tied its season high for goals in a single game set twice previously. Ryan, who played three consecutive days in Charlotte over the weekend, had Monday off and then played for the parent Carolina Hurricanes in Raleigh on Tuesday before going on to rejoin the Checkers in Chicago, marked the ninth time that a Checkers skater has enjoyed a four-assist game.

The only potential blemish on the game is that the Checkers, who were already without seven players due to injury and were thus forced to play the game with 11 forwards and seven defensemen, were without the services of Miller and defenseman Rasmus Rissanen for the latter portion of the contest.

The Checkers are just .001 ahead of San Jose in terms of points percentage, which the AHL is using this season to determine playoff seeding. Their current playoff position is under the league’s crossover rule, which would allow the fifth-place team in the Central (Charlotte) to qualify if it has a better percentage than the fourth-place team in the Pacific (San Jose) … After losing its first two games against Chicago this season, the Checkers finished the series with points in each of the last six meetings (4-0-2) … Trevor Carrick finished with 12 points (3g, 9a) in the season series … Prior to tonight, Ryan was responsible for four of the Checkers’ last five goals and was the only Checker to score in their last two … Tolchinsky tied his season high for shots on goal (six) for the second consecutive game … Checkers goalie John Muse stopped 25 of 28 shots to improve to 4-0-0 against Chicago this season. He has now played 10 of a possible 11 games since rejoining the Checkers and owns a 5-2-1 record with the team … Forwards Anthony Camara, Dane Fox, Brock McGinn, Justin Shugg, Ethan Werek and Valentin Zykov and defenseman Danny Biega all missed the game due to injury.