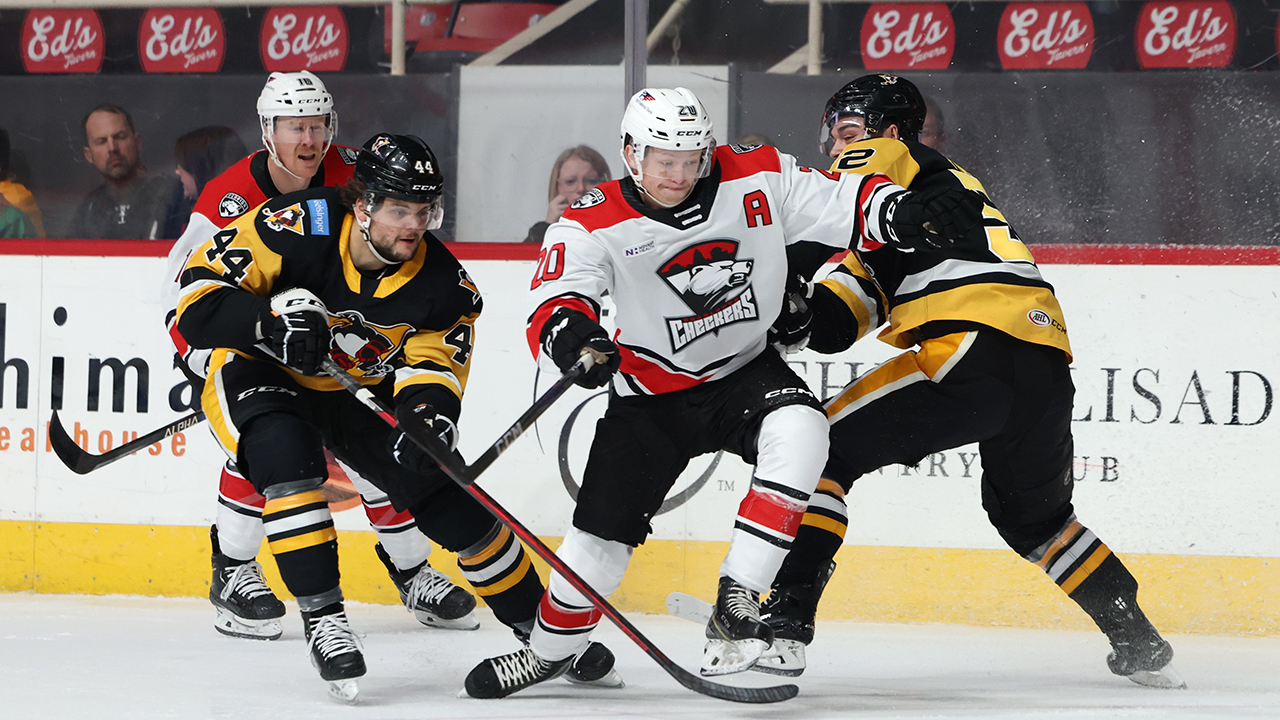 The Checkers’ hot streak came to a halt on Thanksgiving eve, as they fell to the Penguins 5-2.

Despite surrendering the opening tally early in the first, the Checkers started off the middle frame by evening the score courtesy of a quick shot from Henry Bowlby. The game would be blown open shortly after, however, as the Penguins struck three times in less than three minutes to surge ahead 4-1 after two periods of play.

The Checkers would cut into the advantage in the third as Michael Del Zotto redirected a point shot past Wilkes-Barre/Scranton netminder Dustin Tokarski, but it wasn’t enough to spark a rally. The Penguins would lock down from there and tack on a long-distance empty netter at the end to secure the 5-2 defeat of Charlotte and render the weekday series a split.

SCORE SHEET PHOTO GALLERY
Coach Geordie Kinnear on the game
We knew coming into the game that (Wilkes-Barre/Scranton) was going to be a hungry team. It’s a really good hockey team and I think they won six in a row at the start of the season for a reason. I thought they were a little more hungry than we were tonight.

Kinnear on giving up three goals in three minutes during the second period
The normal things that we’re supposed to do, we didn’t do and that’s usually the way it happens when you break down. They have enough talent to be able to make you pay and they made us pay. We lost focus for a little bit there, they scored some goals and now you’re chasing them.

Kinnear on what his team could do better to convert chances
Just a little more determined and a little more competitive to score goals. I thought there were chances but I didn’t feel like we fought hard enough to be able to score those goals. Again, I have to give them credit because I thought they were the more hungry team tonight.

Kinnear on the next few days
We have to figure out tomorrow what we’re going to do as a group because we play a 4 o’clock game on Friday. I’m obviously proud of the guys because it’s been a real tough stretch – one of the toughest stretches I’ve been on since I’ve been in the American League. I’m proud of the guys and how they grind, but we’ve got to stick with it and be focused on what we need to do to be successful and what type of team we are. We’ll get back to that on Friday.

The Checkers’ win streak ended at four games, tying their longest of the season … This marked the second time the Checkers gave up three goals in a period. The previous time (at Hartford on Nov. 12), was also in the second period … Del Zotto extended his point streak to three games (1g, 2a) … After going a combined 4-for-8 on the power play on Monday, the teams were a combined 0-for-4 tonight … Checkers scratches included forwards Riley Bezeau and Ethan Keppen, defensemen Dennis Cesana, Max Gildon, Zach Uens and Johnny Ludvig, and goaltender Alex Lyon.