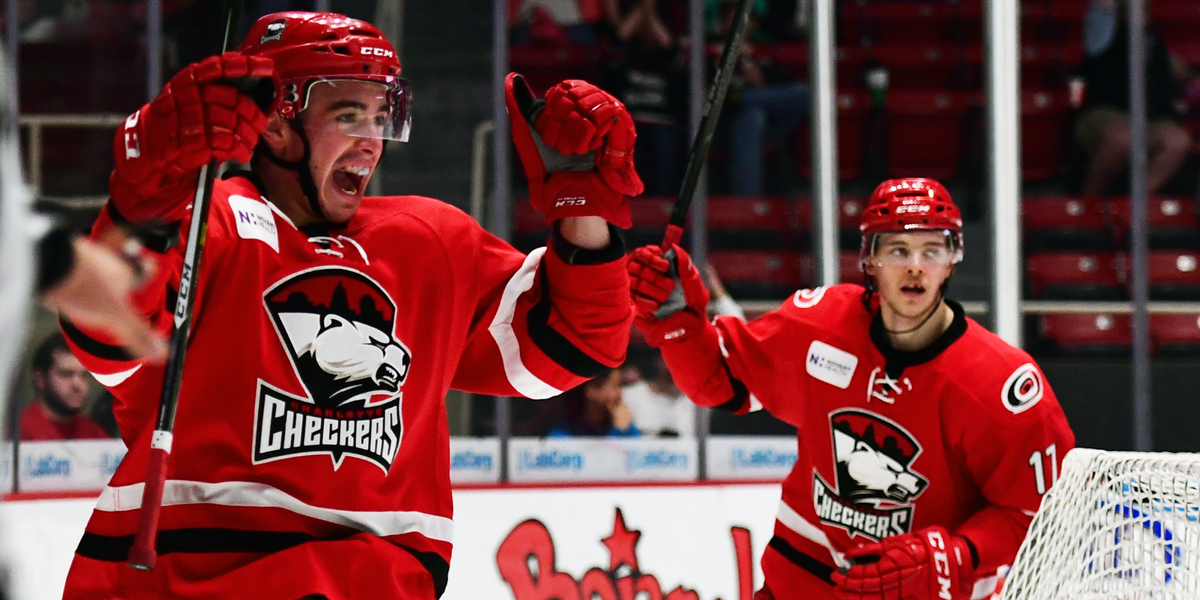 In a high-scoring back and forth battle, the Checkers fought their way back to pick up an overtime win against their Central Division rival Cleveland Monsters.

After the Monsters broke through in the first, the two clubs traded tallies over a whirlwind two minute stretch, with Andrew Poturalski and Patrick Brown pulling the score even through 40 minutes of play. The visitors responded with a pair of strikes in the third to build their first two-goal lead of the night, but the Checkers wouldn’t relent.

Just 19 seconds after Cleveland’s fourth goal, Levko Koper kept a loose puck alive behind the net and banked it in pull Charlotte back within one. Then it was Brendan Woods, back in the lineup after a 45-game absence, who tied things up, ripping a wrister that beat Monsters’ netminder Anton Korpisalo short side less than a minute after that.

Neither side could pull back ahead in regulation and the contest moved to overtime. The Checkers wasted no time in the extra frame, with Poturalski and newcomer Danny Kristo springing out to a 2-on-1 where the latter would set up the former for his second of the night to lift Charlotte 5-4.

Score SheetPhoto GalleryHighlights
Head coach Ulf Samuelsson on his team’s performance: “I thought we were just OK to start off with and not sharp with our passing play, but as the game progressed I thought that got better. A lot of credit to our guys for staying with the game plan when we went down by two there, and it was great to see our fourth line get two huge goals there.”

Samuelsson on his team battling back: “As soon as we got down two, we said, ‘Let’s go for it.’ We were forechecking hard with two D joining every time because we didn’t have too much time there. We managed to keep some energy on the bench.”

Andrew Poturalski on the game-winner: “We kind of had the full ice for the two-on-one – I’m not used to those – but I gave it to Danny [Kristo] and he made a heck of a fake. Kind of even faked me out a little bit, but he put it on my tape and I put it in the open net. It was a great play by him.”

Samuelsson on his overtime strategy: “It’s funny – a couple of days ago we had Myles, our video coach, break down all the (overtime) goals scored in the NHL, and we we’re a little more firm tactically – we don’t always go for it. You saw that rush, we defended it and then we get a loose puck, win a battle and that’s where your two-on-one is. You’ve got to play with certain strategies a little more than we have been.”

Poturalski on his first goal: “Coach tells us every day to get stuff to the net, and in the first period we were kind of struggling there. In the second we bore down and got to those greasy areas where most of the goals are scored in today’s game. It was a great shot by Fleury and I was lucky to tip it.”

Brendan Woods on his first game back from injury: “I can’t complain at all. I’ve got to give a lot of credit to my linemates for making it easy for me and for getting the nerves down for me, because they could tell I was a little nervous. It was good to get a win the first time back, and I’m just excited.”

Woods on returning ahead of schedule: “Sometimes when you have a couple of days to think about it – you’re always in your head thinking about what it’s going to be like, so having the short notice kind of helped me out. I tried to prepare as best I could, and thankfully I think I played pretty well.”

Poturalski on the team’s mentality down the stretch: “It’s pretty much a playoff battle right now, where every day feels like a playoff game – especially against these guys. It’s huge to get that extra point, and we’ll be ready tomorrow.”

Charlotte now trails Cleveland by three points in the standings with one game in hand. As of tonight, the Checkers would have to catch both Cleveland and Iowa to make the playoffs … Poturalski extended his point streak to seven games (4g, 5a), which ties the longest by a Checker this season (Brock McGinn). His 37 points are the third-most by a Checkers rookie in a single season (Zac Dalpe, Victor Rask) … Charlotte improved to 16-6-1 on home ice this season … The home team has won all five games of the season series between Charlotte and Cleveland thus far, with the Checkers taking the last three … Forward Danny Kristo and defenseman Philip Samuelsson made their Checkers debuts after joining the team via trades earlier in the week … Sergey Tolchinsky (nine games missed) and Woods (45 games missed) both returned from injury … Forwards Patrick Dwyer, Kyle Hagel and Mitchell Heard and goaltender Michael Leighton missed the game due to injury … Forwards Bryan Bickell and Erik Karlsson were healthy extras.

The Checkers will continue their six-game home stand with a rematch against Cleveland tomorrow night at 6 p.m.