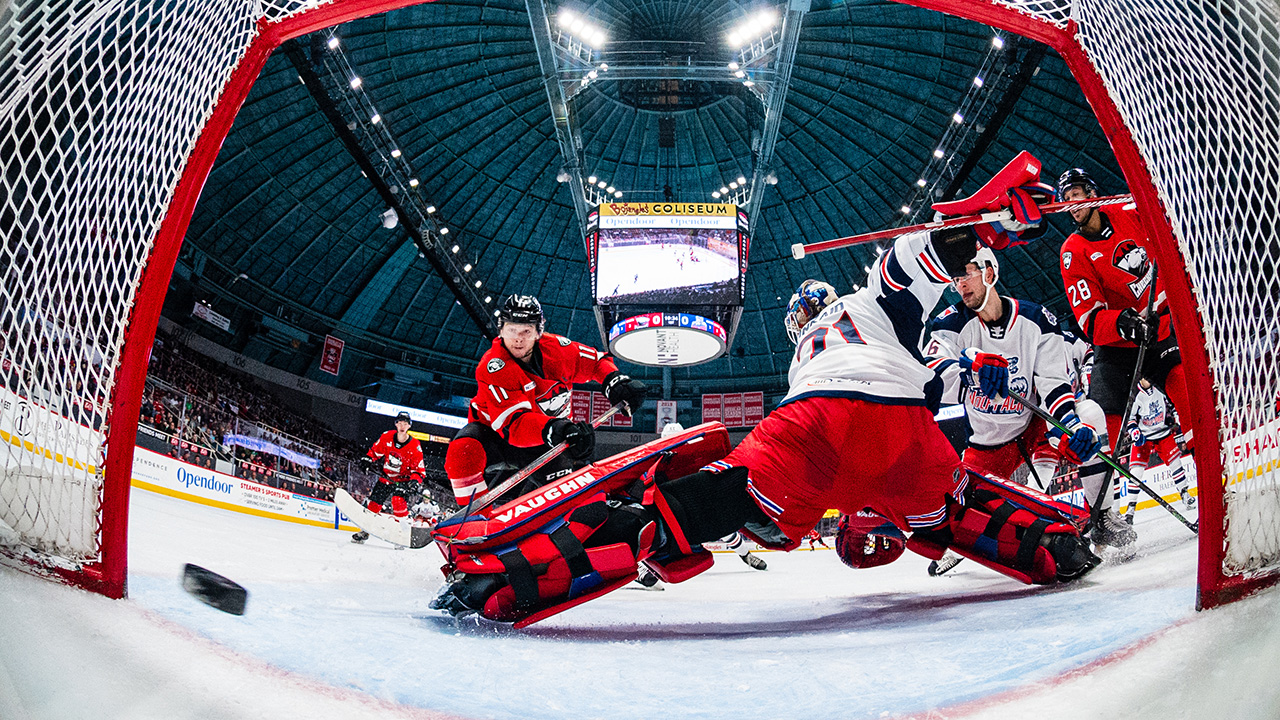 The Checkers continued their home-ice domination with a 3-2 win over Hartford, clinching a Calder Cup berth in the process.

Charlotte set the tone early, as Cole Schwindt and Luke Henman both banged in goals to push the home side ahead 2-0 heading into the first intermission.

A slick backhander on the penalty kill from Alexander True would give the Checkers a three-goal cushion early on in the final frame, and that would prove to be the eventual difference. Hartford made a push with two quick strikes in the final five minutes, but the Checkers rode out the remainder of regulation without breaking.

With a final count of 28 saves, Joey Daccord picked up another win and helped the Checkers become the first team in the Eastern Conference to clinch a spot in the playoffs.

SCORE SHEET PHOTO GALLERY
Coach Geordie Kinnear on clinching a playoff spot
It means you get a chance. The regular season is about being able to get a chance to get in, and we’re in. It’s a real positive day for us.

Kinnear on his team’s recent hot streak
What I really like is that we have people stepping in when guys go down or when we change the lineup. You see (Christopher Gibson) plays the other night and does well, and then (Daccord). It doesn’t matter. Max (McCormick) went down today and a lot of guys stepped up. Serron (Noel) stepped up. I’m proud of the group. It’s a real positive step and we want to keep building.

Kinnear on Henman scoring a goal after sitting out the last two games
He probably didn’t like his last game and had to sit on it for a little bit, but when you work hard and you’re a good person and good teammate, when you get your chance you’re going to make the most of it. He made the most of it tonight. To be able to win in the end, you have to have people step up and make plays in key times, and he did that tonight.

Kinnear on Max McCormick
He’s a very, very tough kid and a big part of what we’re doing. He’s been a big player for us all year and I’m just glad the guys got the win for him. He’s a tough kid and he’ll be fine.

Zac Dalpe on clinching a playoff spot
It’s great. I was talking to the guys, and I haven’t had this much fun in a while. To come to the rink and play this way and play for this group of guys, you’ve got guys standing up for each other. It’s not even about the fights, it’s about the tight-knit community that we’ve created with two organizations. A job well done, but it’s a ‘What have you done for me lately’ league. We’ll celebrate the win and the clinch tonight, but then we’ll put it to bed and we’ll come back to work on Sunday

Dalpe on the team coming together at this stage of the season
That’s what you want. You want to play your best hockey in March and April and that’s what we’re doing. I think we’re doing a good job of being a five-man connection. I don’t want to give away too many secrets but it seems like that’s the way we need to play, and obviously great goaltending too.

Luke Henman on clinching a playoff spot
It feels really good. We put in a lot of work all year. It is a grind, but we’ve got a great group of guys in there, we work hard for each other every day and it’s really starting to show on the ice. We’re really happy but we’re not satisfied yet.

Henman on scoring in his return to the lineup
It feels great. Whenever I get in the lineup I just want to contribute any way I can, keep working hard and good things will happen. I’m happy with the win tonight and we’ll get back to work for Sunday.

The Checkers are headed to the playoffs for their fourth consecutive season … This marks the first time the Florida Panthers’ AHL affiliate has qualified for the playoffs since Portland did so in 2015-16 … The Checkers have won five consecutive games for the first time all season and extended their franchise record point streak at home to 14 games (12-0-2) … The Checkers are 16-0-0 all time against Hartford at home and are 4-0-0 in the overall head-to-head series this season … True has three goals in his last four games … Aleksi Heponiemi had an assist to extend his point streak to three games (0g, 4a) … The Checkers are tied for second in the league with 12 shorthanded goals. True is one of five members of the team that have two … Max McCormick left the game after an open-ice collision with Hartford defenseman Jarred Tinordi in the first period and did not return … Grigori Denisenko, John Ludvig, Max Gildon and German Rubtsov missed the game due to injury … Patrick Giles, Dennis Cesana and Antoine Bibeau were healthy extras.