Checkers Blank Wild to Close in on Playoff Position

To kick off a pivotal series against their division rivals, the Checkers rode a strong performance by Tom McCollum to a 1-0 victory over the Iowa Wild.

Neither team seemed to be able to find offensive traction for the majority of regulation, with the Wild holding a slight 23-19 edge in shots. But it wasn’t until after the halfway point of the middle frame that either side broke through, when Lucas Wallmark connected on a one-time feed from Kris Newbury on the power play to put the home squad on top.

Charlotte settled in defensively from that point and kept the Iowa attack in check, denying their chances through the rest of regulation thanks to 23 saves for Tom McCollum, who turned in his first shutout as a Checker and moved his new club within two points of the Central Division’s final playoff spot. 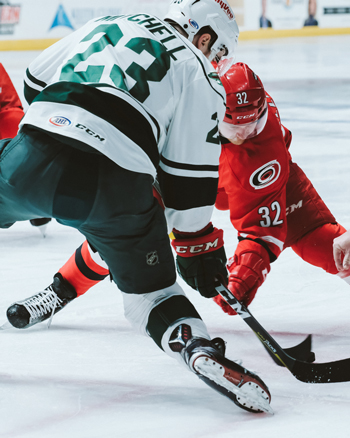 Score SheetPhoto Gallery
Head coach Ulf Samuelsson on tonight’s game:
“It was a little bit of a strange character to this game. It wasn’t as intense as the Ontario series but there was still a lot of battle out there. A lot of skating and I thought we forechecked real well. Defensively I thought we played a solid game.”

Tom McCollum on his game:
“Everything just seemed to be going my way. I got a ton of help from the guys in front of me. I gave up a few sloppy rebounds but they did a really good job of tying up sticks and clearing the puck out of there. That always makes a goalie’s job a lot easier.”

Samuelsson on Tom McCollum:
“He was big, he was solid, he moved the puck well and it seems like he’s seeing the puck real well right now.”

Samuelsson on the low-scoring nature of tonight’s game:
“Defense usually wins championships, a lot of smart people have said. We certainly have worked a lot on that, but we’re not trying to take anything away from our skill game because I feel that’s a big part of our game. Tonight we weren’t as sharp as we can be with the puck, and a lot of plays in the neutral zone and around their blue line we didn’t execute, so that’s why we didn’t get as many scoring chances as we’re used to.”

McCollum on starting several games in a row:
“It’s definitely something I’ve done before, but I’ve never gone with that long of a break and then had to turn around and play all the time. The coaches have done a great job of managing our practice time to help us conserve our energy, and fortunately I’ve got Michael Leighton still here because he’s a guy that’s been through it a lot and he’s a great guy to lean on and learn from.”

McCollum on what he expects from Iowa tomorrow:
“That’s a very talented team over there, and I’d expect them to come out even harder than they did tonight and shooting everything because that’s what good teams do.”

Charlotte is now just two points behind Iowa with a game in hand and can climb into a playoff spot with a win in tomorrow’s rematch … The Checkers’ five-game win streak is their longest since they went on a season-high, six-game run from Oct. 28-Nov. 11. It is tied with Hershey for the longest active win streak in the AHL … McCollum’s shutout was the eighth of his career and first since another shutout against Iowa on Feb. 27, 2016. Including one game with Stockton prior to joining the Checkers, he is now 5-0-0 with a 1.50 goals-against average and .951 save percentage in the AHL this season … This was the Checkers’ fifth shutout of the year, with McCollum being the third goalie to get one (Leighton 3, Nedeljkovic 1) … The Checkers’ 19 shots on goal were a season low … Wallmark’s goal was his 23rd of the season, tying Zac Dalpe’s team record for most by a rookie in a single season (2010-11). He has goals in four of his last five games and extended his point streak to five games (4g, 3a) … Andrew Miller’s assist on Wallmark’s goal was his 16th point (5g, 11a) in his last 12 games … Kris Newbury’s assist gave him eight points (4g, 4a) in his last 12 games. He had just nine in his first 32 … The Checkers’ power play has scored twice in its last three games, equaling its goal total from the previous 11 contests … The Checkers have 21 wins at home this season, putting them just one away from tying the franchise record set in 2010-11 … Forwards Bryan Bickell, Clark Bishop, Kyle Hagel, Erik Karlsson, Danny Kristo and Brendan Woods and goaltender Michael Leighton missed the game due to injury … Forward Hudson Elynuik was a healthy extra.

The Checkers and Wild will square off again for the eighth and final time this season tomorrow night. A win would put Charlotte in a tie for the final playoff spot with Iowa.